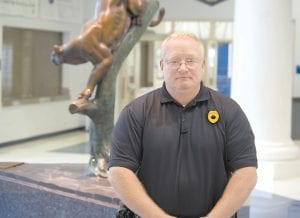 JAILER ELECT BERT SLONE faces a serious overcrowding problem in the jail when he takes office in January. Slone, 47, who is a lieutenant in the Letcher County Sheriff ’s Department, has been a deputy sheriff and city police officer for 24 years, and school resource officer at Letcher Central High School for 13 years. He has been married to Donna Slone, a 21-year veteran deputy jailer, for 30 years. (Photo by Sam Adams)

Letcher County’s new jailer will have an old problem facing him when he takes office next January — a jail that is housing more than two and a half times the number of prisoners for which it was designed.

“One of the major issues we’ll have to deal with is overcrowding,” Jailer-elect Bert Slone said. “The jail is extremely overcrowded.”

Jailer Don McCall, who is retiring after this term, said the jail is designed for 54 inmates. As of Tuesday morning, it had more than 143 inmates with no way to move any out.

Slone, who won the Democratic Primary last week and is unopposed in the fall, was already aware of the overcrowding before the election. His brother is McCall’s chief deputy, and Slone’s wife has been a deputy jailer for 21 years.

He said he’s talking with McCall to try to figure out a solution, and is studying jail regulations to learn what he can and can’t do. Slone said the county doesn’t have any money for a bigger jail, and even if did, it would just mean more prisoners would fill it up. He said he hopes to find another solution that will relieve the overcrowding, and the pressure on inmates and employees. 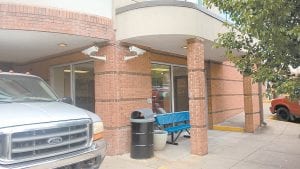 Located in the basement of the Letcher County Courthouse in Whitesburg, the county jail was built for 54 inmates but this week was home to 143 men and women. To make matters even worse, the jail was designed to hold just eight female inmates, but now holds more than 30 women.

McCall said part of the problem is state prisoners have to stay in the jail until the Department of Corrections can accept them, and state prisons are overcrowded as well. The state pays local jails to house those prisoners, but that hasn’t made any difference in getting them transferred either.

“Five years ago, if we needed to transfer some prisoners out, we could call another jail and they’d take them because you get paid for state prisoners,” McCall said.

Now, all the other jails are overcrowded, too, and they won’t accept any more transfers.

The jail has installed a toilet and shower in its multi-purpose room, which was used for GED classes, church services, and other activities, and turned it into a dormitory. A storage room formerly used for canteen supplies was also converted to a cell.

Commonwealth’s Attorney Edison Banks said part of the grand jury’s responsibility is to inspect the jail, but it hasn’t done so this term. He said he doesn’t know what can be done when the jury does inspect it.

“Used to, we thought it was awful to have 70 or 80 in the jail. Now that would be just wonderful,” Banks said.

Banks said he didn’t want to use the term “halfway house,” but said some sort of minimum-security holding facility might be an answer.

“You could have these less violent felons staying there, and save your more secure facility for the really bad ones,” he said.

But running a second facility would cost money, and the Letcher County Jail’s budget is already $1.1 million next year, nearly as much as the county spends on roads and bridges.

From a financial point of view it’s better to keep more state prisoners because of the payments the county said.

“The more of those state inmates we can hold, the less of a drain it is on the county budget,” Judge/Executive Jim Ward said.

But, Ward said the county won’t have that choice with the jail as overcrowded as it is.

“What will happen is they’ll start jerking some of our state inmates we’ve got out and putting them somewhere else,” he said.

The county gets no money for prisoners before they’re convicted, and the state Department of Corrections is letting some of its inmates out early because of overcrowding.

Judges are also setting bail for new arrestees and releasing them quickly on surety and unsecured bonds, but even that hasn’t reduced overcrowding, McCall said.

“The only thing I can think of (to help) is some kind of large, regional drug treatment facility,” McCall said. “Ninety-eight percent of these folks are addicted to drugs,” McCall said.

McCall said a new drug rehab program offered by Mountain Comprehensive Health Corporation has helped. He said the jail can take prisoners with substance abuse problems there for medical and mental evaluation, and MCHC will take them to rehab.

“They’re getting them into rehab faster now than I’ve ever seen,” McCall said.

So far, McCall said he hasn’t seen a lot of those people come back to jail, but the program hasn’t been in place long enough to know what the long-term effect will be. Even with the movement of some inmates to rehab, the influx of methamphetamines keeps the jail population growing. The 143 inmates in the jail Tuesday was up from 125 two weeks ago.