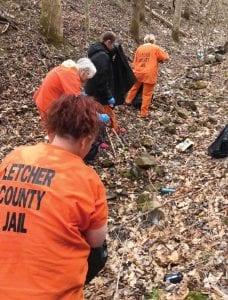 Letcher County Jail inmates have been working hard at cleaning up litter strewn across Letcher County. This photo was taken recently at Fishpond Lake at Payne Gap.

Spring cleaning in Letcher County is turning up truckloads of litter thrown out along the roadsides and in yards, and officials say those who won’t stop trashing the county will face jail time or fines.

Residents have been complaining about the increase in garbage, and have been posting pictures on social media in attempt to draw the attention of local authorities.

Frank Campbell, a retired game warden who lives at Letcher, is administrator of a Facebook page called Letcher County Garbage Patrol, which features pictures of illegal dumps and roadside litter posted by members. Some are from remote locations where people go to ride ATVs and relax, but many are taken beside the roads in residential communities.

“A lot of people seem to be interested in cleaning up the county,” said Campbell, noting that the Facebook page also includes pictures of people cleaning up their communities. “The politicians are finding more interest.”

For years, the mantra has been that people need to be educated about how bad litter is, but Campbell said, people are educated now, and there’s no excuse left.

Officials say they don’t want to see it either. Letcher County Jailer Bert Slone has added women to the eligible prisoners for work release, and they have been primarily picking up litter. Male prisoners are cutting weeds and trees and patching potholes in county roads, but still managed to pick up a truckload of garbage on Little Shepherd Trail. The women had picked up 1,070 bags of garbage between March 1 and April 4, Deputy Jailer Elena Johnson said. Johnson supervises the women on work release.

“We are committed to cleaning up our county,” Judge/Executive Terry Adams said. “That’s my whole concern — that we make the county look better for tourism and for the people who live here.”

The county used to have a litter warden, a county employee who was made a special deputy by the county sheriff, but Deputy Judge Jason Back said he had been transferred to the back of a garbage truck during the last administration. Adams has transferred him back to his old job, and so far the county has collected more than $35,000 in past due garbage bills. In addition, Back said, the warden is in the process of getting criminal summonses for people he has been able to identify by sorting through illegal dumps.

The county is also going after people who refuse to clean up around their homes when they are in view of a public road. Sheriff Mickey Stines said he has gone with litter warden Darrell Banks to three houses so far, but that Banks has gone to others as well.

“We’ve seen a lot of garbage, a lot of tires, we’ve seen some boats full of trash,” Stines said. “Basically, what we’ve done is go and tell them they have 30 days to clean it up.”

If they don’t, Banks will obtain criminal summonses from the county attorney, and the sheriff ’s department will serve them, Stines said.

This month, the county has the garbage transfer station at Millstone open on Saturdays as well as weekdays, and residents can bring their large items there with no fee. Residents who aren’t able to take large items themselves can call the county judge’s office at 633-2129 and ask for the garbage department to pick them up. The Whitesburg Recycling Center will also accept items such as appliances most places in the county. Residents can call 632-2267 (632- CANS) to schedule a pickup.