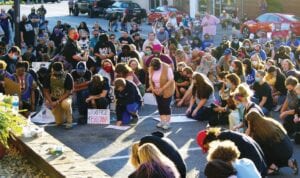 NINE MINUTES OF SILENCE – Protesters knelt in front of Whitesburg City Hall for eight minutes and 46 seconds in memory of George Floyd, who was killed by a police officer kneeling on his neck. They were participating in a peaceful protest in Whitesburg on Friday evening remembering Floyd and Breonna Taylor, who was killed by police in Louisville in March. (Photo by Sam Adams)

Letcher County Judge/Executive Terry Adams had to face angry citizens Monday morning, and again at the Fiscal Court meeting Monday night after he posted a piece on his personal Facebook page on Sunday criticizing people who participated in Friday night’s Black Live Matters protest in Whitesburg.

After the post was noticed by protesters and their supporters, Adams made it private. When one person posted it to his official page, it was deleted twice.

The post said the protest was held by “a small group of leftists who want to stir the pot on racism that rarely exists anymore except in their minds.” He also compared protesters to Hitler, and seemed to accuse protesters of being from somewhere else.

“Our little county is not a racist hotspot but you have people come in and have what they call a ‘peaceful protest’ Why??? To stir up trouble!!! To alienate our police officers!!! And to draw attention to what doesn’t exist here!!!” Adams wrote. 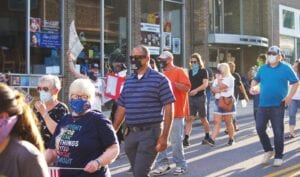 In reality, the vast majority of the nearly 200 protesters Friday night were from Letcher County, with a few coming from surrounding counties. Several police officers, bystanders and protesters confirmed that they recognized nearly all of the people as being from Letcher County. Some expressed surprise that so many local people did show up in support of the protest.

A group of about a half-dozen protesters went to the courthouse at 8:30 a.m. Monday to confront Adams about the Facebook post, a meeting that ended with a few heated words before protesters left. Adams added an apology “if I offended anyone” to his page later in the day, saying that “I may not be as connected to the entire population of our county as I thought.” He said he does not condone discrimination.

“I will admit that I make mistakes and intertwining local issues with national is a mistake that I made and I apologize for that,” he wrote.

Protesters called it “halfhearted,” and said it didn’t address the real issue — not that he might have offended someone, but that it was wrong. 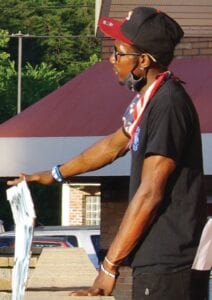 Nearly 20 returned to the courthouse that night, with many signing up for the public comment section of the meeting.

Adams got in the first word, telling residents that he was sorry if he caused any offense, but “I have to protect Letcher County.”

Dayjha Hogg, of Whitesburg, who is biracial and married to a white man, told Adams and the members of the court to “open your hearts and ears and listen a moment.”

“Imagine there’s no COVID, it’s normal society and you walked around as if you have the plague,” she told them, recounting white workers at drive-through windows who are afraid they might touch her hand.

She said she knows many in the black community here who have had to hear derogatory terms for their race and accept it, because it wasn’t safe to speak up. She said she has never been to Walmart that she hasn’t been watched, and she heard “the N-word” every day in school.

“You couldn’t even have watermelon in the lunchroom because you just didn’t want to deal with it,” she said.

Nate Thompson, who served as emcee at the protest, opened his remarks by telling the court about his father, the late Truman Nathanial Thompson. The elder Thompson was a member of the Whitesburg Fire Department for 34 years, its first African-American chief, and was widely known and loved in the county. His father was, Thompson said, the first black fire chief in Kentucky, and a hero who saved lives of people involved in fires and car crashes his entire career. He questioned what it would be like if his dad had pulled up to a car accident and refused to help because the people involved were white.

“What if my dad had looked at them and said, ‘I can’t help them. They’re a different color than me. They might not want me to’?” Nate Thompson asked Adams. That never would have happened, he said, because “first and foremost, my dad was a servant of the public.”

He told of how a white man had seen his father crossing the street from the fire department, hit the gas pedal and tried to run him down with his car. When police chased the man down near the Virginia state line, he said, “I seen an N-word, so I thought I’d run him over,” Thompson said. His father didn’t seek charges.

“He said, ‘Don’t worry about it. Just make sure he doesn’t come back,’” Nate Thompson said.

Nate Thompson said he never had to worry about the police here harassing him because he was always in the police department and fire department as a child, and went to school with many of the people who are police officers now. Whitesburg Police Chief Tyrone Fields is his cousin. But, he said, he has three biracial children. And while the police here may be good to them, he said, what should he tell his son about going other places, where he isn’t known?

“Say he’s in Miami, Minneapolis or Los Angeles. What am I going to tell him then?” Thompson said.

And while he mentioned worries of other places, he assured the court that despite what was in Adams’s Facebook post, there is plenty of racism here. He said he encountered it first in seventh grade when his family moved from Jenkins to Whitesburg, and two boys yelled “the N-word” as he rode past on his bicycle. It really came home to him the first time he and a white girl decided they wanted a relationship. He said he had known her parents for years, and they were always friendly with him, until the moment they found out about him and their daughter.

“The very moment they found out, their daughter was dating a black person, they grounded her. They destroyed every gift I had ever given her,” he said. “These are people who had looked me in the eye, patted me on the back and said ‘I love you.’”

Fields, the police chief, also spoke up, in part to counter a statement by Tanya Turner, in which she asked why there were 20 police officers from around the county in town, when there are only six police officers on the city force.

Fields said there are only four certified officers, and that was not enough to keep everyone safe. He also said several people were stopped trying to get into the city to disrupt the protests, and the officers were needed for that reason.

But Fields also spoke about racism, telling the court that his mother is white and his father is black. He said from his perspective as a police chief, “it’s safe to say” that George Floyd, a black man who died after Minneapolis police kneeled on his neck for nearly eight minutes, was murdered.

“Any police officer who thinks he was not murdered should turn his badge in and go to the house,” Fields said.

He also said he disagreed with much of what Adams had to say in his Facebook post, and said as a public official he is very careful about what he puts on social media.

“We do have to be mindful of the things we put out there. We can’t retract it,” he said. “You know that, Judge. You know better.”

State Rep. Angie Hatton also spoke at the meeting, offering to facilitate a meeting to address differences between the judge and residents. Hatton, who spoke at the protest, assured Adams it was not something done by people from outside the county.

At the urging of citizens at the meeting, all five magistrates said they disagreed with Adams’s post on Facebook.

Adams declined to comment further on Tuesday, saying what was said at the meeting, “about covered it.”