County may look to space for faster Internet service 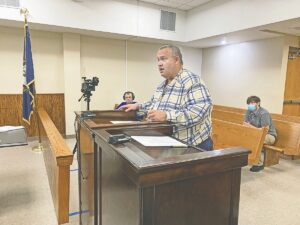 The Letcher Fiscal Court may turn its eyes toward the heavens for faster Internet service for the county’s residents.

At the court’s August meeting this week, county officials unanimously authorized Letcher Judge/ Executive Terry Adams to sign a letter of intent with the Appalachian Council for Innovation Inc. (ACI), to conduct “due diligence” toward determining whether Letcher County may qualify to space-based broadband Internet services.

According to the letter, Norton, Virginia-based ACI will work toward determining whether Letcher County residents would qualify, based upon population density, to receive satellite-based “Starlink” service from Elon Musk’s Space Exploration Technologies Corporation (Space X).

Letcher County Broadband Board Chairman Harry Collins told the court that the letter of intent would clear the way for ACI to begin “mapping” the county to determine the viability of offering the space-based Starlink broadband service, a technology he said is not out of reach for the county’s residents.

“Technology changes, delivery changes, so we want to at least take a look at and let that company and that organization look at our county and to see how much that particular delivery of Internet could benefit our county,” Collins said.

He added that the mapping work would be performed at no cost to the county.

The letter of intent does not bind the county to contracting with ACI. Instead, it only implies “that should the engineering for the proposed service be viable,” the county will proceed with the contracting process for the service and the required hardware. ACI, according to the letter, would be the “agent” for the service and would “contract with Space X for the hardware and services for two years for the onset of services.”

The discussion of the letter and the Space X Internet service came after the fiscal court opened a sealed bid for countywide high-speed Internet service submitted by Zoom Broadband Services in Lexington. Zoom’s proposal was in response to a request for proposal issued by the county.

According to Zoom’s proposal, the company stated it could provide broadband service to the county’s residents through a “hybrid” delivery of wireless and fiber optic lines at a total cost of $12 million. Providing the service through an all-fiber delivery would cost $30 million, the proposal said.

The court voted unanimously to provide Zoom’s proposal to the Letcher County Broadband Board for examination and consideration. Collins said the low-end cost estimate, the $12 million hybrid delivery method, is “a big bite” for the county to take. He added, however, that the county having its own network could be an asset in not only providing broadband service to residences, but also in attracting business to the county.

Collins said the increased occurrence of people working remotely or working from home during the COVID-19 pandemic had shifted the paradigm of Internet usage and has essentially shifted many people from simply being “consumers” in their Internet activity to now being “producers” conducting business on the World Wide Web. That paradigm shift, he said, may be the future of business in Letcher County if countywide high-speed broadband service is established.

“We haven’t had a whole lot of people beating down the doors to build a factory in Letcher County,” Collins said. “… But you can build a factory one house at a time with Internet connectivity.”

In other business at this week’s meeting, the fiscal court:

• voted to establish a 90-day “probationary period” for new full-time employees and employees transferring from part-time positions to full-time positions before they would be allowed to enroll in the county’s health insurance plan. The measure passed unanimously and took effect retroactively to July 19.

• approved a change in the administrative code addressing leave for employees for bereavement. The change allows for bereavement leave to be granted in the event of the death of mothers-in-law and fathersin law, as well as grandparents. Those relatives were not previously listed among those included in the code dealing with bereavement.

• voted to ask the Kentucky Transportation Cabinet to name a bridge on KY Highway 1103 at the mouth of Big Branch Hollow in honor of Edward Curtis Ison, a Vietnam veteran who served in the U.S. Army. Ison achieved the rank of SP4 in the military.

• voted to declare more than a dozen county-owned vehicles as surplus. Among those vehicles is a Ford Crown Victoria four-door sedan, which Magistrate Benny McCall said Jenkins Independent Schools had requested to be considered for donation of the vehicle if it became surplus. The court approved donating the vehicle to Jenkins Independent Schools for use by the district’s school resource officer. Judge-Executive Terry Adams said an auction would be set for the remaining vehicles, which includes several pickup trucks, a dump truck, a backhoe, and a tractor, as well as a wooden storage building.