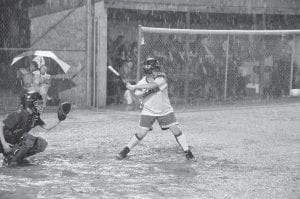 The sky opened up on the semifinal game between the Jenkins Lady Cavaliers and Powell County, causing a day and a half delay. The game, which officially began May 28, ended on May 30. Pictured here is Lady Cavalier Tazsha Hall taking her at-bat before the game was postponed. (Photo by Chris Anderson)

Letcher Central’s baseball team, the 53rd District runner-up, finished its 2009 campaign with a 16-17 recored after falling to Hazard in the opening round of the 14th Region tourney, 10-9 in eight innings. Hazard eventually lost to Estill County in the final, 5-3.

The 2009 season for the Jenkins Lady Cav softball team ended with a heartbreaking 3-1 loss to Powell County in the semifinals of the regional tournament at Breathitt County on Saturday. The Lady Cavs earned the right to play in the semifinals with a 15-0 rout over Leslie County on May 26 in game which senior Rachel Thacker pitched a one-hit, four-inning shutout and every Lady Cav batter got at least one hit and scored at least one run.

The semifinal game with Powell County actually began on Thursday evening with five innings played in heavy, intermittent rain before being delayed. The game started well for the Lady Cavs when shortstop Emily Walker reached base safely in the top of the first inning with a one-out single and advanced to second on a Lady Pirate error. The quick start was promptly negated when two Lady Cav base runners were thrown out attempting to steal.

Walker was thrown out attempting to steal third and pinch runner Mercedes Boggs was thrown out in a close play at second. Boggs had entered the game to run for catcher Hillary Brashear after her single provided the second Lady Cav base runner of the inning.

The Lady Pirates scored the first run of the game in the bottom of the second inning. A Lady Cav error along with a stolen base and two ground balls resulted in an unearned run, making the score 1- 0 in favor of Powell County.

The Lady Cavs would threaten again in the top of the third inning by loading the bases with one out thanks to a walk to designated hitter Sierra Kiser, a single by right fielder Sarah Belcher, and a Lady Pirate error on Walker’s ground ball. The threat ended, however, with a ground ball out and sharply hit line drive to the shortstop by cleanup batter Brooke Webb.

The Lady Cav defense kept the score close with an inning-ending double play in the bottom of the fourth. After making a play on a fly ball for the second out of the inning, left fielder Tazsha Hall fired a strike to catcher Hillary Brashear who tagged out a Powell County runner attempting to score from third for the double play.

The game was halted due to heavy rain with the Lady Cavs batting in the top of the fifth inning. The game was resumed on a sunny Saturday afternoon with left fielder Tazsha Hall at the plate and Sierra Kiser on first with no outs after drawing a base on balls. A Powell County error allowed Hall to reach first safely and Kiser to advance to second. Kiser later scored and Hall advanced to third on a single by Walker, but the inning ended when Walker was thrown out attempting to steal and Brashear grounded out.

Despite the regional loss, the Lady Cavs ended a very successful season that included 23 wins and 12 losses. During the season the Lady Cavs won their second consecutive 14th Region All A championship and their third consecutive 53rd District championship. In addition, senior pitcher Rachel Thacker and junior catcher Hillary Brashear were named to the 14th Region All Tournament Team.

The Lady Cavs will now look forward to next season with a squad that will return seven starters.