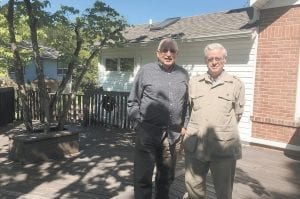 47-YEAR REUNION — Letcher County Sheriff Danny Webb (left) met up with Bob Doyle (right) of Hamblin, Pennsylvania for the first time in 47 years earlier this month. Doyle served on a tank with Webb during the Vietnam War in 1970. Webb said he received letters from Doyle after Webb returned to Letcher County, but that they lost contact after Doyle was severely wounded and sent home from Vietnam. Webb contacted Doyle through an association of Vietnam Veterans and invited him to visit Letcher County.

Letcher County will have to find a new county treasurer at the end of the fiscal year on June 30, when current Treasurer Phillip Hampton calls it quits after 37 years of serving the county. Following his monthly report at the May meeting of the Letcher County Fiscal Court, Hampton told the court of his decision to end his long term as county treasurer and, with his voice breaking, he said he had taken the office in 1981, following a dark time when the county had been taken over by the state, and said his 37 years made him the longest-serving county treasurer in the state.

The meeting was also slightly sidetracked by a heated discussion between Judge/Executive Jim Ward and Katricia Rogers, who has been a frequent critic of Ward and the court in recent months. Rogers began her statement by saying the delinquent sanitation accounts are up to $1.7 million, and Ward told her delinquencies had been as much as $6 million when he was first elected, and that many delinquents have settled their accounts since then.

Ward then asked Rogers about published comments attributed to her in which she was given free rein to vent her feelings about Ward and the court. The article reported, “Ac cording to Rogers, she and others she is working with, believe that the best thing for the county would be for it to finish the current fiscal year in the red ‘so that the state can take over. ‘That is what we want,’ she said.”

The article also referred to Rogers raising the issue of the Letcher County Recreation Center and its annual cost to taxpayers. The article correctly reports that the bond (loan) payment for the facility is paid by a grant from the county’s coal severance tax receipts, and the center’s operational costs are paid through income generated from sponsorships, membership fees, and reimbursements from health insurance plans. It states that “for the year, the Recreation Center more than covers its operating expenses” through revenue generation.

According to the article, Rogers also questioned the use of funds transferred from state-funded programs such as the Road and Bridge Account to other accounts until property tax revenues are available, and again, the article correctly states that this is a standard practice throughout the state and has been used for years by Letcher County and other counties as well.

After some initial denials from Rogers, Ward asked if the article was correct. William Banks, a freelance reporter who wrote the article for the Letcher County News-Press, was in attendance at the meeting and said he had written it and it was correct. Reading from the article, Ward said Rogers told Banks she was in frequent communication with three magistrates, Wayne Fleming (Fifth District), Bobby Howard (First District), and Terry Adams (Second District), who she said would be running for judge himself in 2018.

The News-Press article said the interview lasted for nearly three hours, during which Rogers told of her frustration with getting information from Ward’s office and with “what she termed the lack of transparency in government.” It also said she said she is frustrated with “the apathy of the public, the arrogance of the media and her distrust in the establishment, and what she believes is its role in obfuscating and undermining her efforts to obtain the truth.”

At that point Ward held up a set of folders that was about five inches thick and told Rogers, “Here is an open records request that you didn’t pick up.” Rogers replied that she had scanned the records with her cell phone but hadn’t taken them home with her. Ward said that with the county having financial troubles, the already diminished staff has been placed under additional stress to print out the records requested by Rogers and said the extra work had made it hard for his staff to get other jobs done.

Rogers attempted to return to the subject of garbage bills, and Magistrate Fleming said he would like to hear what she had to say. Fourth District Magistrate Keith Adams then said, “You all (Fleming, Howard, and Terry Adams) have met with her, she can tell you outside.” Ward then turned to Banks and Whitaker and asked if Rogers had asked for anything to be kept out of the article and Whitaker replied that she did not ask that any of her statements be off the record. Fleming said that Rogers has a right to ask for records and to speak at the meeting. Ward then said, “I have a right to run this meeting” and told Rogers, “Your five minutes are up. Sit down.”

Fleming told Ward he felt that Rogers’s right to free speech had been violated. He said he also believes that the county’s assessment of 50 cents per page for freedom of information requests is too expensive. After Rogers tried to speak up again Ward said if she spoke out he would have her escorted out of the meeting. As the meeting ended, Fleming said the three magistrates mentioned in the News- Press article were not involved in a conspiracy against Ward and that he talks to people every day without any conspiracy. Howard agreed and Ward said he was just going by what he had read.

In other business, Harry Collins, chairman of the Letcher County Broadband Board, reported that progress is being made in the effort to obtain affordable high speed broadband for Letcher County. Collins told the court that a sport utility vehicle now sports a magnetic sign identifying it with “Letcher County Broadband Board,” and that the board has received a matching grant through which it has hired an engineer to survey the Linefork area for broadband expansion. He added that last week, Letcher County was featured in an article in the largest circulation newspaper in Japan for its efforts to obtain broadband services for the county.

Collins said that at present, Jackson County and Owsley County are the state leaders in rural broadband connectivity, but that it is the Letcher board’s intention to surpass those efforts. He said he sees broadband as an answer to the economic puzzle that faces the county and as the backbone of a new economy that will allow young people to find good high-paying jobs at home rather than leaving the area.

In a related matter, Judge Ward announced a cross-country bicycle race along the Little Shepherd Trail on Saturday, May 20. Ward said the race will take place from 9 a.m. to noon, and the trail route will probably be closed a half-hour before and after race time.

Parks and Recreation Director Derek Barto reported that he had sent pictures of faulty playground equipment still under warranty to the company from which it was purchased, but was initially told the company would furnish new equipment but would not pay for the cost of labor to install it. Barto said that after further discussion the company agreed to pay for the labor costs as well. Ward said if the work is not done in the next month, he will direct Letcher County Attorney Jamie Hatton to take legal action against the firm.

Keith Adams said he wanted to offer his thanks to Channel 98 Producer Rick Hall, who has said he and his brother Jamie will continue to produce and show government meetings at no salary in order to allow people who aren’t able to come to meetings to see their government at work. Ward added that Hall knows how important it is to allow people to see it firsthand and said he hopes that soon the Hall brothers and other county workers will be back to work full time.

In other business, the court voted unanimously to adopt several resolutions and proclamations, including a resolution to name Morgan Lane in Jackhorn in memory of Private First Class Arthur E. Short, who served in the Third Army, 192nd Chemical Depot Company during World War II. Short received three Bronze Stars during the invasion of Europe, including one for D Day at Normandy Beach, one during the Battle of the Bulge, and a third at the Crossing of the Rhine River. Magistrate Fleming said not many people had gone through what Short did and called him a “true hero.”

Ward issued a proclamation honoring Whitesburg Appalachian Regional Hospital nurses, who received 2017 the Hurst Gold Standard of Nursing Award. Ward said the WARH nurses are a tremendous asset to the county and the court appreciates them.

The court voted to accept all roads and streets referred to in the County Road Aid Cooperative Program Contract with the Kentucky Transportation Cabinet, Department of Rural and Municipal Aid for FY 2017-2018. This allows for $1,169,384.98 in state funds to be spent in three separate distributions for upkeep and repair of the listed roads in Letcher County.

The court approved a resolution endorsing the Letcher County Water and Sewer Board’s request to enter into an interconnection agreement with Knott County Water and Sewer District for a line connection and a 150,000-gallon water tank to serve the Highway 7 corridor, and unanimously re-appointed current LCWSD Board Commission Members Diane Adams, Fred Webb, and Billy Stamper to another term.