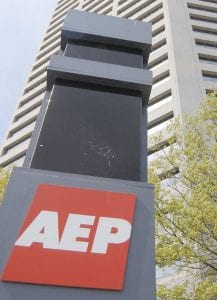 The headquarters for AEP, parent company of Kentucky Power, are located in Columbus, Ohio. The Letcher Fiscal Court wants members of the Kentucky General Assembly who represent the county to work to take away incentives from the company and any others that switch from coal to gas. (AP photo)

The Letcher Fiscal Court has voted unanimously to adopt a resolution asking state legislators who represent Letcher County to work to deny any state financial incentives to electrical power companies in Kentucky that move away from coal to natural gas.

The motion for the resolution was introduced at the court’s April meeting this week by District Five Magistrate Wayne Fleming, and comes less than a month after AEP’s Kentucky Power Company announced that it is considering converting its Big Sandy Unit 1 power plant near Louisa from coal to natural gas.

The plant, a 278-megawatt coalfired generating station, is scheduled for retirement in 2015. In lieu of converting the plant to gas, Kentucky Power Company is also seeking proposals from companies capable of selling up to 250 megawatts of long term capacity and energy to replace the generation that would be lost at Big Sandy. Those proposals are due by June 11.

Fleming said the move away from coal to gas by utility companies damages coal producing counties by taking away jobs as well as funds paid by coal companies into hospitalization and retirement plans for workers.

Fleming said if the trend continues it will eventually do untold damage to coal producing counties and asked other coal counties to join with Letcher County in petitioning the state legislature to follow suit. The court voted unanimously to support Fleming’s motion. The resolution also asks legislators to work to take back any incentives the state may have already given to AEP’s Kentucky Power and any other

Judge Ward, who seconded Fleming’s motion, also told the court he has been working on a solution to a question over mine inspections involving state mining officials and Cumberland River Coal Company. Cumberland River, a subsidiary of Arch Coal Inc., operates an underground mine that lies partly in Kentucky and partly in Virginia, where the coal is transported outside by conveyor belt. Ward said dual regulations and inspections have created a confusing situation at the Trace Fork mine and both states are working together to come up with a solution.

Ward added that while the matter is still not settled, the actual mine inspections and regulations will probably be done by Kentucky regulators while outside enforcement and inspections will be handled by Virginia.

In response to a question from Fleming, Ward said coal severance taxes are being paid to Kentucky for the coal mined in Letcher County.