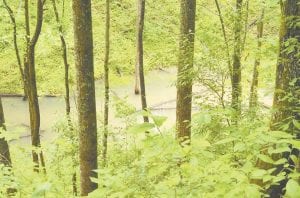 TROUBLED WATERS – A cove at Fishpond Lake was filled with muddy water Sunday after heavy rains washed silt from the ATV trail around the lake. The county will close some of the entrances to the trail in attempt to stop damage to the lake, a favorite fishing and camping spot. (Photo by Sam Adams)

Some unruly all-terrain vehicle riders have muddied the waters for everyone else.

ATV riders will have to enter and leave the Fishpond Lake trails by only two entrances after riders riding off trail and exiting the trail on the loop road meant for cars have caused siltation in the normally clear lake.

County Judge/Executive Terry Adams said he plans to close off all trail entrances except two — the original trail entrance at the old tennis courts, and a gas well road entrance near US 119.

“When I went up there after the rain, you could see the muddy water was getting into the lake,” Adams said. “That’s not being a good steward of the Fishpond area.”

Most of the exits on the loop were built by the county, but some were created when riders simply drove up and down the hills where no trails existed. At least two such illegal trails are between the paved road and the lake. A drive around the lake Sunday showed mud and water washing across the road in several places, and ruts created by ATVs attempting to climb steep hillsides.

Uncontrolled access to areas around Fishpond Lake by all-terrain vehicles is affecting the beauty and biology of the lake, a local water quality group said.

Headwaters Inc., of Whitesburg, isn’t advocating eliminating ATV access, but a board member told the Letcher County Tourism Commission, which now manages the lake, that something needs to be done to prevent mud dug up by ATV tires from washing into the lake.

“There are areas around that lake where soil is bleeding off, and those little coves are silting up,” Headwaters board member Jennifer Honeycutt said. “The more soil that gets in the water, the more nitrogen gets in it, and it affects the water chemistry.”

Nitrogen, she said, causes more algae in the water, which can take oxygen away from the fish.

Fishpond has long been known as a prime fishing spot, and the county prohibits gasoline motors on the lake because it is sometimes used as an emergency water source.

Adams said he looked at the site after the rain last weekend and plans to close off ATV access points that come out on the loop around the lake, leaving only an entrance at the head of the lake at the old tennis courts, and a gas well road that enters from the west end of KY 3400 where the road cuts off of US 119.

Honeycutt represented Headwaters at a Letcher County Tourism Commission meeting about the future of the lake two weeks ago. She noted then that there are several spots where water runs directly off the four-wheeler trails, across the asphalt loop road, and into the lake. She also cited erosion where the county placed a dock at the Boy Scout Camp, and where the county pushed dirt over the hill without barriers to catch it when RV sites were built a few years earlier.

“This past year it’s just been so bad with all the excess rain, it’s just exacerbated the problem,” Honeycutt said.

Adams said he talked to Tourism Commission Chair Missy Matthews on Monday about the situation, and will make the erosion control part of the work the commission plans to improve the lake. That work will include changing the layout of RV sites, building decks at the RV park, adding raised tent camping sites, improving the restrooms, and adding showers and laundry facilities.

By 1971, the lake was deemed too dangerous to swim in because of pollution, and mounds of litter piled up around it. The county undertook a massive cleanup that year. Rudimentary restrooms were built around the lake in the 1980s, but those were mostly destroyed within a few years. The county again started a revitalization of the lake about 2000, and it has been in much better condition for the past 20 years.