County will offer eight places to vote on November 3

First 1,100 paper ballots being mailed this week; requests must be in by Oct. 9 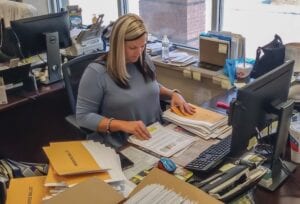 ABSENTEE BALLOTS WILL be in the mail this week to those who have already ordered them on the state portal. Pictured, Sharaye Whitaker prepares ballots for mailing in the Letcher County Clerk’s Office on Tuesday. (Photo by Sam Adams)

Voting will be a little easier this fall with the local board of elections expecting to open eight polling locations on Election Day, in addition to two early voting locations and absentee paper ballots.

Letcher County Clerk Winston Meade said this week that absentee paper ballots have arrived at his office, and the first batch was mailed out on Tuesday, with the rest expected to be mailed to voters who requested them on Wednesday.

“We’ve had a little over 1,100 requests so far. We had them right up until the day in the primary, but this time they’ve just got until October 9 to request them on the portal,” Meade said.

The portal is the state Internet site set up specifically for voters to request ballots. It is at www.govoteky.com. Meade cautioned that if voters request an absentee ballot, they will not be allowed to cancel that ballot and vote in person under the rules put in place by the state Board of Elections for this fall.

Any person voting absentee and attempting to vote in person also will be guilty of a crime.

Those voting absentee must mail their ballot no later than Election Day, or drop it in the drop box in Meade’s office by Election Day. Ballots dropped after Election Day or received more than five days after the election will not be counted.

For those who did not apply for a paper ballot, there’s early voting, which will begin Oct. 13. While there was only one early voting place during the primary, there will be two polling places for the General Election.

The first early voting location will be at the Letcher County Recreation Center on Jenkins Road in Whitesburg. That location will close at 4:30 p.m. on October 31.

The second will be in Meade’s office at the courthouse. That site will close at 4 p.m. Nov. 2.

Meade said the county will have eight polling places on Nov. 3, and any voter from anywhere in the county can vote at any of those eight stations.

Locations for Election Day polling places are as follows:

The Blair Branch Old Regular Baptist Church is a new location. The rest have been polling places in the past.

Meade said this week that he’s still waiting for notification from the state Board of Elections about voting machines for which he’s asked, but for now, he expects to have them for every polling place. As in the primary, the voting machines will be a ballot marking machine that will allow voters to stick a paper ballot in the machine and verify their votes before printing it. Once it’s printed, voters will feed the ballot into a scanner on site, which will count and store their vote.

For those voting absentee, election officials offered the following instructions for voters:

• Mark the ballot only once unless the ballot indicates more than one candidate can be voted for, and use a non-gel black pen. If a voter makes an error, he or she should mark the correct box and circle it.

• Place the ballot inside the brown inner envelope, and sign the flap. Any person who cannot sign their name must sign with an X and have two witnesses sign. Voters must not remove the flap from the envelope.

• Place the brown envelope with the ballot inside it into the outer white envelope and sign the outer envelope. Again, voters who cannot sign their name should sign with an X and have two witnesses sign as well.

• Either return the ballot by mail postmarked no later than Nov. 3, 2020, or drop the ballot in the secure ballot box in the clerk’s office before Nov. 3.