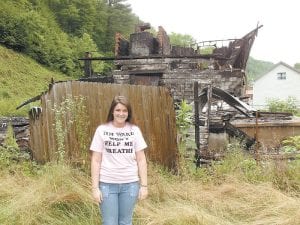 Thornton residents upset that a burned house hasn’t been removed under the county’s blighted and deteriorated property ordinance printed up T-shirts and had their children and grandchildren wear them to Monday’s meeting to get the attention of the Letcher Fiscal Court. Pictured on each side of the the ruins are (above) Breawna Vanover and (below, from left) Katie, Paul and Kinlee Breeding. All four suffer from asthma or other breathing problems, which their family members say have grown worse from their having to live beside the home which burned in November.

Letcher County workers narrowly held onto a two percent raise in the coming year, thanks to a motion by Fifth District Magistrate Wayne Fleming. At the June meeting of the Letcher County Fiscal Court, the Fiscal Year 2011–2012 budget was presented to the court with the raise left out, but Fleming told his colleagues he had promised at a meeting last fall that he would make certain a raise of at least two percent would be forthcoming and he would not go back on his word. The court voted five to one to restore the raise with Judge/Executive Jim Ward casting the lone no vote. Third District Magistrate Codell Gibson initially abstained but then cast his vote in favor of Fleming’s motion.

Ward told the court he was not voting no in order to deny the workers a raise, which he said they deserved, but said the tight budget and gloomy economic forecasts led him to fear that a raise now might lead to layoffs early in 2012. Ward pointed to surrounding counties and said that Knott County has completely scrapped its in-house work force and gone to contractors and that both Perry and Pike County were struggling. 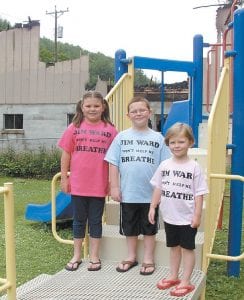 County Treasurer Phillip Hampton supported Ward’s position, saying that this year’s budget was the tightest in recent memory and that the county would be lucky to get to June 30, 2012 without layoffs as it was presented. Hampton told the court that cutbacks in coal severance tax receipts and other state funding had made it extremely tight. Fleming said the court would have to be much more selective in granting requests for county funding from the many groups that approach it during the year asking for money.

“If we get less than what’s anticipated, we’ll be in trouble,” said Hampton. “We will have to work with each group (county department) with line items for each one. If they spend it all then they will be out of money. And the next fiscal year will probably be even leaner.”

Fleming pointed out that a separate raise for salary workers had already been figured into the budget and said that the hourly workers are barely getting by as it is. Second District Magistrate Terry Adams seconded Fleming’s motion and said he feels like the hourly workers are the backbone of the county. Fleming added that Kentucky Governor Steve Beshear has said state revenues have begun to climb again and the national economy is getting better as well.

“I know that nobody doesn’t want them to have a raise,” said Fleming. “You have to vote your conscience. I hoped it would be more.”

Judge Ward said he didn’t want to be faced with the possibility of telling any county worker he or she was being laid off next spring. He added that he was afraid workers who got laid off would lose their health insurance as well.

“It’s a matter of seeing they get to work,” said Ward. “I’m not against revising it (later) if the economy gets better, but we want to make sure everybody has a job. I want them to have a raise but we are equally responsible to the county to keep us afloat and provide the services we provide. ”

The vote was called and the five to one vote restored the hourly employees’ raise. The court voted to accept it with the entire $10,180,232 budget (second reading) for the coming fiscal year.

In other business, the court attended to several other budgets that were presented from county agencies and voted unanimously to approve the standing order for re-occurring expenses. The standing order allows for monthly bills like the electric bill, phone bills, etc., to be paid when they are received without being voted on by the entire court in order to prevent late charges from accumulating if meetings fall after due dates.

The court also made an arrangement with Vernon Engle of Tri-Star Communications that could lead to Tri-Star customers having access to Government Channel 98 as well as the Letcher County Schools Channel. Engle told the court his system serves the western end of the county in Red Star, Roxana, and Hallie and said that he has done extensive work to restore the system with new fiber optic cable and will soon offer broadband Internet service as well as cable. Channel 98 producer Rick Hall told Engle he could easily hook into TVS at no charge to obtain both channels. However, Engle categorically refused to link his system with TVS, citing problems with TVS restoring service in his service area following the 2009 ice storm and saying he had other issues with the Hindman-based provider as well. Engle also said it is his understanding that the Letcher County schools district pays TVS to carry its channel.

Engle suggested placing a microwave transmitter on Pine Mountain at Mayking, but Ward said the court doesn’t have the discretionary funds for such an undertaking. Hall suggested a compromise, saying he would provide Engle with recordings of Channel 98 programming that he could then broadcast on Tri- Star. Engle said that arrangement would probably work but added that he might be interested in placing a microwave transmitter anyway. Engle said he took exception with published reports that he had refused to include the channels and added that he will attend the Monday, June 27, meeting of the Letcher County Board of Education to see if he can reach a similar accommodation that will allow him to show the school channel.

The court also voted to ask County Attorney Jamie Hatton to make changes to the County Ethics Code to streamline the Ethics Committee from nine members to five. Hatton told the court that the current code called for a nine-member board and that each member was limited to one term. He said he would bring an ordinance to the next court meeting. Hatton also told the court it needs to simplify its current personnel policies and administrative codes. He said he has no interest in changing intent but that the current policies and codes are unwieldy and need to be shortened and simplified. Magistrate Fleming agreed and volunteered to serve on a committee to examine both, along with Third District Magistrate Codell Gibson and Terry Adams.

Several citizens approached the court, including Valerie Breeding of Thornton, who asked about getting a burned house next to her home removed. Breeding said vapors from the house were exacerbating a chronic breathing condition her four-year-old daughter has and the child cannot go outside to play. She said her daughter’s condition has worsened in the seven months since the house burned and she now requires increased medication.

District Four Magistrate Keith Adams told Breeding the court and property owner have arranged for the house to be torn down and it should be down this week. He said a contractor was hired to take the house down but had problems with his vehicle and had been unable to work until it was fixed. He said the property owners had asked the county to set the demolition up.

Breeding said she has asked that the house be attended to since it burned to no effect. She said her daughter’s condition had been under control before the house burned but since then her use of medication had increased dramatically and said the county’s Blighted and Deteriorated ordinance should have been enforced a long time ago. Breeding said she had spoken with Jim Scott who has worked with the B&D Committee to identify blighted properties but said Scott told her he was not a committee member. She said the committee needs to publish a contact telephone number and its meeting times and dates as well.

Magistrate Fleming told the court that after all the time the committee has been around, hardly anything has been done to remove blighted properties. Judge Ward said a lot of properties have been identified but that issues with ownership have prevented a number of them from being addressed. He said the court has tried to remove properties without having property owners bear the cost and added if property condemnation proceedings go through the courts it takes a long time for any action to be taken too. County Attorney Hatton agreed that the public needs to have access to the B&D Committee and know who the members are and when and where they meet.

Magistrate Adams asked Breeding if she would like to be part of the committee and Breeding said she would think about it. She said if the building isn’t taken down this week she will pursue the matter in court. Breeding was accompanied by several neighbors and children wearing T-shirts saying ‘Jim Ward won’t help me breathe’. Another neighbor said she lived on the other side of the burned house and that her granddaughter had gotten ill after lying out in the sun and breathing the fumes.

Don Amburgey of Little Shepherd Theater gave the court a report on progress on the amphitheater and praised David Narramore and Phyllis Barker of Whitesburg for their help in painting background scenes and sets and also Wendell “Butch” and Donna Boggs of Jenkins for their help in obtaining a food booth. Amburgey said the ‘Little Shepherd’ drama will be presented every Saturday evening through September 3.

In other fiscal court business:

• Gary Rogers of the Letcher Fire and Rescue Department told the court that water coming from hydrants in the lower end of the county is very dirty. He said the department has gotten several bad loads of water to fill swimming pools and they were full of silt. Rogers also complained that some people in the Letcher area were burning old houses after removing shingles and then calling the fire department to make sure the fires didn’t get out of control. He said state law prevents fire departments from burning houses.

• The court voted unanimously to re-appoint Margaret Lewis of Jenkins and Jo Combs of Van to the Letcher County Library Board.

• The court voted unanimously to set speed limits at Chopping Branch and Shea Fork at McRoberts at 10 miles per hour.

• The court voted to name the following bridges and roads in honor of Letcher County veterans: