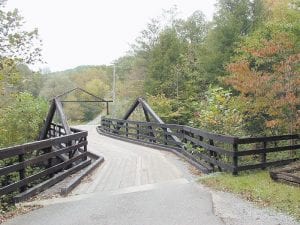 This wooden bridge was orginally built in the 1930s to provide access to Letcher County’s first golf course. The property is now considered one of the county’s most scenic neighborhoods. (Photos by Ben Gish)

The only suitable rolling land available was located just south of Mayking on the John H. Morgan farm, property which had been in that family many years and had been divided into three tracts. John H. Morgan’s son, John Morgan, owned the bulk of the land where the course was to be built. The other two tracts were owned by his daughters, Alley Morgan Blair and Minerva Morgan Edmiston, both of whom contributed small tracts in order to complete the golf course. This land is just south of Mayking and is bounded by the L&N Railroad on the west and the Kentucky River on the east with the south bounded by the Edmiston and Blair tracts. 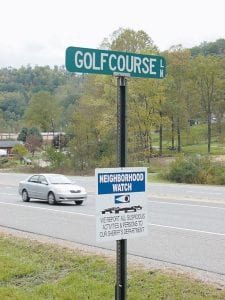 These signs mark one of two entrances to a neighborhood in Mayking, near Whitesburg, which once served as the county’s first golf course.

The L&N Railroad had provided a wooden bridge across the railroad on the north side, giving street access to the property. The WPA (Works Progress Administration) built a road around the perimeter which provided a loop around the entire property and that road remains today.

The first step in building the course was to construct a clubhouse, and it was built on a high knoll overlooking the course and the Kentucky River. The clubhouse was built using cut limestone and laid by the Italian families who had settled in Whitesburg. These included the families named Majority, Codospoti, Romeo and others. These families built bridges in the area, including the one to the Upper Bottom, as well as buildings such as the Presbyterian Church in Whitesburg and several homes.

The next step was to lay out a golf course, and it basically followed the perimeter of the property for the long holes with the interior land being used for shorter holes. There was only enough room for eight holes, so No. 6 hole had to be played twice. Some land was leased from the Blairs for a green and that space is still level today. The Edmiston family donated a small portion of green No. 2 in exchange for lifetime membership for their seven children. 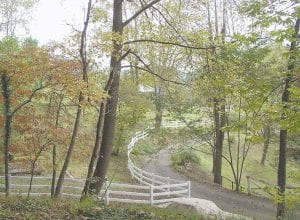 It’s not too hard to imagine that these rolling hills in Mayking were once part of a beautiful golf course.

A water tank was installed on top of the highest point on the property (now known as the Roy Crawford tract) which served to irrigate the course. The course was maintained well by using Fordson tractors and mowers. It was a beautiful and well laid out course, although I do not know who designed it. (I used to sleigh ride down the hill to No. 4 green. I did not have a sleigh,so I used the trunk lid from a 1937 Chevrolet, which was perfect with its curved shape on one end. This was a great ride.)

The course provided jobs for several local people including my relatives. My brother, Paul Edmiston, began caddying about 1938, and became an excellent golfer as a result of this experience. Paul was a regular caddy for Roland Price, who paid him fifty cents to caddy when other caddies received only twenty-five cents. Paul recalled one incident when lightning struck the clubhouse chimney splitting it and knocking him out of a nearby apple tree he was climbing.

The club prospered for three or four years until one Sunday morning the neighbors were awakened about 2 a.m. by a fire of unknown origin and the clubhouse was destroyed. The cause of the fire was never determined. I was only about five or six years old at the time, but I remember the blaze. After this fire the clubhouse never reopened and the golf course was closed soon afterward.

Some years later, the land was parceled out and a big auction was held. The W. P. Nolan family, who then owned The Mountain Eagle, bought the clubhouse property and rebuilt the structure into a house and renamed it Eagle’s Nest. The only remnants of the golf course are the stone benches at the No. 1 tee.

My cousins soon left and most joined the Army or Civilian Conservation Corps (CCC). Uncle John Morgan had to mortgage the land and he was only able to keep his home and a few acres.

Brother Paul was in the 1943 Whitesburg High School graduating class and all boys in the class were drafted into the military immediately after graduation. Paul had just turned 18 and the Captain who was the oldest man on his ship was only 25.

These are my recollections of the Mayking Golf Course, with much of the information being provided by my brother, Paul Edward Edmiston. We are descendants of the John Morgan family, an early Letcher County family.

Now living in Lexington where he served as city engineer, Jack Donald Edmiston is a graduate of Whitesburg High School and the University of Kentucky. He has been married to his wife Lois for 53 years. They have three children and four grandchildren, including triplets.