County’s only bookstore closing after 48 years 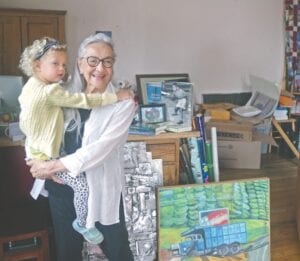 CLOSING UP SHOP Josephine Richardson holds her granddaughter, Marian Emilia White, inside the Cozy Corner in Whitesburg. The store will be closing at the end of the month after 48 years in business. (Photo by Sam Adams)

If you were looking for a book about Kentucky, a handmade quilt or a whimsical rooster carved from a tobacco stick, for 48 years there was just one place to find all three, and it was in Whitesburg.

It was, and for the time being still is, a cozy little place in a historic brick building on the corner of Main and Webb. But at the end of this month, The Cozy Corner will close its doors and people from New York or Los Angeles or other farflung cities will have to find another source for uniquely Appalachian gifts.

The century-old bank building where the bookstore and Appalachian arts store has been located since December 1, 1973, has been sold, and store owner Josephine Richardson said she doesn’t plan on staying open.

Richardson, a native of New Haven, Connecticut, moved to Whitesburg in 1969 with her husband Bill. He was recommended strongly by Tom and Pat Gish of The Mountain Eagle to open the Appalachian Film Workshop here, and the Richardsons rented the back and side rooms of the building as the first home for the workshop, now known as Appalshop.

The Gishes housed the young newlyweds, said Richardson, and became like members of their own family.

“I don’t know what I’m going to do at this point. I’ve been in this building for 52 years,” she said sadly.

Richardson said they had always lived in places where there were bookstores, so she left her job as a social worker with Home Health and opened one. When a social work teacher at what was then Clinch Valley College closed her bookstore, she thought of Josephine.

“She offered through some of our friends, who were her students, to give them (the books) to us on consignment,” she said.

The collection was heavy on academic tomes on health care and Appalachian history, but people wanted them. And from her job in social work, Richardson knew there were talented people just looking for an outlet.

“I had met all of these people who were making wonderful things – quilts and baskets …” she said, trailing off.

Author Gurney Norman, who grew up in Perry County, went to school at Stuart Robinson at Blackey, and worked at a newspaper in Hazard, thought it was a grand idea, so he call his friend Stewart Brand, who had just published Norman’s serialized novel “Divine Right’s Trip” in The Whole Earth Catalog. Brand had also founded The Point Foundation and gave Richardson a $500 grant to start the business. Then David Hawpe, who died this week, wrote the very first story about the new bookstore in The Courier-Journal, and word began to spread across the country.

Lucas, she said, had worked as a welder in Indiana, and drew pictures on anything he could find – paper, cardboard, wood. She said she gave him a roll of canvas, and took Kentucky First Lady Phyllis George Brown and members of the Kentucky Art and Craft Foundation to his home.

“He was pulling paintings out from under the bed and the couch, and they were arguing over which one of them would get to buy those paintings,” she said.

Richardson said that while Kentucky is very different from her birthplace, there are many similarities, too.

“I grew up in an Italian, Catholic community, and my first friends were my cousins. The three things that were the most important to us were family, church, and food,” she said. “I think that was also about what was most important to people here.”

In 1985 she partnered with longtime friend Laura Schuster and the two opened the Courthouse Café in two rooms of the same building, and served food prepared from fresh, local ingredients, but with daily specials unlike any other restaurants. They ran it for 29 years with an open door into the Cozy Corner. Patrons could have a lunch of hot turkey salad, authentic fettucine Alfredo, mahi-mahi, or moussaka in the café, and pick up a hand-woven basket for a gift in The Cozy Corner. The restaurant closed in 2014.

Many children grew up with the store, and many of those have left the mountains for jobs in other states and cities. One mother bought an entire set of The Hardy Boys mystery novels for her young son, who grew up to become a reporter for The Washington Post. Her own children also grew up in the store, and two of her grandchildren have been keeping her company in the store and at home for the past few weeks. Richardson’s eldest daughter, Justine, is director of the Guelph University Arboretum in Canada. Her son Jared is executive chef for Team Modern Distribution in Somerset. Anna is vice president for communications of The Michael’s Companies.

The Cozy Corner is surrounded by the work of Bill Richardson, who still operates his architecture firm in Whitesburg and designed the courthouse, and both banks that can be seen from the front windows of the store.

Richardson mused about setting a bench on the corner and sitting there after the store closes, because she said she will miss seeing the daily comings and goings. People come to town down West Main, past The Cozy Corner, and leave in the back of hearse from the funeral homes nearby. Richardson choked up at the thought of watching those somber processions.

“You watch the funerals across the street, especially when the veterans are there,” she recalled, wiping her eyes.

“It’s just the life and movement of a small town.”