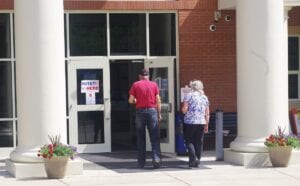 This man and woman had no problem voting in person Tuesday at Letcher County Central High School, which was the polling place for all county voters who didn’t cast a ballot in advance. (Photo by Sam Adams)

Letcher County election totals won’t be known until June 30 because of mail-in voting, but machine totals at the one polling place open on Tuesday, as expected, showed more Republicans than Democrats chose to cast their ballot in person.

The winners yesterday could be the losers by June 30, when the totals of early voting and absentee ballots will be announced. The State Board of Elections is encouraging county clerks not to release partial returns until then, since absentee voters could still mail ballots in through Election Day. Vote counting of the absentee ballots will not begin until after June 27.

Interest in the Democratic U.S. Senate race that has spiked in the past month led to a higher vote total in that race than in the presidential contest. A total of 252 Democrats cast ballots in the Senate race on Tuesday.

Booker received 124 votes on Tuesday to McGrath’s 84. The remaining eight candidates received a combined total of 44 votes, with none reaching double digits.