Whitesburg City Police have arrested a Cowan couple in connection with the theft of a portable storage unit that contained beauty shop supplies belonging to a Whitesburg cosmetology school.

Charlie Monroe Sturgill, 35, and Nadine Sturgill, 40, both of 750 Bartesta Branch, were charged with receiving stolen property after they were taken into custody Wednesday night.

Police found two hydraulic salon chairs and a bag of hair rollers belonging to Jenny Lea Academy School of Cosmetology on the Sturgills’ porch around 10:30 p.m. on April 6. Hairdryers, hair straightening devices and curling irons were found inside the residence located at Big Cowan, a citation says.

The plastic storage building and many burnt papers were found about 100 yards from the home. Whitesburg Police Chief Tyrone Fields said no files containing student information were stored in the building. Fields said all other types of documents located in the storage unit were destroyed by the Sturgills.

“All of the paper trail had been destroyed,” said Fields.

Police were led to the Sturgills after Kentucky State Police Trooper Michael Burton linked them to a license plate number on a silver or gray four-door Ford Explorer Sport Trac pickup seen in a photograph taken by police Sunday night. The photo was taken after a Kentucky State Police trooper drove up on a large plastic container sitting on Highway 15, near the intersection of Business KY 15 and the Whitesburg Bypass at Rite Aid, around 11 p.m. on Sunday.

Whitesburg police and firefighters were among those who responded to a call about the storage building blocking the intersection. Fields said police had no reason to believe the container was stolen at the time because the men who were hauling it did not act suspicious.

An employee with Jenny Lea Academy noticed the storage unit was missing from behind the school Tuesday and reported it stolen to police. The academy does not open on Mondays. 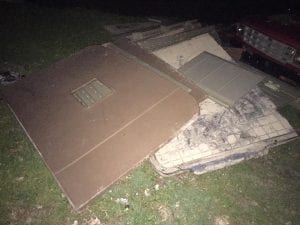 Pictured is part of a portable storage container found in Big Cowan Wednesday.

When police located the truck Wednesday night, the truck has markings on it that were left from transporting the storage unit, the arrest citation says.

A Master lock found on the storage unit recovered at the Sturgill home was identified by employees at Jenny Lea Academy, Fields said.

More charges are expected to be filed in the case. 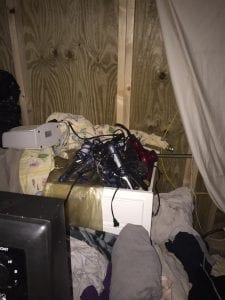 Curling irons and hair straightenenrs were found Wednesday night at the Big Cowan residence of Charles and Nadine Sturgill.