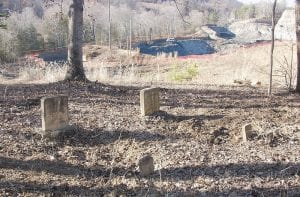 Two graves have already been moved from the Newman Cemetery located near the Caudill-Hall Cemetery near Civil War Gap at Carcassonne, 3-1/2 miles from Blackey. Both cemeteries are bordered by an active surface mine operated by James River Coal. (Eagle photo)

A Letcher County couple is calling on the county’s governing body to help them stop the proposed move of a cemetery at Carcassonne to Green Acres Cemetery at Ermine, more than 22 miles away.

Michael Caudill, who appeared with his wife Marcia at Monday night’s meeting of the Letcher Fiscal Court, said he learned of a proposal to relocate the Caudill-Hall Cemetery after seeing a public notice in The Mountain Eagle. Caudill said he and his wife have long planned to be buried in the hilltop cemetery that is located near his property at Civil War Gap and holds the remains of several of his relatives.

“Put an end to this foolishness,” Caudill told the court. “Nobody wants to think about their relatives being moved. Burial is a sacred contract.”

A public notice of intent to move the cemetery was first placed in The Eagle in mid-December by Everidge Funeral Home of Whitesburg. The funeral home also owns Green Acres Cemetery. A spokesman for the funeral home, Larry Everidge, said the notice was placed at the request of real estate broker Edgar Whitaker, who was acting on behalf of a coal company that is mining in the area.

Everidge said the notice has done what it is supposed to do — get the word out about the proposed relocation to see if anyone objects.

“They’re doing what they’re supposed to do,” Everidge said of the Caudills. “I’ve been in the funeral business since the 1980s and this is the first time anyone has protested.”

The cemetery, located about 3-1/2 road miles from Blackey in one of the most picturesque areas of the county, holds the remains of at least nine people, the first of which, Mando C. Hall, was buried there in October 1912. The home Michael and Marcia Caudill is built around a Civil War-era cabin built by John Hall, who was buried in the cemetery in 1942.

The Caudills have been sole caretakers of the cemetery since 1974, when Mr. Caudill’s aunt, Viola C. Hall, was buried there. Mr. Caudill helped dig her grave as well as the grave of his uncle, Floyd Caudill, in 1980 and Floyd’s daughter, Ashia Marie Hall Holbrook, in 1993. Ashia Holbrook gave the Caudills permission to be buried in the cemetery.

Caudill said he knows of more than 52 living relatives of people buried in the cemetery. He asked the court to protect the cemetery and added that the advertisement placed in the newspaper used the incorrect statute required to move a cemetery.

Caudill said two graves in the smaller Newman Cemetery, which overlooks a large surface mine operated by James River Coal, have already been exhumed and moved to Whitesburg. He said that even though the relatives of the people buried in the smaller cemetery gave permission for the two graves to be moved, it is important the fiscal court take action now to save the Caudill-Hall Cemetery.

In an interview on the afternoon before Monday’s court meeting, the Caudills pointed out that they have had a good relationship with the coal company and the miners who work in the area.

“The mining company has not been difficult with us,” said Mr. Caudill. “We don’t have any bad relations at all.”

“The bottom line is we don’t want the cemetery to be moved,” said Mrs. Caudill. “It’s a stress.”

The court has directed Letcher County Attorney Jamie Hatton to look into the matter. The Caudills said Hatton told them recently that he believes the matter is a property dispute that will have to be settled in Letcher Circuit Court.

“We’re not attorneys,” Mrs. Caudill said. “Do we have to spend a lot of money to not move a cemetery?”

In other business at the fiscal court’s January meeting, Whitesburg Physician Van Breeding praised the court for having the foresight to build the Letcher County Recreation Center, saying it had saved the lives of a number of young people simply by giving them an alternative that keeps them away from risky behavior and promotes a healthy lifestyle.

Breeding told the court the center is the envy of other counties in the region and draws visitors from Virginia as well as nearby counties to use the facility. He added that it has helped some of his patients lower their blood sugar and blood pressure, and others to avoid weight-loss surgery.

Breeding said the presence of the recreation center is a valuable tool for Mountain Comprehensive Health Corporation in recruiting physicians, not only because it provides a first class exercise facility, but because it shows that Letcher County is on the right track.

Breeding said the recreation center, the expansion of water lines, the Main Street Project in Whitesburg, and other improvements throughout the county have worked to show doctors he has recruited to MCHC that Letcher County is moving forward even in tough times.

District One Magistrate Bobby Howard said that when officials from the Federal Bureau of Prisons visited Letcher County to determine if a 300-employee federal prison would locate here, the recreation center was one of the things they cited as a factor in their decision to build a prison in the county.

District One Magistrate Wayne Fleming agreed with Breeding that the recreation center is a wonderful facility and an asset to the county, but told Breeding that the court also has the responsibility of spending the county’s money wisely. Fleming said figures presented at the December meeting showed a $60,000-plus profit for the year, but added the county judge/executive’s office had not included the $600,000 that is in the county budget to service the debt on the center. Fleming said the $600,000 will be an annual expenditure for a long time and pointed out that the coal severance funds that pay for it have dropped and are unlikely to come back for quite a while, if ever.

A number of other county projects are also funded totally or in part by coal severance tax receipts, including water line extensions, fire departments, and the Little Shepherd Amphitheater.

County Treasurer Phillip Hampton also reported that the center made a profit of $8,141 in December. Profits from the recreation center go into the Local Government Economic Assistance (LGEA) Fund, which funds senior citizens centers and other county agencies.

“We need to call an ace an ace,” said Fleming. “We will pay for the building. We have no other option.”

Fleming’s statement refers to a clause in the loan agreement with the Kentucky Association of Counties, the group that financed the center. The clause calls for the county to raise a tax specifically to service the debt if the court is unable to meet the county’s obligation with existing funds. The clause is standard in agreements with quasi-government agencies such as KACO and the Kentucky League of Cities. It is also included in state and federal agreements such as the one with the United States Department of Agriculture Rural Development Agency that financed the Letcher County Courthouse reconstruction.

Fleming told the court that Letcher County Recreation Director Derek Barto does a good job running the center, and said last year’s profit was the result of Barto’s hard work. Fleming added that he has always opposed the recreation center because of the expense and said he felt it would have been better to build a smaller project that would generate more revenue such as a water park.

Fleming called the center a “mistake we couldn’t afford” and said he doesn’t see how Letcher County can stand the debt service payments. Later in the meeting, Fleming asked that financial statements from both the recreation center and the Letcher County Sanitation Department reflect total expenditures and losses, including loan payments. The court voted unanimously to allow the change.

In other business, Judge/Executive Jim Ward told a group of Mill Creek residents that the Mill Creek water line extension project is no longer in the hands of the fiscal court. Ward said money is in place for the project, bids have been taken, and a pre-construction meeting is scheduled for the next two weeks.

“We did all we could do,” said Ward. “It’s a Letcher County Water and Sewer District project now. If you have any problems go to them.”

The Mill Creek residents, Chris Yonts, Elaine Tanner, and Jimmy Hall, were not included on the list of speakers to address the court Monday night. After the meeting, Yonts said the three had signed up to speak and added that he felt he had been denied his right to speak.

County Attorney Hatton told The Eagle that while the law stipulates that meetings must be held publicly, there is no such requirement that individuals be allowed to speak. Kentucky Open Meetings and Open Records laws make no provisions for allowing the public to speak at meetings covered by either act.

The court also discussed ongoing problems with radios and pagers for county employees and first responders including fire departments, EMTs, and police officers. Cary Johnson of Tri-State Electronics in Baxter, who works with county agencies on radio issues, told the court that the problem lies with the coverage area that is limited by the mountain terrain. He said the county would need at least one additional transmission site and that if it is possible, it should look to locate it on an existing tower to limit costs.

• Magistrate Fleming asked the court to extend its thanks to Greg Banks and TGM Coal of McPeaks Branch in Jenkins for their generosity during the holiday season. Fleming said TGM Coal made it possible for several unemployed miners and older people in the area to enjoy Christmas.

• County Court Clerk Winston Meade presented the court with a check for $30,000 as partial payment on the 2012 settlement of excess fees collected. Meade said a second check of $2,891.50 will be presented when the fees are finalized.

• Letcher County Sheriff’s Deputy LaShawna Frazier presented the court with a check for $20,000 to repay an operating advance made to the Sheriff ’s Department in October. However, Frazier said all tax receipts are not in and asked the court for another advance of the same amount, which she said would be repaid by April at the latest. The court voted unanimously to approve the request.

• The court approved two reso- lutions involving funding for water projects in the Carcassonne area. The court unanimously approved hiring the Kentucky River Area Development District (KRADD) to administrate a grant for Phase I of the Bull Creek/Elk Creek/Carcassonne Water Improvement Project and also voted unanimously to amend the budget to accept $500,000 from the Kentucky Infrastructure Authority for the Bull Creek/Elk Creek/Carcassonne project.

• The court authorized payment to Cumberland Pipeline to finalize the company’s work on the Red Star/Ulva Water Improvement Project. Payment is contingent on the Kentucky Department of Transportation’s approval of clean-up work done by the pipeline company.

Bank Balances for county agencies as of January 14: