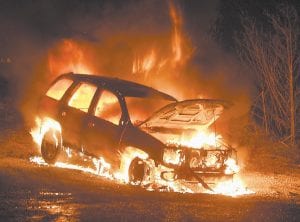 This 2008 Chevrolet Trailblazer was destroyed by fire next to the Thornton Community Park Tuesday night. Larry Baker said he was driving to Whitesburg from his home at Stinking Branch when he started to smell gasoline and saw smoke coming from the hood of the vehicle. He said flames exploded when he opened the hood to see what was going on. The Mayking Fire Dept. arrived at the scene about 8:15 p.m. and extinquished the fire. Baker said the SUV, which he shared with his wife, had just been in a body shop for repairs. (Photo by Ben Gish)