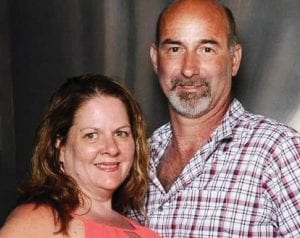 Amy and Donnie Sexton believe they contracted COVID-19 on March 13, when he was in Lexington for a cancer treatment.

Donnie and Amy Sexton, of Eolia, know firsthand what medical specialists mean when they say statistics on COVID-19 are like looking at distant galaxies through a telescope. What you see happened two weeks before.

The two were in Lexington on March 13 for the last of his cancer treatments at Baptist Health, and had been nowhere unusual, they said, since then.

Then on March 27, their daughter Kirstin, who lives in Lexington, tested positive for the virus.

On April 3, Donnie became the first person in Letcher County to test positive for the illness. While he is now fully recovered, he said the virus, which has killed 104 Kentuckians and more than 23,649 in the United States, is nothing to scoff at. Both he and his wife have been quarantined because of it, and their 20-year-old daughter has as well.

“Much worse than the flu,” Amy Sexton added.

The health department made the announcement that there was a positive case in Letcher County on the day Donnie’s test results came back, and the county was added to the growing list of Kentucky counties where the virus has been confirmed several days later.

Amy Sexton has the same symptoms and is presumed to have COVID-19 as well, but she has not been tested and is not counted in the statistics because of that. She said the two of them went to the doctor together, and while the nurse used two nasal swabs on her husband, whose symptoms were stronger at the time, she only used one swab on her. When his test came back positive, she was assumed to have COVID 19 as well. While they expected him to get much worse because of his cancer, a hip replacement and other health problems, hers actually turned out worse.

When they spoke to The Mountain Eagle by phone last week, Donnie said he felt “very good now compared to how I did feel,” Amy was still hoarse and tired, and was afraid she might have to quarantine a little past the April 13 date they were originally allowed to go out again.

Amy Sexton said she thinks the two have had the illness since at least March 29, because that’s when symptoms started. Medical experts say the virus can be picked up several days before the test — which involves sticking nasal swabs into the nose and rubbing them against the back of the sinuses — shows that a person is positive for the virus.

“It’s terrible,” Amy said of the test. “It’s extremely uncomfortable and painful, made my head ache, and me and my husband were already having headaches,” she said.

“It’s been manageable, I’ve just had to take deep breaths to be able to get any air,” she said.

But while she said it has been manageable, that doesn’t mean people should disregard the warnings about it.

“It’s frightening and it’s painful, and everyone in the county should be following Governor Beshear’s guidelines to socially distance,” she said.

So far, the Sextons are the only family to be positively diagnosed with COVID-19 in the county, according to the Kentucky River District Health Department.

That agency said in a news release on Monday afternoon that there have been no additional lab-confirmed cases here. As of 11 a.m. that day, the district department had a total of 9 confirmed cases.