Couple shoot, kill man who had been staying in house 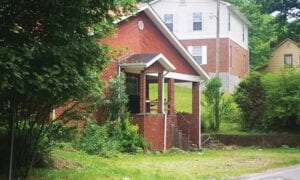 THIS USUALLY VACANT HOUSE at Jenkins, above left, is where a man was shot and killed Monday morning after he entered it about 2:30 a.m. and found the owners were there. Police say the man had apparently been “hanging out” and staying in the house while it was empty. (Photo by Sam Adams)

A Jenkins couple shot and killed a man after he entered a house they owned early Monday morning, police said

Kentucky State Police are investigating the incident and M. Trooper Jody Sims of KSP Post 13 in Hazard said the case will be presented to a Letcher County Grand Jury when the investigation is complete. The grand jury will determine whether the shooting was justified, or if charges should be filed.

James Russell Duncan, 39, died at the scene of the shooting on KY 805 in Jenkins.

According to Kentucky State Police, about 2:38 a.m. Duncan entered a house owned by Justin Thomas Robinson, 27, and Kimberly D. Robinson.

Authorities said the Robinsons had not been living in the house, but had come there to cut grass the day before and discovered that someone had been staying there. They called 9-1-1 early Sunday evening to report a burglary, and Jenkins Police opened a case for burglary.

The Robinsons stayed in the house that night, confronted Duncan when he came in and shot him. Sources said multiple shots were fired during the incident, but it was not known how many times Duncan was hit. He was apparently not armed, officials said.

Several police officers said they knew Duncan as a drug user and petty criminal who had been chased away from a store in Jenkins on Sunday afternoon for panhandling. Court records show his last arrest in Letcher County was in 2017 for public intoxication and criminal mischief. Prior to that, he had been charged with misdemeanor theft, operating a motor vehicle on a suspended license and various traffic offenses.

Duncan was pronounced dead at the scene by the Letcher County Coroner’s office. His body has been sent to the Kentucky State Medical Examiner’s office for autopsy.