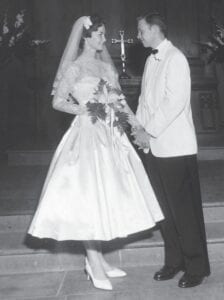 Jackie and Frank Gentry celebrated their 60th wedding anniversary on June 4. They were married in the Danforth Chapel at Berea College.

The wedding was officiated by Dr. George Noss. The attendants were Gwendolyn Fields, sister of the bride, and Howard Whitaker, friend of the groom.

After a short honeymoon to Cumberland Falls State Park, the couple flew to the state of Washington and spent the summer in the Olympic National Park.

The next stop for the young couple was to Florida where they lived and worked for the Educational system in teaching and administration for 30 years. Their graduate work was completed at the University of Florida.