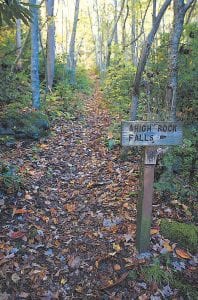 Beauty near Bad Branch This photograph taken near the entrance of Bad Branch Falls near Oven Fork serves as a reminder that when it comes to the beauty of fall, there is no place any more beautiful than Letcher County. (Photo by Thomas Biggs)

The Letcher County Fiscal Court voted to take no action to reduce programs in response to suggested cuts in the county budget at a special called meeting Thursday morning. The magistrates did take at least one step to cut the fat in their own reimbursements by terminating repayment of mileage expenses for in-county travel. The decisions came as the result of discussions on cost-cutting recommendations made by the court’s budget committee, which were set aside in an a five-to-zero vote, with one abstention by Judge/ Executive Jim Ward.

In abstaining, Ward said that he has seen the figures and that some county departments may be in the hole within a month. Ward said that although he doesn’t want to see anything closed, some cuts will have to be made, but he added that he would be glad to look at other ideas.

Following an impassioned plea from Fifth District Magistrate Wayne Fleming to avoid cuts to the Senior Citizens Program, Third District Magistrate Woody Holbrook told Fleming he wanted to yield his seat on the budget committee to him. Holbrook explained that he is in his first term as a magistrate while Fleming has 16-1/2 years experience. Fleming told Holbrook that he didn’t blame him personally for the proposed cuts and Holbrook replied that he didn’t blame Fleming either, and then asked Fleming if he would like to make a motion not to follow any of the committee’s recommendations, adding that he would second it.

After hearing comments from audience members and discussing the need for magistrates to get a complete and detailed report on the county’s finances, the court voted. Judge Ward repeated that he abstained because he understands the urgency of addressing the issue, but the remainder of the court members voted to wait until they were able to have more information on payroll and other financial issues before making cuts in any particular program. The vote was to take no action on any of the budget committee’s recommendations. Ward and Fleming both said that the recommendations could be revisited but that no action will be taken on them immediately.

Ward opened the meeting by giving an overview of the county’s financial situation and said that, judging from the first two quarters of coal severance tax receipts, it looks like the county will get about $1.5 million this year, about $900,000 less than last year, and that coal severance receipts are down about $2.5 million over the last two years. He said all the magistrates had been given statements with the figures and deficits, and that while other counties had been forced to make severe cuts a few years ago, Letcher County had been able to keep from taking draconian measures. However as income has continued to decline, Ward said it is time to cut back. He emphasized that nothing has been done yet, but reminded the court that according to Kentucky law, it has to have a balanced budget.

“I’ve always told it like it is,” said Ward. “But the numbers are right here. We can’t just keep kicking the can down the road.”

Magistrate Wayne Fleming said the court still doesn’t know what kind of allocation it will get when the General Assembly meets in Frankfort in January, and added that Senior Citizens had a carryover of about $300,000 last year. He said that the county’s budget had been sound enough that it was approved by the state in July and asked how it had gotten to this point in such a short time.

“We’re down from lack of coal severance money and we are going to suffer,” said Fleming. “But we are suffering from bad management too. Bad management started five years ago. How do we go from a budget that was approved by the state to being broke?”

Fleming said he doesn’t see any reason the Senior Citizens Program should be shut down without discussing ways to cut the fat from every other area of the county budget. He pointed to the size of the county vehicle fleet. Fleming mentioned the $600,000 annual loan service payment for the rec center and said that while he understands it has to be paid, he wishes the entire cost of the center was included in budget figures because it is disingenuous to show a $32,000 profit for the center while there is a $600,000 loan service per year.

“Do you want to shut the rec center down?” asked Ward.

“I’d rather do that than shut the Senior Citizens down,” replied Fleming.

“We’re not going to shut the Senior Citizens down,” said Ward.

Although most of the packed house in the circuit courtroom was made up of older citizens, most of the audience comments were made in favor of preserving the county’s recycling center, with only a few comments on the Senior Citizens Program. However, Fleming’s comments in favor of keeping the centers open were greeted with enthusiastic applause.

“We don’t want to be shuttered,” said Henrikson, saying his biggest concern was that the historic Carcassonne Center might be sold. “We want to keep our community center open, but we don’t need a single dime from you.” Ward assured him that nothing would be sold.

Henrikson indicated that he would not object to an increase in sanitation rates, but he certainly does not want to see the recycling center and mandatory countywide garbage pick-up discontinued. He said that Wayne Fleming was the court member he holds in the highest regard and that it would be unwise for the court members to make a hasty decision they would later regret. He added that he is all for the county recreation center.

Retired attorney Peyton Reynolds spoke about the county recycling center and said that he feels it would be a bad idea to do away with it. Reynolds said that when he travels he often tells people he meets about the way the Letcher County blue bag program operates and said he and his wife use the blue bag system regularly.

Reynolds pointed to the cleanliness of the streams and rivers in the county and said it would probably have an impact on water quality if the recycling center is closed. He also asked the court if there is some way to get more people to recycle. Judge Ward told Reynolds that the recycling center sold recyclables for about $20,000 last year and Reynolds said he would not object to a raise in sanitation bills either.

Henrikson took the floor again and said that the real cost savings measure the recycling center provides is the amount of waste it keeps from going to the landfill. At the April 2014 meeting, Ward told the court the current rate for tipping fees (the price per ton to have waste hauled to the landfill) is $44.60 per ton. Henrikson added that tipping fees have continued to go up in recent years.

Fleming told the court that he didn’t mean to imply any criticism of the budget committee, but said that he believes that no one knows all the facts they need to know about the county’s finances. He said the court needs to know the actual number of people on the county payroll and it needs to sit down in a work session to arrive at a solution. He added that closing the county recreation center is not a viable option because, according to the terms of the loan agreement, if the court cannot make the payments it will have to pass a countywide tax increase to accommodate the debt. This is a standard clause in municipal loans agreements since the county’s property and infrastructure cannot be repossessed like a car or house.

Fleming also said the court members had discussed raising sanitation rates and had actually voted to raise them in 2014, but then they were told it wouldn’t be necessary so the increase didn’t go into effect. He said that in the matter of sanitation fees, the best thing would be to tie increases in the garbage collection fee to the cost of living so fees would gradually increase every year when there is a positive increase in cost of living, without having the impact larger increases have when they are initiated. Magistrate Holbrook added that an increase of $8 per month would alleviate the sanitation and recycling deficit.

Fleming also brought up the issue of mileage reimbursements for magistrates and said he hasn’t taken a mileage check for a year and half. He said that most of the magistrates do the same, but added that Fourth District Magistrate Keith Adams takes his expenses and in essence, gets an extra check from the county by doing so. Adams replied, “Absolutely, I don’t sit at home. I’m on the move.” Adams later said that no longer wishes to be on the budget committee. Jon Henrikson told the court he feels that all the members of the court need to serve on the budget committee.

Debbie Bradley of Thornton asked Ward how much Channel 98, the county’s government TV channel, costs and Ward replied that it’s about $66,000 a year. Bradley replied that she thinks it is an unnecessary luxury, and an expense the county doesn’t have to pay. Whitesburg businessman Jim Craft suggested a county sales tax of one half of one percent as a way to increase revenue. Craft said this is a way for everyone to contribute a small amount to help the county.

As the meeting was coming to a close, Second District Magistrate Terry Adams made a motion to do away with the mileage reimbursements for the magistrates’ in-county travel. The vote to approve his motion was five to one, with Keith Adams voting no.