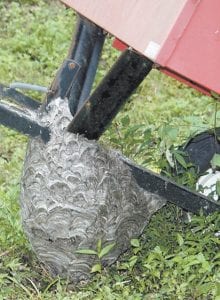 Weather folklore says that if hornets build their nests close to the ground a harsh winter is coming. If this photo showing a hornets’ nest built between the ground and the tongue of a cart holds true to the folklore, then Letcher County is in for a tough winter. (Photo by Freddy Oakes)

As the new recreational vehicle parking spots at Fishpond Lake Park are getting close to being completed, the Letcher County Fiscal Court has modified the rules at the park to include the RVs and to increase safety for park users.

Parks and Recreation Committee Member James D. Collins presented a list of proposed rules to the fiscal court at its August meeting and some ideas were offered to modify them.

Check-in time is between the hours of 9 a.m. and 3 p.m. and check- out time was extended to noon from the proposed time of 10 a.m. to give campers time to clean up their campsites. The charge for an RV site with electricity, water, and a sewage dump is $25 per night, and the maximum stay is limited to 14 consecutive days within any 30-day period. Quiet hours will be in effect between 10 p.m. and 6 a.m. daily and excessive noise in that time period is prohibited. Gates will be locked at 10 p.m., but provisions will be made so campers can leave the park in the event of an emergency. Campers will be restricted to designated camping and RV sites and no RVs or tents will be allowed to set up under shelters or plug into electrical outlets at shelters or restrooms.

Parents will be held responsible for the behavior of their children and are urged to supervise them accordingly. The discharge of gray water or other waste material or liquid from campers is prohibited, as is washing vehicles, RVs, ATVs or other equipment. Alcoholic beverages are prohibited by local laws and all loaded firearms, ammunition, other weapons, and explosives, including fireworks are prohibited. Fires are permitted only in the fire rings that are provided by the park at campsites and fires must be contained in the fire ring, Campers are responsible for cleaning up their camp site and trash must go in designated Dumpsters. Sites will be inspected upon check out. Pets must be on leashes. The court voted unanimously to approve the rules.

In other business, Deane resident Willie Farley approached the court to add his objections to aerial spraying along gas- line rights of way.

Farley, who is a Vietnam veteran, told the court that the compound used in the spraying contains some of the same chemicals as Agent Orange, a defoliant widely used during the Vietnam War, which he said had done untold damage to those who were exposed to it. He said that leaves killed by the spray can blow into people’s yards and harm individuals as well as pets.

County Attorney Jamie Hatton told Farley that he has done an extensive search of legal regulations that might allow the court to regulate spraying, but the state is responsible for regulating the activity and the county doesn’t have any legal options. Hatton also said that the state follows the guidelines set out by the federal Environmental Protection Agency for agricultural spraying.

Judge/ Executive Jim Ward announced that a “ half marathon,” a 13.1- mile race, will be held on the Little Shepherd Trail on August 23 at 8 a.m. The race is sponsored by the Pine Mountain Trail Conference.

Letcher County Tourism Commission Chairman David Narramore announced the schedule for county festivals, with Jenkins Homecoming Days kicking the festival season off, August 21 to 23. Isom Days will be held Labor Day weekend, August 28-September 1, and Neon Days will be held September 12 and 13. The Mountain Heritage Festival will be held from September 22 through 27 with the parade taking place on September 27.

Mark Saunier of Comfort & Process Solutions (CPS) reported back on a preliminary energy audit on county-owned buildings and told the court that substantial savings can be realized by upgrading to more energy efficient equipment. Mark Zoller, a mechanical engineer who works for CPS, told the court it can save at least $20,000 a year and maybe a good deal more depending on how extensive it is willing to make the upgrades. Zoller explained that the savings will pay for the debt service to do the work and Saunier said that CPS will be contractually obligated to pay the difference if the savings from the upgrades do not match the annual debt payments.

The court members voted to allow CPS to proceed with issuing a Request for Proposals after Saunier assured them that there will be no financial obligation on their part until they actually enter into a contract and secure a bond issue. Fifth District Magistrate Wayne Fleming expressed doubts that the arrangement will work as it is presented, but said that as long as there is no financial obligation or signed contract, he is willing to allow the process to go forward. Zoller told the courts that several Kentucky counties are already participating in the energy savings program, including Pike County and Bourbon County.

Retired teacher Bill Lewis announced that he will seek funding as a non-profit corporation for an energy initiative to promote the use of clean coal as well as renewable energy sources such as wind and solar energy to create electrical power to sell. Lewis said that his efforts should create jobs and hopes it will revitalize the coal industry in Letcher County. He asked the court for $5,000 for start-up costs but Judge Ward told him that until he has the 501-C3 tax status granted to nonprofits, the court will not be able to grant him any funding.

In other business addressed by the court:

• The court voted unanimously to approve The Residential Anti-Displacement Relocation Assistance Plan under Section 104 (d) of the Housing and Community Development Act of 1974, as amended for the Craft’s Colly Sanitary Sewer Project. Angie Hatton of the Kentucky River Area Development District told the court that while it is necessary for it to approve the plan to receive funding for the Craft’s Colly Sewer Project, it will have no affect on county residents.

• First District Magistrate Bobby Howard asked that a sign to commemorate the miners killed in the 1976 Scotia mining disaster be placed along the new portion of US 119 when it is complete.

• While the bank balance for the General Fund shows a negative balance of $21,921.19, County Treasurer Philip Hampton explained that the balance was computed on July 31 and that since that date, deposits from Sanitation and other county agencies have raised the balance to just over $50,000.

Bank balances for county agencies as of August 12: