Court officially puts $2 garbage rate hike aside for time being 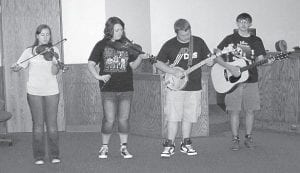 A proposed ordinance to raise garbage rates was placed on hold this week after the Letcher County Sanitation Department’s budget deficit fell to $41,000.

The Letcher Fiscal Court voted in June to raise rates by up to $2 per month, but the ordinance was never presented to the court for a vote. Letcher County Judge/Executive Jim Ward said he now believes it would be better to delay action on the ordinance to raise.

“Let’s play this by ear,” Ward said Monday during the fiscal court’s September meeting. “We haven’t passed it (the rate increase) and it has to be done by ordinance. We’re down to $41,000; let’s see if we can work to lower it further.”

The court’s latest decision comes a month after a motion to rescind the rate hike introduced by District Five Magistrate Wayne Fleming failed in a three-to-three tie. Fleming said he had voted to support the increase originally but worried the current unemployment situation would place too great a burden for Letcher County residents. Ward also said during the August meeting that Letcher County Attorney Jamie Hatton had begun to prosecute sanitation customers who are seriously delinquent in their accounts and had taken 21 to court so far. Ward said that collections had increased from $56,995 in July 2011 to $78,542 in July 2012 and that August 2012 collections as of the 15th stood at $91,485 against total collections of $122,334 in August 2011.

In other business at Monday night’s meeting, the court also voted to accept tax rates for the coming year from other governing bodies in the county that have already submitted them. The Letcher County Health Department has not received approval from state officials on its rate for next year and Jenkins Independent Schools will address the issue at its regular board meeting on September 24. The Letcher County school system has not conducted the necessary hearings for its rate, and Judge Ward said the county will be lucky if tax bills can be mailed by October 15. Several magistrates expressed their displeasure at the delay and Magistrate Fleming said the board’s lack of action would be responsible for shortfalls in several county agencies because of the tax bills going out late.

“This puts a hardship on the sheriff ’s office and the county clerk’s office,” said Fleming. “There’s no excuse. It comes up every year. I’d like to know why they can’t get that done.”

Letcher County Sheriff ’s Deputy LaSahawna Frazier told the court the Sheriff ’s Office budget will be impacted by the late date for sending taxes out and asked the court for a $20,000 advance until tax revenues start coming in. Frazier said the advance will be paid back by December 31. The advance is a regular occurrence as income for the sheriff’s office comes from tax revenue and declines as the year advances. The court voted unanimously to approve the request.

Also at Monday’s meeting, the court discussed the need for more paramedics and emergency medical technicians in Letcher County. Magistrate Fleming said Letcher County ambulance services need paramedics on duty and on ambulance runs as well. Gary Rogers of Letcher Fire and Rescue said that under Kentucky law, an ambulance service must have at least two paramedics so if one accompanies a patient out of the county, the other will be on call. Judge Ward said that unless funding from mineral taxes increases, it will be difficult to staff county ambulance services with paramedics but he said the current allocations for Letcher County fire departments and rescue services should be all right, and funding for a rescue truck for Letcher Fire and Rescue should remain in place as well.

The court voted unanimously to approve construction plans for the Blackey Senior Citizens Center. In response to a question from Magistrate Fleming, Ward said it will probably be necessary to relocate the Fleming-Neon Center while a new center is constructed. Ward said it comes at a bad time since the Jenkins Senior Citizens Center will also be relocated while the old Jenkins High School is renovated for senior apartments.

Magistrate Fleming told the court he is concerned about the Kentucky Department of Highway’s decision to no longer absorb the cost of placing signs honoring veterans alongside county highways. Fleming said instead, the highway department wants the families of the veterans or the county to pay for the signs. He said that regardless of what happens, the cost will not be passed on to the families of those who have served their country.

“That’s a charge that will never be passed back to a veteran’s family,” said Fleming. “I can understand the state not wanting to put up a sign for a politician, but it’s a different thing for a veteran.”

Ward said he agrees with Fleming and has already talked with Letcher County’s state representatives and state senator. He said he has been told it costs about $300 for each sign and that does not include other expenses including engineer fees.

The court and audience were entertained by a performance from the Cowan Creek Music School during the meeting. The group, which consisted of Logan Dollarhide on banjo, Autumn Dollarhide and Rebecca Standifer on fiddle and Levi Caudill on guitar, played “Little Liza Jane” and “Old Joe Clark.”

Stacy Dollarhide, who runs the program, told the court that the Cowan Creek Music School, which holds its summer instructional session in June, had 118 students this year from all over the United States. Dollarhide said the school had 14 classes in banjo, fiddle, guitar, and harmony singing and many of the participants came with their parents to make family visits in Letcher County.

• Letcher County Treasurer Phillip Hampton reported that the Letcher County Recreation Center was $9,759.09 in the red in expenses over revenue in August. Center Director Derek Barto said the figure is partly the result of having to make three payrolls in August and said a lot of people who use the facility in colder months are spending more time outdoors. Hampton said the center is still operating at a profit for the entire year, and is $42,710.29 in the black in profit over expenses.

• The court voted unanimously to approve the second reading of an ordinance setting the speed limit at Fishpond Lake at 10 miles per hour.