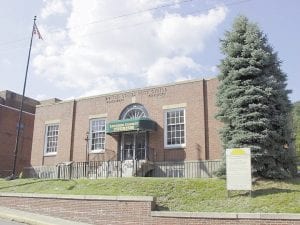 The problem of what to do with yet another pre-World War II building arose at a special called meeting of the Letcher Fiscal Court last week. The building in question is the old Whitesburg Post Office in downtown Whitesburg. The building, which has served as headquarters for the Letcher County Tourism Commission, was acquired with the help of Fifth District Congressman Harold "Hal" Rogers for the purpose of providing a tourism information center for the county.

The Tourism Commission had hoped to staff the building with a tourism aide to provide information to tourists in Letcher County, but soon after the county purchased the site from the U.S. Postal Service, funding for that type of project dried up in Kentucky and on the national level, leaving the court with a building that brings in no income and is difficult to maintain. The rent is paid from the Tourism Commission’s appropriation through the hotel and motel tax.

The question arose during the routine approval of the county’s bills when District Five Magistrate Wayne Fleming questioned a maintenance bill of just over $4,000 for the old post office. Fleming asked the other members of the court if the county was getting any benefit out of the building. Judge/Executive Jim Ward said the building is difficult to maintain, but that it has to be kept up or it will begin to deteriorate and become worthless. Several court members expressed a desire to be rid of the building and called it a white elephant. Similar complaints were aired by court members earlier this year concerning the old Jenkins High School, which the county also owns and maintains.

District Two Magistrate Archie Banks said the fact that the building is well built and solid also makes it difficult and expensive to maintain. Ward said the building needs work on the windows now or they may fall out, and that it is important to keep it looking good because of its location and potential value.

The old post office was built as a WPA project during the New Deal in the administration of Franklin Delano Roosevelt.

. The court approved the standing orders and voted unanimously to add a payment for a new backhoe and mower recently purchased from Caterpillar. Judge Ward said the reason for adding the payments was because if they wait until the regularly scheduled meeting of the fiscal court on the third Monday of each month, they will incur a late charge.

. The court voted unanimously to purchase four "minipacker" trucks to pick up and haul garbage. Ward said the trucks were purchased on-line in a "reverse auction" conducted by the Kentucky Association of Counties (KACO). Ward said the method of purchase saved the county $21,000 on the four units.

Ward said the mini-packers will also save the Letcher County Sanitation Department money by cutting down on runs and eliminating eight to 10 positions. The total for all four trucks was $274,000.

Ward said the Sanitation Department had $200,000 in its budget already appropriated for the vehicles and the remainder was financed through KACO. The trucks are model GMC 5500 side loading rear dump trucks which can back up to the main packer and dump garbage.