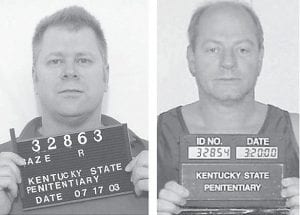 For at least a decade, the Supreme Court has declined to rule on the use of lethal injections and whether the death penalty applies to anyone who rapes a child. In its term ending June 27, the high court issued decisions on both, but neither solves the bitter fight over capital punishment.

Death penalty opponents have instead promised even more litigation claiming lethal injection can cause excruciating pain.

In disparate decisions, the court ruled in April that fatal injection, when done properly, does not violate Eighth Amendment protections against cruel and unusual punishment. On June 25, justices declared killing child rapists does violate it.

And it is the earlier decision, some legal experts say, that will most affect death penalty challenges. Not for what it clarifies, but for what it doesn’t.

This spring’s ruling was based on one Kentucky execution that encountered no problems while officials administered a threedrug injection. Defense attorneys argued the use of that protocol risked causing cruel levels of pain.

But the court established that challengers must prove “substantial risk of serious harm.” Sparse evidence presented by defense attorneys in the Kentucky case did not meet that requirement, justices said.

Yet, say several death penalty experts, that new standard establishes a threshold while simultaneously opening a door to cross it.

Defense attorneys who can document that botched executions have caused serious suffering could gain great inroads for their death row clients, those experts said.

“This presents not just an opportunity, but an obligation to develop arguments with evidence about less-than-perfect protocols,” said Douglas Berman, a law professor and death penalty expert at Ohio State University’s Moritz College of Law. “And those states inclined to tweak their protocols may be setting themselves up for further litigation by people who will say ‘Hey, they changed their protocols so that must mean there’s something wrong with them.'”

Such challenges have already occurred in California, which has the nation’s highest death row population at 669, and Texas, which executes more inmates than any other state.

Besides, said Kent Scheidegger of the Criminal Justice Legal Foundation, execution is a punishment, not a medical procedure.

“We’re dealing with a method that is relatively painless. There’s no reason it should be totally without pain,” he said. “There’s a difference between saying we don’t torture people to death and guaranteeing that death will be painless for a convicted murderer.”

Thirty-five of 36 death penalty states use lethal injection. Legal fights cover myriad battlefronts – from attacking the medical qualifications of those administering the drugs to questions about whether the chemicals used comply with controlled substances laws.

Since the much-anticipated Supreme Court ruling, six states have moved to reinstate executions. There have been nine thus far – two in Georgia, two in South Carolina, two in Virginia and the rest in Mississippi, Oklahoma and Texas. Another execution is scheduled Tuesday in Florida.

On their own, some state courts have already said lethal injection is unconstitutional.

Weeks after the Kentucky ruling, a judge in neighboring Ohio invalidated that state’s three-drug protocol and ordered the use of a single, powerful barbiturate that would put an inmate to sleep – much in the same way that veterinarians put down animals.

In many lethal injection appeals, inmates have supported that method.

Kentucky inmates Ralph Baze and Thomas Bowling Jr., both convicted of double murders, made the same argument. Justices disagreed, saying state standards and procedures had worked because the condemned died within 15 seconds, without incident.

From now on, legal experts contend, most court arguments will turn on that specific issue. “Every defendant will say our state is not like Kentucky. Every pro-death penalty state will say our protocols are just like Kentucky’s,” Berman said.

The high court’s other ruling is more definitive. Justices declared that executing child rapists was disproportionate to the crime committed. Capital punishment applies only to killers, justices said, and to crimes against the state.

Death row lawyers said Kentucky attorneys had been barred from presenting evidence showing death by an intravenous line had caused severe pain in other jurisdictions. All lethal injection states use some kind of tripledose procedure that first delivers an anesthetic to put the inmate to sleep, then a second paralyzing chemical, and a final dose that stops the heart.

It was developed by an Oklahoma coroner in 1977 and has little changed. It was designed to avoid distasteful deaths associated with electric chairs and gas chambers – executions in which some inmates had been set afire and others choked and convulsed from toxic fumes.

Lethal injection was less ob- jectionable, prison officials said, and its paralyzing agent would ease discomfort to those witnessing executions.

But if anesthesia is not administered correctly, or in a high enough dose, inmates remain awake and able to feel pain as the procedure continues, say inmate attorneys. Paralysis prevents the prisoner from speaking or expressing pain while enduring suffocation and, ultimately, cardiac arrest, they say.

Among their examples is a 1989 Texas execution during which inmate Stephen McCoy reacted violently to the toxic chemicals entering his body and began choking and seizing, despite being restrained. A male witness fainted, knocking over another witness. A state official later said a heavier dose might have been warranted.

Justices themselves appeared conflicted on the issue of lethal injection, as well as the death penalty. Despite their 7-2 vote, they issued seven separate written opinions.

Justices Anthony Scalia and Clarence Thomas agreed that the narrowness of the case would only create more death penalty lawsuits. “This never ends,” said Scalia. Justice Samuel Alito disagreed, saying correct interpretation of the court’s standard would not lead to “never-ending litigation.”

For the first time, Justice John Paul Stevens – who voted with the court majority to reinstate executions in 1976 – said he’d changed his mind about capital punishment.

“I am now convinced that this case will generate debate not only about the constitutionality of the three-drug protocol … but also about the justification for the death penalty itself.”