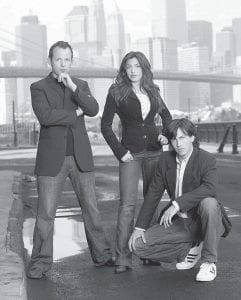 In this photo provided by truTV, the three stars of the new series, “The Real Hustle,” which offers tips to avoid scams from real-live hustlers, from left to right, Apollo Robbins, Dani Marco and Ryan Oakes, pose for a photograph. (AP Photo/truTV)

The network that burst into public consciousness with the O.J. Simpson trial and other bigname courtroom dramas in the 1990s is now part of television history, renamed truTV to emphasize its prime-time action programming.

Besides the name, there won’t be many immediate changes to what Court TV has become. The six remaining hours of legal-oriented material during the day will remain, labeled “In Session.”

That’s about as far from swearing in a witness as you can get, but Court TV’s viewers are used to the disconnect.

Court TV prime-time has emphasized non-fiction series like the long-running “Forensic Files” and newer shows like “The Real Hustle,” which interviews pickpockets about tricks of the trade; the upcoming “Black Gold,” about oil prospectors; and “Speeders,” which shows tapes of people trying to talk their way out of speeding tickets.

That’s part of an intensely competitive television world; “Black Gold” taps into the same fascination with grueling jobs as “Deadliest Catch” on Discovery and “Ice Road Truckers” on The History Channel, for example.

Now the network takes the risk of shedding an established brand for the unknown.

Koonin oversaw the successful brandings of TNT and TBS. Those networks established clear identities – TNT is for drama, TBS does comedy – while keeping names that are essentially meaningless.

TruTV’s identity will be fastmoving programming that tells real stories about real people. There’s such a glut of reality programming with a wide range of styles that truTV is making an explicit point of rejecting the term.

“Reality has a connotation of not being real, of being phony,” said Marc Juris, executive vice president and general manager of truTV. “We felt that because (our programming) was real, we couldn’t call it reality.”

Deciding to change the name wasn’t that difficult, particularly since Turner executives, upon taking over in spring 2006, agreed it was necessary, Juris said.

Networks can be elastic things; the MTV and VH1 of today bear little resemblance to what they were 20 years ago, but they kept their names without much of an identity crisis. The Learning Channel became TLC when it became obvious the name and programming weren’t a match.

That was clearly the case at Court TV, where legal coverage had been restricted to the hours of 9 a.m. to 3 p.m. on daytimes, Juris said. “It’s really a case of the brand catching up with the programming,” he said.

Changing the identity of a network while keeping that specific a name is next to impossible, he said.

“If Red Lobster decided to become a steakhouse primarily, it would be really hard to convince people that Red Lobster means steaks,” he said. “It’s different if it’s a Bennigan’s.”

Finding a name that rings tru, however, is an excruciating process because the consequences of failure can be huge.

Court TV consulted outside experts. It held an in-house contest to suggest ideas. Executives sifted through some 5,000 candidates.

Frank TV was one popular suggestion; Koonin wound up using it for comic Frank Caliendo’s TBS sketch show. Brainstorming for a name that evoked true, not fictional, stories, they realized the name was right in front of them. True Nation was almost chosen, but truTV tested better with focus groups.

Since all the letters in truTV were also in Court TV, it also enabled the network to make a neat graphic to remind viewers of the change.

Even though truTV will retain its daytime legal programming, executives gave that block a new name to avoid confusing viewers, Juris said.