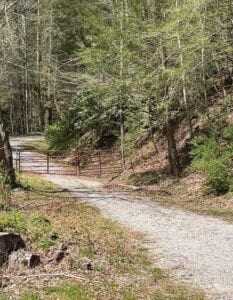 A road leading to a cemetery at Pine Creek, Mayking, is seen in this photo. The Letcher Fiscal Court voted earlier this week to work on such roads, saying that although the cemetery roads were not actually county roads, the people attending funerals are county residents and should be able to get to the cemeteries safely. (Photo by Bobby Maggard)

The Letcher Fiscal Court has voted to use general fund money to gravel and perform work on roads in emergency situations to allow mourners to get to public cemeteries for funerals.

District 2 Magistrate Sherry Sexton brought the matter up and several other magistrates spoke in support of the action, saying that although the cemetery roads were not actually county roads, the people attending the funerals are county residents, and should be able to get to the cemetery safely.

Judge/Executive Terry Adams said he agreed, but the law specifies that state Road Aid money cannot legally be used on non-county roads. Adams said he wants to make sure the county is in compliance with the law, and County Attorney Jamie Hatton added that the county employees working the roads will have to be paid from non-Road Aid funds as well.

Hatton said he will look into the situation to make sure the county is not violating laws and Adams said he believes the court members can figure out the proper process to comply.

Roads weren’t the only infrastructure discussed at the meeting. Whether broadband is just like highways, electrical transmission lines, and water systems, is at the heart of arguments over the federal infrastructure bill proposed by the Biden Administration.

For rural areas, broadband may be one of the most important pieces of infrastructure, and one that has been neglected for years, proponents say. At the April meeting of the fiscal court, Harry Collins, Chairman of the Letcher County Broadband Board, told the court that during the COVID-19 lockdown, Letcher County residents have learned that having effective broadband coverage is as important as having good roads.

Collins said that while many Letcher County residents were working from home through the Internet, their relationship with the web changed.

He added that the new nature of web use has revealed some big problems with connectivity. While many people have adequate download speed through broadband, they lag behind badly on upload speed, that is the ability to send information from their home computers to an Internet destination. Collins said that the Center for Rural Development in Somerset has made a connectivity speed test available at speedtest. ky.gov, that allows anyone to test their own computer connection speed. The results may be surprising.

Collins said Letcher County is lagging behind surrounding counties with 4 percent to 5 percent participation in the speed test while Leslie County has 16 percent. He said the county needs at least a 10 percent participation rate to receive the data from the Center for Rural Development, and “we need that data.” He said that the 10 percent speed test saturation rate will allow Letcher County to get the badly needed valid data to use in convincing funders to help the county serve the needs of the citizens.

The data will be used for a study to determine what needs to be done and how much it will cost. Collins said there are several pots of money available for improving service, but there are still places in Letcher County with no broadband service at all. “We need to look at all of the county to see who is not being served.”

Slow connectivity speed or no connectivity has hampered students whose classmates are being served with virtual classes from their schools, forcing them to use recorded lessons on video or travel to Wi-Fi hotspots, doing homework in the family car in parking lots.

They are not the only ones who are being hurt from lack of connectivity. People in areas with no service or substandard service are not able to participate in telehealth service, which was instituted by a number of area healthcare providers to allow patients to have online video check-ups with their own doctor. He added that a lot of people were forced out of work due to poor connectivity.

In a related matter, the court voted to allow the Broadband Board to investigate the possibility of laying conduit along with waterlines or other buried lines to run fiber optic cable through when it becomes available. Collins said it will save millions of dollars in fees charged to use utility poles to hang cable and in repair costs.

Adams said that working with fiber optic cable is a big possibility for future job creation and the county should connect with Hazard Community College and the Center for Rural Development, both of which are offering classes for fiber optics connection technicians.

Hatton also read resolutions for the court’s approval, including the second reading of an amendment to the Administrative Code to include an inclement weather policy and a resolution to accept Road Aid funds from the Kentucky Transportation Cabinet in the amount of $1,201,790. Both resolutions passed.

The court members voted to open a new checking account for funds from the American Rescue Plan. They also voted to accept the low bid of $310,000 from Elliott Enterprises in Paducah, to replace the cooling tower on the county courthouse. The Administrative Office of the Courts will pay 65 percent of the cost. Adams said he believes the old one will probably fail this summer and create problems with the summer heat.

The court voted to give a waiver to Mark Energy LLC to allow it to operate closer to a county road at Franks Creek than the law specifies, so it can mine coal and provide jobs. The company took over Blackjewel’s operations at Eolia.

The court members also approved the lease of the Oven Fork Senior Citizens building to Ernie Scott, owner of the General Store at Creek Crossing in Partridge. They passed the annual standing order to pay for monthly recurring expenses before they become overdue.

Letcher County Jailer Burt Slone reported that the current inmate count is 126, and said that more inmates who are coming in are in “bad shape.” Slone said he believes the availability of the powerful drug fentanyl, which is estimated to be 25 to 50 times as strong as heroin, is the reason. It is an opioid analgesic used to treat severe pain and has a high risk for addiction.

Bank Balance Recap for County Agencies as of March 31, 2021: