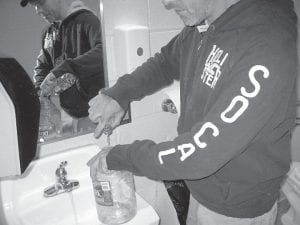 Residents of Shelby Fork and Mill Creek should see construction on long-awaited water lines begin soon. The Letcher County Fiscal Court voted at its October meeting to authorize a Memorandum of Agreement (MOA) with the Kentucky Infrastructure Authority to accept $150,000 from the 2012-2013 state budget and Judge/ Executive Jim Ward said as soon as Kentucky Infrastructure Authority receives the MOA, it will authorize it and bids can be let. Steve Caudill of Bell Engineering told the court he expects bids to go out in the last quarter of 2012, between October and December.

Several residents of Shelby Fork addressed the court to emphasize the dire nature of the water emergency they face. Chris Yonts, one of the Shelby Fork residents who initially came to meetings of the fiscal court and Letcher County Water and Sewer District to point out how bad the water in the area is, told the court the situation is extreme and said he has thought of moving his family out of the Shelby Fork area. Yonts also told the court the roads in Shelby Fork are getting bad and Second District Magistrate Terry Adams said as soon as state paving requirements are compete, asphalt plants will start selling asphalt to counties and the roads in Shelby Fork are on the list to be repaved. 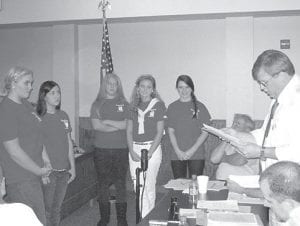 Others from Shelby Fork also spoke to emphasize their plight and Jimmy Hall brought in about a dozen empty water jugs and asked if he could fill them at the courthouse with treated water so he could gave them to Shelby Fork residents. Judge Ward told Hall the MOA was the final action the court would need to take to get things underway with laying water lines. Hall questioned why lines were being laid to nearby areas and Ward and Caudill both explained that the lines in question were funded by a grant from Abandoned Mine Lands (AML), which had declined to fund lines in the Shelby Fork area. Hall also carried a bucket for donations to purchase bottled water for his neighbors. Judge Ward, Magistrate Terry Adams and Caudill all said the request for funds for the Shelby Fork line extension had been made early in 2012 for the General Assembly session and that the funding process had to move through state funding and permitting agencies.

Caudill also gave the court a complete overview of progress made in laying water lines in Letcher County and said he expects over 1 million linear feet of line to be in the ground by sometime in 2013. Currently, the water and sewer district has 870,500 linear feet in the ground from 26 ongoing or completed water projects. Of those, Caudill said 24 were funded 100 percent by grants with no debt incurred by the county.

Caudill said Phase II in Premium, to extend lines to KY 588, will be bid in the last quarter of 2012 and work will begin in the Bull Creek/Elk Creek area by using funds reallocated from the Blackey Sewer Plant until the remainder of the funding from AML comes in around the third quarter of 2013. Phase II of the Deane Project is nearing the construction phase and Caudill said Bell Engineering is working to finalize the sites for a tank and pump station. Phase II of the Pert Creek/Cram Creek/ Pine Creek project will be bid later this year and some funding is available for line extensions in Millstone as well.

In response to a question from Fifth District Magistrate Wayne Fleming, Caudill said AML has funded between $6 million and $10 million in water line extension projects and Judge Ward said he would guess it is slightly more than $10 million. Ward said in the last two years Letcher County has received over half of AML’s overall budget for Kentucky and Caudill said the county received nearly half AML’s Kentucky budget for 2012 as well. Ward said it has taken a lot of travel to AML offices in Frankfort to make the case for funding Letcher County and credited Caudill and Bell Engineering with keeping the court informed about any extra money AML might have from projects that were completed under bid or bids that came in under the allotted amount. He said some projects in the county have been finished or totally accomplished with a few hundred thousand dollars left over from other projects that had been returned to AML.

Fleming asked about a line connecting City of Jenkins water lines with lines owned by Fleming- Neon near Haymond, saying the water supply for Neon is always uncertain. Caudill said the project is under consideration by AML and Water District Superintendent Mark Lewis added that the district has $350,000 in coal severance funding for line extensions into Loggy Hollow, but if that project is funded by AML, the money can be used to connect Jenkins and Fleming Neon lines. Caudill also said Fleming-Neon will be connected to county lines at Deane and Kona when they are completed.

Fleming also asked about the possibility that Letcher County might be incorporated into a larger regional water district and Caudill said the Kentucky Division of Water encourages regionalization to eliminate redundant systems. He added that even if the county is incorporated into a regional district, he would encourage it to maintain control of its water lines. Fleming said he sees things moving that way as well.

In other business, the court heard a report from Randall Caudill of the Letcher County Airport Board. Randall Caudill said things have moved well for the board and asked the court to authorize payment of $500 ($100 each) from money already allotted to the board for options to five landowners for land for the airport. He said once land agreements are finalized, an environmental study will be commissioned and when it is complete, the project can go to bid. He said the U.S. Federal Aviation Administration will pay 90 percent of the total costs with the county and state each picking up 5 percent. He added that the county’s portion will be largely taken care of by money already spent and in-kind contributions such as work performed, etc.

The court voted unanimously to authorize an agreement allowing it to accept just over $1 million from the Kentucky Transportation Cabinet for road work. Judge Ward said the funds will come from the Secretary’s (of Transportation) Contingency Account Fund FD 39. He said he expects state paving operations to be finished soon and as soon as asphalt is available, county paving operations will get underway.

Fleming asked Ward if he had any further statement from the state concerning signs honoring veterans for roads, bridges, etc., and Ward said he had spoken to Department of Transportation officials. Ward said the county will not be retroactively billed for existing signs and said the practice can continue, but the court will have to designate entire state roads instead of a smaller section, such as between two-mile markers. He said the county will have to pay for signs in the future as well, but said he believes they will not be more than $100 each. Fleming said he’s afraid the county will run out of roads if it has to name entire roads instead of sections but Ward said the state requirement only applies to state roads and the court can name county roads, bridges, etc., as it pleases.

The court discussed placing selected county property and equipment as surplus. Judge Ward said county foremen are looking at what they can no longer use and Fourth District Magistrate Keith Adams said Revelation Ranch is interested in a tractor the county owns, and it has a truck it might want to trade for it. County Attorney Jamie Hatton said in the event of a trade, the county would have to receive fair market value and it is illegal for the court to give away public property for private purposes, even to non-profits. Hatton recommended selling the equipment at auction once it is designated as surplus.

The court discussed ongoing problems with stray animals and Fleming said the problem seems to be getting worse. Ward said the problem lies with rules that are made by the regional animal shelter on how many animals can be picked up. He said the shelter is overcrowded due to an adoption preference and said he believes overcrowding caused the epidemic that led to the deaths of hundreds of dogs and the temporary closing of the shelter. Ward said he has spoken with several other county judge/executives and they plan to ask that the shelter change its policies. He added that the Letcher County Shelter is ready to go as soon as a contract is finalized and County Attorney Hatton said he is trying his best to get the two parties together to finalize the agreement.

Members of the Letcher County Board of Education were unable to attend the meeting to discuss the delay in getting their property taxes finalized due to illness, but Judge Ward read a letter from the board saying it had received its rates late and had taken every step required by the state in a timely manner. Ward said the county had also received its rates late and that the board had been delayed because it had to schedule hearings in order to take a rate higher than the state recommended compensating rate.

Narramore also told the court the county has been chosen to receive assistance from the National Park Service Rivers, Trails and Conservation Assistance Program and the Mountain Heritage Trail has been selected as a new project to receive technical assistance to develop the trail in Fiscal Year 2013.

• The court voted to enter into a lease agreement with the Kentucky Association of Counties for new Mack trucks for county use.

• The court voted to name the bridge at Walters Branch off Highway 15, across from the Isom BP Station, for PFC Charles L. Adams, U.S. Army, Korean War.

Bank Balances for County Agencies as of October 10, 2012: