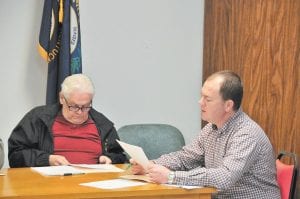 The Letcher County Fiscal Court effectively voted to close the county’s recycling program during a meeting on Tuesday.

The court, meeting in special session, voted by a margin of four to two to accept the second reading of an ordinance which calls for a $3 per month increase in sanitation fees. According to Letcher County Judge/Executive Jim Ward, an additional $3 per month would have been necessary to save the recycling program, but the general consensus from the court was the citizens of Letcher County do not support the additional rate increase.

Letcher County has been a leader in recycling, beginning with the establishment of the recycling center at Whitco and later adding the innovative “blue bag” program that allowed for the home pick-up of recyclables that were placed in special blue garbage bags. However, Ward said that with the recent cuts in coal severance tax receipts it is no longer possible for the county to absorb the losses from recycling. Recycling has also been discontinued in Jenkins and Fleming- Neon.

Ward told the court that the program actually generated about $19,000 a year from savings in landfall tipping fees (recyclables did not go the landfill like regular garbage) and the amount realized from the sale of recyclables such as cans, plastic, and paper. However, the cost to operate the program exceeded $200,000. The county collected 230.5 tons of recycling last year but recorded a deficit of $196,000 on the recycling program.

The motion to accept the second reading without change passed with a four–to-two vote, with District Five Magistrate Wayne Fleming and District Two Magistrate Terry Adams voting no. Both magistrates had opposed the original vote to draft an ordinance to raise the rates at the court’s November meeting. Fleming said he does not believe the people of Letcher County can afford a $3 increase in fees and Adams added that he does not think it is fair to raise the fees of people who pay their bills regularly to subsidize those who don’t.

Ward told the court that the collection rate for sanitation bills is about 90 percent and added that County Attorney Jamie Hatton has aggressively pursued delinquent accounts. Hatton told the court that he prosecutes between 20 and 30 delinquents every Wednesday, but said the process is very hands-on and requires much time. Adams asked if there isn’t a better way to identify people who don’t even receive a bill and Ward said the sanitation department has made great effort to work on the problem.

Ward told the court that the workers in the recycling program will be absorbed into the sanitation department wherever possible, but that it’s likely that most will be laid off. He said no one wants to see more layoffs but the recycling program’s labor cost of $196,000 per year had been the court’s biggest expenditure. Ward said that it would not be cost effective to absorb all the workers into the sanitation department, but that whenever vacancies occur, he will do his best to see that the laid-off workers back get a chance to be hired back.

Terry Adams asked for a vote to assure that laid-off workers will be hired back, but the matter was not on the required agenda for the special meeting, which was pointed out to the court by Chris Anderson of East Kentucky Broadcasting of Pikeville and also a Mountain Eagle contributor. County Attorney Hatton said a vote could be held at the next court meeting, but that it is not necessary since Judge Ward is in charge of county hiring anyway.

Citizen Gerald Hacker, of Little Colley, told the court that in his opinion the recycling program has been dead since it started. Tonnage numbers show an overall participation rate of less than 10 percent. Hacker said he does not believe that people can afford the increase.

The ordinance calls for a monthly sanitation rate of $15 per month (a $3 increase) for residential customers ($13 for senior citizens 65 years or older). There is a drop-off fee for waste at the transfer station for municipal, residential, or commercial customers of $50 per ton, which is an increase of $4.64 per ton. Commercial businesses will be charged $10 per yard of garbage collected at the business, a $1.66-peryard increase, and a $25 per pick-up load fee will be assessed for any resident who requests the collection of bulky rubbish and household material. This is in addition to the monthly sanitation fee. Dumpster rental will be $60 per month with a charge of $60 for each time the Dumpster is emptied, a $10 rate increase for Dumpster use and for dumping. Customers who have unused blue bags can use them for their regular garbage.

In other business, the court voted five to one to accept the second reading of an ordinance that increases the monthly telephone surcharge on every telephone in Letcher County by the amount of $1, which Ward said is necessary to properly fund the county’s 911 service. The original surcharge was $1.25 per phone and the new surcharge would be $2.25 per month. The vote to approve was five to one, with Fleming voting no.

In response to a question from Hacker, Ward said the rate increase will not affect the ability of the Letcher County Sheriff ’s Department to increase county patrols, but it will help with better communications with the Kentucky State Police at Hazard and with local first responder units.