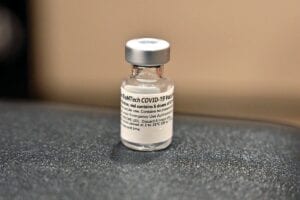 A vial of the Pfizer COVID-10 vaccine is displayed. (AP Photo/Timothy D. Easley)

Meanwhile, at least one more Letcher County resident has died from the virus. The Kentucky River District Health Department announced Monday that a 69-year-old man from here died over the weekend from COVID-19.

Cases in the state as a whole have been declining for several days, but they continue to increase here. As of Tuesday, there were 682 reported positive cases in Letcher County, up from 577 a week ago. That follows a week during which there were more than a dozen new cases every day. On Tuesday, the district health department reported 23 new cases in Letcher County, down from 37 on Monday.

The first vaccine to arrive is from Pfizer-BioNTech, with the first doses given to nurses at hospitals on the campuses of the University of Louisville and the University of Kentucky. Governor Andy Beshear said on Tuesday that the Moderna vaccine will begin arriving at all acute-care hospitals as early as Monday, the same day that CVS Pharmacies and Walgreens will begin giving the vaccine in nursing homes under contract to the state.

“These Pfizer vaccines and Moderna are absolutely game changers,” Beshear said. “They have 94-95 percent effectiveness and, it appears, minimal side effects.”

Kentucky will receive about 100,000 new doses of the Moderna vaccine, probably by the end of the week, said Scott Lockard, Director of Kentucky River District Health Department.

“ The Moderna has not been granted approval for Emergency Use by the FDA, but they’re having hearings this week, and they’re expected to get approval,” Lockard said.

In addition to doses for nursing homes and hospitals, Lockard said he has requested enough doses for.rst responders, including police,firefighters and emergency medical services personnel.The health department intends to give the vaccine to those populations at the local health department offices.

The vaccine is good for 30 days once it is thawed, so the district will be pushing for a rapid deployment of the vaccine once it arrives.

“If things go according to the initial plan, we’ll be getting the vaccine out to our partners and vaccinating first responders the week between Christmas and New Year’s and the week after that,” Lockard said.

After that, the vaccine will go to non-hospital, non-frontline medical providers such as home health nurses, physical therapists and others who are at lower risk. Teachers and school staff will follow that to allow for schools to return to session as safely as possible.

“We’ve been told that Moderna is really ramping up production and as soon as they get that (approval), we’ll start seeing more vaccine coming our way,” Lockard said.

Whichever vaccine people receive, it will require a second shot three to four weeks after the first one. The second doses will be delivered when they are due.