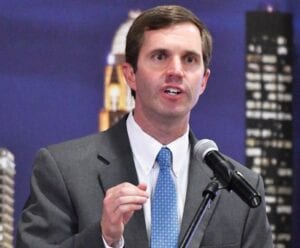 Andy Beshear’s first year as Kentucky governor was consumed by politically treacherous decisions to combat the COVID-19 crisis, which led him to restrict public life in unprecedented ways as infections and deaths mounted.

Amid surge after surge of virus cases, the Democrat temporarily closed or scaled back some businesses. He halted in-class school instruction. He preached the virtues of wearing masks and limiting public gatherings. His difficult decisions spurred legal challenges and protests, even to the point of armed demonstrators once showing up outside his home to hang the governor in effigy.

Like other governors, Beshear found himself at the forefront of a monumental health crisis that to a large extent will shape his legacy and determine his political future. His crisis-management skills were tested again during the upheaval that put Kentucky in the spotlight over racial injustice. Protests erupted in Louisville over the deaths of Breonna Taylor and George Floyd by police.

Beshear took the virus related pushback, much of it from Republican officeholders, in stride. But he acknowledged that steering the Bluegrass State through the deadly pandemic has been “hard emotionally” even as “it’s been really hard on every family out there.”

“The pressure of knowing that your decisions will determine how many people live and how many people die, that’s heavy, it’s very heavy,” the governor told The Associated Press in a year-end interview. “And knowing that every decision that you make, or that you don’t make, is going to be unpopular as well.”

“But I became convinced early on that this is going to be the most important task in my professional life that I’m ever called on to undertake and I was going to do it right. So no matter what the future implications are to me, if I do this right I’ll be at peace.”

Beshear said his actions, and the cooperation of most Kentuckians, have saved thousands of lives.

“You make the best call you can but you push on,” Beshear said. “Because if we stop, people die.”

More tough decisions loom as Kentucky grapples with the worst surge of the pandemic. And the governor will be watched closely as he oversees the distribution of vaccines.

It’s taken a political toll: Beshear’s rocky relationship with the Republican-led legislature worsened as the pandemic dragged on. GOP lawmakers denounced his virus-related actions as inconsistent. They criticized him for not consulting them on decisions even though he said he tried to always meet with GOP lawmakers when asked.

Beshear said he has worked well with GOP governors and Kentucky’s Republican secretary of state. “Responding to a pandemic takes strong executive action, and I made a choice early on that the primary voices that I was going to listen to were public health experts,” he said.

He also notes the state overcame daunting early challenges. When the virus first hit in March, testing capabilities were limited, he said. Now there’s an extensive statewide testing network, he said, and the state has strong inventories of personal protective equipment.

Pike County Judge-Executive Ray Jones said the governor has responded to a “very bad situation as well as anyone could have.”