COVID-19 pandemic has rocked our world 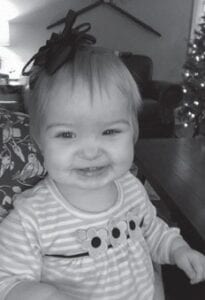 Happy New Year everyone! I hope everyone had a safe New Year’s Eve. I fell asleep as it was just a continuation from the old to the new.

As a new year begins, memories go back in time to the many New Year Eves that my husband and I would be out dancing the night away. I remember the preparation of getting ready to celebrate, the shopping for a new outfit, including shoes, making sure I had an appointment to have my hair fixed.

Our first years together we couldn’t afford to go out to celebrate. We would go with Jack’s sister and her husband; my favorite was his brother Don and his wife Margie Ballard. Then there would also be friends from Jack’s work.

There were times I would be the only person in our crowd that wasn’t drinking, yet I had more fun than anyone, as I have always loved music and the chance to be able to dance was all I needed. One thing about it, I didn’t have to worry about a hangover or a bad headache, plus I had small children that kept me on my toes. 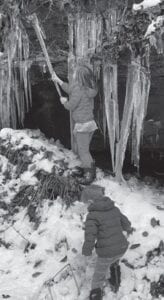 Michael Ison, of Kingscreek, had an adventure to find icicles for his two grandchildren, Hudson and Sedona Ruskamp from New York. Michael’s daughter, Brooke, and Jeff Ruskamp were visiting during the snow that hit the mountains.

I am thankful that I have the memories of so much fun that takes away some of the bitterness of a long drawn out divorce.

Over the years Stone Valley Square Dance was started in West Harrison, Ind., not far from us. Jack and I decided to take square dance lessons. I don’t have to even start to convey how much I enjoyed this new venture in our lives.

During my short childhood, I heard Mother talk about walking for miles across Big Branch Mountain to go square dancing at Nora Calihan’s on Paces Branch.

This square dance was Western style, not the old hoedown calls from the mountains, but some of the calls were the same, just at a slower speed. It was more choregraphed.

I must say and I am not bragging, but Jack and I were good at square dancing. We were invited with others to give demonstrations. We attended about three years, and finally the couple who had started Stone Valley Squares gave it up.

I hadn’t danced in 30 years when I decided to give it a try at Carcassonne Community Center and I became addicted. Then I had the accident and life has changed again for me.

As you that read my column knows I was still driving back to the mountains to listen, even though I couldn’t dance. Then this coronavirus pandemic or a plain old mystery virus has hit and rocked our world as we have known it.

2020 will surely go down in in history as the most unusual time of our lives that we all took for granted. I wonder if we will ever again be able to live our lives with the freedom we had. Never did I ever conceive the idea of having to wear a face covering just to do your normal things like going to a grocery store. Being given the advice to wash your hands.

Now that I can understand, as I have been in public bathrooms seeing with my own eyes that women will use the bathroom, bypass the basin as it takes so much energy to wash their hands, even though in some situations the water comes on automatically.

It makes me wonder if they work in a public place, serving food or waiting on people.

Growing up in the mountains, Mommy had an aluminum round pan that was used to wash our hands and face. We used the same towel to dry on, we also had a water bucket with a dipper, which everyone drank from, included people that would come to visit, which was very seldom.

Actually to think of some things I feel nauseated, as I literally can’t stand to drink after anyone. When my kids were little I would make sure they had their own cups. I never drank from them and wouldn’t let then drink after me.

As I started staying away from home at such an early age, it was amazing to finally be in a place with a bathroom, running water, a tub to take a bath in, not a washtub in the kitchen. Again, I was lucky as I was the oldest and I got to take my bath first, but that meant the other kids had to bathe in the water after me.

There are days I feel so bad I actually dread getting in the shower, then I feel so ashamed as I think back in bygone days, and even now the homeless people probably would love to be able to have what I dread doing.

While trying to write this column, I can’t seem to let my thoughts go forward as they keep slipping in reverse.

I really have to laugh as I read about families having so much in the mountains and wonder what were my parents thinking of. Daddy worked in a small coal mines, crawling on his belly at times to dig coal, having to leave home before daylight and not returning sometimes till after dark.

Daddy didn’t have a car during my short time of being home except two times as I recall. One when I was so young I don’t recall the name, except I knew it was black, and sort of square to the best of my remembrance.

I only remember riding in it one time, as he took Mommy and us kids to visit Mommy’s aunt Martha Jane Cornett who lived on Defeated Creek. At least I think that is where she lived.

Then when I was about 11 Daddy bought a white Henry J. Daddy never had a license yet he could drive.

Daddy would either start walking to work or someone would just pick him up, and the same way getting home.

My daddy was one of the hardest working men that ever lived, and the most honest.

Sunday was Old Time Fiddlers meeting, and a good time was had by everyone. I made vegetable soup and cornbread, plus lots of desserts were brought. We have safe distancing and wear masks when we are up walking around.

Les and Pat Wagner are still friends with me, although I forgot their birthdays on Dec. 2. They celebrate it together, so belated happy birthday.

Les and Pat get a fruitcake that is called Jane Parker that A&P used to sell. Oh how I would love just a morsel, just to taste.

Hello Buddy and Bernice Grubb, and to their grandson Mike. I hope everyone is doing alright.

Mike and Marcia Caudill, you really made my Christmas, watching the video of Santa and Mrs. Claus dancing at Carcassonne Community Center. I am hoping when March rolls around the Campbell’s Branch and Carcassonne centers can open again.

Hayward Day, it is great to hear from you and Kim.

Thanks everyone for the beautiful cards. Robert Wagner I hope this finds you doing alright.

Once again time is catching up with me, so until next time, Rose Ballard, 9110 Lawrenceburg Rd., Harrison, OH 45030, email: Bluegrassmama4@aol.com.