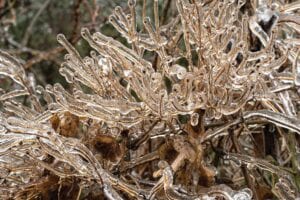 Ice storms like the ones that have hit Letcher County during the past week have slowed down COVID-19 vaccinations. (Photo by Chris Anderson)

Ice that has coated much of Kentucky has slowed down COVID-19 vaccinations, but it hasn’t stopped them, officials said.

More deliveries of the vaccine are expected to the area on Thursday, and more vaccinations locations are opening up. Gov. Andy Beshear announced on Tuesday that the federal government will increase Kentucky’s allocation of vaccine by another 29 percent next week, and at least two more vaccination locations will come online here.

Pine Mountain Pharmacy began giving vaccinations last week, and will begin again when more supplies arrive this week. Mountain Comprehensive Health Corporation has also been selected as the first Federally Qualified Health Center in Kentucky to receive shipments of the vaccine directly. Details of the MCHC allocations won’t be known until the company is briefed on the change today (Wednesday).

This is the first time any organization here other than the Appalachian Regional Healthcare System or the Kentucky River District Health Department has received shipments directly. Doses administered by MCHC earlier came from the health department’s allocation.

Kentucky’s allocation has increased by 57 percent since President Joe Biden took office on January 20. In addition, Beshear said the federal pharmacy program is expected to double the number of doses to pharmacies, and those will be in addition to the number allocated to the state.

Johnson and Johnson has also confirmed to the federal government that once its single-dose vaccine is authorized for emergency use by the Food and Drug Administration, it will deliver 100 million doses to the US government by June.

Kentucky has vaccinated about 12 percent of the state’s population at this point, and that combined with fewer large gatherings have contributed to a sharp decrease in the number of cases here. For the first time in weeks, Whitesburg ARH Hospital doesn’t have a single COVID patient admitted, Community CEO Dena Sparkman said.

Weather has affected the efforts this week, but Sparkman said it has not stopped them entirely.

“So far we have moved 55 Dose 2 Moderna that were initially set for Monday to Wednesday. We are also planning to do some Dose 1 Moderna tomorrow was well,” she said Tuesday. “As of now we have no word on the shipment of Pfizer vaccines that we normally do on Thursday and Friday. But we are hopeful that we can pick those up from Hazard and proceed as scheduled.”

The story is much the same across the region as roads have sometimes been too slick for even snowplows to travel.

“ Clinics have been closed this week, pushing back vaccinations,” said Scott Lockard, Kentucky River District Director of Public Health. “Also, the shipment of vaccine has been delayed this week. We should receive vaccine tomorrow (Wednesday) or Thursday.”

Schools here had been scheduled to restart for a hybrid schedule on Monday, but bad weather kept students in virtual classes. Meanwhile, the seven-day rolling average of COVID 19 cases has continued to decline. Last Tuesday, the incident rate stood at 29.8 for Letcher County. This Tuesday, the rate was 14.6, the lowest it has been since November. There had been just 32 new cases here in a week.

Experts have cautioned people not to stop wearing masks, and in fact, some have suggested wearing two masks if you are planning to be shopping or indoors in a public place for an extended period of time. Variants of the virus that are more contagious than the original pathogen have been identified all of the United States, and at least one variant that originated in the United Kingdom has been found in Kentucky. Health authorities say the numbers are declining not necessarily because of the vaccine, but because the holidays have passed.

Also, rates may rise again as people who attended Superbowl Parties begin to show signs of the disease. A few days ago, Kentucky’s entire southeastern border with Virginia and West Virginia had dropped into the yellow zone – signifying a rate of less than 25 per 100,000. However on Tuesday, Letcher and Harlan were the only eastern border counties with rates lower than 25. In Pike County, the rate was 25.7, and in Bell County it was 36.2. In all, about a third of Kentucky counties were in the yellow range.

The latest state statistics for Letcher and surrounding counties in Kentucky and Virginia are as follows.