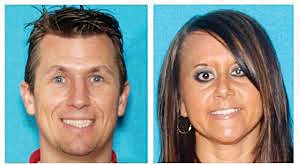 Murder victims Robert “Bobby” Jones, a Letcher County native, and his girlfriend, Crystal Warner, are pictured above. At right is a photo of Craig Pennington, the man accused of murdering them. He has died of COVID-19.

The man accused of murdering Letcher County native Robert “Bobby” Jones and his girlfriend, Crystal Warner, in 2016 has died.

Craig Pennington, 56, had been at the Marion County Detention Center awaiting trial when he became ill. Chief Irvin Mann confirmed that Pennington died at Norton Hospital in Louisville about 3:30 p.m. on Monday, December 28, of COVID-19.

Jones and Warner, who lived in Florence, were last seen when they left his parents’ house on Crases Branch in Letcher County after a weekend visit. They had planned to stop at Springfield to see if Pennington, who was renting a house Jones owned there, had obeyed an eviction order.They were never seen alive again.

Jones’s remains were discovered the afternoon of August 5, 2016, by four people collecting cans along Goshen Road in Winchester near U.S. 60 and I-64’s exit 101.

Clark County Sheriff Berl Perdue Jr. told The Winchester Sun newspaper that the remains were about 20 feet from the road, but at the bottom of an embankment.The couple’s car was found in Scott County in July. Warren’s body was not found until November 28, 2016, nearly four months after Jones’s body was found. Like Jones, Warner was found just off an I-64, this time about 40 miles away at the Salt Lick exit. She had been dumped on a farm near the community of Owingsville in Bath County.

Investigators told WLWT TV in Cincinnati that a skull found under a brush pile on private property by the operator of a bulldozer was found to be that of Warner. Some of her personal belongings were also found at the scene. Both Jones and Warner had been shot.

Pennington was arrested soon after the couple went missing and before Jones’s body was found. He was charged with murder, robbery, kidnapping, tampering with physical evidence, theft by unlawful taking of an automobile and wanton endangerment. He had been held in the Marion County Detention Center for more than four years before his death this week. The case had never come to trial.

Jones was a son of Bill and Sandy Jones of Letcher. Bill Jones is the pastor of the Letcher Independent Church. Bobby Jones’s siblings, Scott Jones, Sam Jones and Becky Isom, helped lead several unsuccessful searches for the bodies, including at least one in the Winchester area, near where Jones’s body was eventually found..