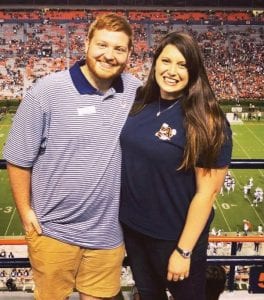 DUSTIN and COURTNEY FRAZIER are pictured at a football game at Auburn University, where she is a veterinary student. The two are Breathitt County natives.

Three weeks ago, Courtney Frazier didn’t have a care in the world.

She and her husband, Dustin, were in New York on spring break, enjoying a Broadway show and looking forward to returning to Auburn

University, where she attends veterinary school.

Social distancing wasn’t being talked about, and she was following the best advice she had at the time — washing her hands and using hand sanitizer religiously. But the day after the play, all Broadway performances were canceled and she got an email from her school — Auburn was taking all of its classes online in an attempt to slow the spread of SARS-CoV-2, the virus that causes COVID-19.

The couple flew home to Kentucky on Friday the 13th, and now, Courtney and Dustin haven’t seen each other since March 14. They are quarantined separately in Breathitt County after Courtney began exhibiting symptoms of COVID-19, and tested positive for the virus. (Courtney was released from quarantine Monday, her family was released Tuesday.)

“That Saturday, I had felt — the word I used was — crummy. I really did feel it was allergies that day,” Courtney Frazier said.

But that night, her fever went to 101.4, and her parents took her to the hospital, and since she had traveled from New York recently, the hospital tested her for COVID-19.

She and her parents were quarantined. Her husband was quarantined separately with his family, with whom he was visiting after the trip. None of them have symptoms, but all of Courtney’s family does.

“I have made a big improvement, but I still have some signs so I have to stay quarantined,” she said last Thursday. “It hasn’t been as severe for me as it has been for other people, I’d say. It started out with fever, coughing, feeling fatigued and I’ve noticed when I try to go upstairs, I get really winded.”

Her father, Mark Hamblin, has a much more severe case. At 49 years old, the normally active heavy-equipment operator has severe shortness of breath, though he is still being treated at home, Courtney’s mother, Rena Richardson Hamblin said.

“He can actually have shortness of breath while he’s sitting down,” Rena Hamblin said. “My husband is very active. He’s one that never sits still, so this really has hurt him.”

Courtney said one of the fascinating things is how the virus can be so different in different people. She completely lost her sense of smell and taste early on, but her father has never experienced that. He has had a runny nose and severe chest congestion. Her mother and cousin have only mild symptoms. Her husband and his family have nothing.

Rena Hamblin said she wants people to know that the two cases in Breathitt County are from the same family because she doesn’t want people to be afraid that the virus is spreading faster than it really is.

“When the Governor said there was a second case in Breathitt County, we were hoping they would say it was the same household so it wouldn’t scare people so bad,” she said.

But neither she nor Courtney are criticizing. Gov. Andy Beshear, they believe, is doing an excellent job of managing the crisis, and they encouraged others not to be afraid, but the follow the advice he has put out.

“I think Beshear is doing everything he can to keep it from overwhelming our hospitals and healthcare system,” Rena Hamblin said.

Both said that while they know people are working as fast as they can to make test kits, they hope it goes fast.

“I do hope that soon, if people want to be tested, they will be able to get tested to alleviate some of the fear,” Rena Hamblin said.

And Courtney Hamblin said people should be cleaning their cell phones during the pandemic.

“Disinfecting phone is a big thing,” she said. “I can’t count how many times I ate in a restaurant and laid my phone down on the table.’

While there is a lot of misinformation and a lot of fear in the communities, their community has pulled together and made sure they have enough to eat. A school librarian, Rena said she took her daughter to the hospital on the Saturday before her twice-monthly Monday payday, and they were quarantined before she could get her check or do her grocery shopping.

She said the community has closed in around them and been very supportive, providing household goods and food to get them through the quarantine.

“Our community has been unbelievably nice,” she said. “In some places you have drive-by shootings, we have drive-by drop-offs — people don’t even ask anymore. They just drop stuff off for us.”

More From COVID-19 Go To The COVID-19 Section