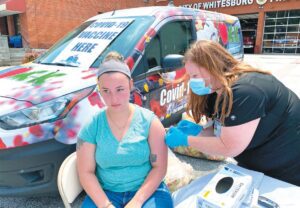 Haley Berryhill looked away while receiving a Moderna COVID-19 vaccination from Mountain Comprehensive Health Corporation LPN Stephanie Eldridge. Eldridge and other MCHC staff members set up along Main Street in Whitesburg on Friday to provide the free shots amid the county’s ongoing virus surge, which continues to grow worse by the day after a two-month respite earlier this summer. (Photo by Chris Anderson)

With absences piling up, positive COVID-19 cases now reported among the district’s students, and entire classes currently in quarantine, Jenkins Independent Schools will close its doors for two weeks in response to an ever-developing pandemic situation.

Jenkins Independent Schools Superintendent Damian Johnson told The Mountain Eagle on Tuesday that the school district will shut down for the next two weeks in response to widespread absences and quarantines among its students. The decision came a day after the district’s board of education voted to mandate the use of masks or face coverings by all students and staff members — action that was rendered moot on Tuesday when Gov. Andy Beshear mandated the use of masks in all of Kentucky’s schools in an attempt to mitigate the spread of COVID-19 and the highly contagious “delta” variant of the disease.

Nearly a third of Jenkins Independent Schools’ students were either out of class due to quarantine or absence on Monday, the fourth day of classes since the school year began Wednesday, August 4. With the temporary closure, students in Jenkins will return to class on August 23.

“We’re at a point where we’re going to have to back up and punt,” Johnson said. “We have 65 on quarantine and another 70-some absent, so you can’t have school if there are no kids to go to school.”

The COVID-19 situation with Jenkins Independent is rapidly developing.

At a special meeting Monday evening, the Jenkins Board of Education voted unanimously to approve an amended school reopening plan which now includes requiring the wearing of masks by students and staff members. The board also approved allowing Superintendent Johnson to make amendments to the reopening plan without seeking board approval for individual proposed amendments. The actions taken Monday superseded Jenkins’ previous plan of beginning the school year by not requiring face coverings be worn by students and staff.

The actions also came just hours before the district called off classes for Tuesday “out of an abundance of caution due to the increased community spread” of COVID 19 in Letcher County.

At Jenkins, most of the sixth and eighth-grade classes, a total of approximately 65 students at Jenkins Middle School, are under quarantine and not allowed to attend school after having possibly been exposed to COVID-19. Those students, Johnson said, will not be allowed to return to class until Aug. 17, and any sibling student residing with those currently quarantined students, will not be allowed to return until nearly two weeks after that date.

Johnson said had the district required masks to be worn by students and staff members at all times, the number of students quarantined as a result of possible exposure to COVID-19 may have been drastically reduced. He said pivoting to requiring masks will help mitigate similar situations in the future.

“If we had been universally masked and three feet apart, it would have been more like 8 to 10 kids (quarantined),” he said. “Our goal is to have these kids in this building in front of a teacher. And it looks to me like, no matter what you believe and no matter how you feel that with the rule as they are, the only way to keep kids in the building at this time is to universally mask.”

Letcher County’s COVID 19 incidence rate as of Monday stood at 61 daily cases per 100,000 population, with the county being one of 104 counties in Kentucky currently in the “red,” or “high” incidence rate for new COVID-19 cases. Monday also saw about a third of Jenkins Independent Schools’ students out of class. Johnson said in addition to the approximately 65 sixth and eighth-graders in quarantine, there were 73 additional absences — 32 at Jenkins Elementary School and 41 at Jenkins Middle- High School — reported on Monday.

Johnson, after Monday’s meeting, pushed back at the notion of an “outbreak” of COVID-19 in the school district. He said only two cases of COVID-19 had been reported amongst the district’s pupils and neither of those cases originated or, thus far, transmitted in the district’s facilities. Those remarks came before Tuesday’s developments.

Johnson said the additional absences on Monday may be attributed to a number of factors, including fear amongst students and their guardians and confusion about the ever-evolving pandemic situation. He said, however, that students should be in the classroom if they are well, and that keeping those students at home if they are not sick is causing severe harm to their educational experiences.

“If you are truly afraid and you have truly kept your kids away from everybody else, you’ve followed all the safety precautions, you’ve masked whenever you were out in the public, you’ve been socially distanced, then I understand and I respect that, but you’ve got to value education,” Johnson said on Monday. “If exercising your right to not wear a mask while going on vacation, to be in public crowds, if that’s important to you, then education should be important, too.”

Johnson said the district is practicing an intensive cleaning process when classes change, and students are required to sit in assigned seats. He also said the district has ordered air purifiers for each classroom at a cost of approximately $1,000 per classroom.

“It’s my duty to keep the doors open and ensure that the students of Jenkins Independent are presented with the best education that we can present them with … and what I learned from the first occurrence of positive cases was that we can’t do that without universal masking,” he said. “It pushes us to quarantine many more students than would be quarantined otherwise and there is not a level of student engagement to make that a viable option for us.”

The mask mandate at Jenkins Independent Schools was to be effective immediately.

In other business at Monday’s special meeting, the Jenkins Board of Education approved a bid from Irwin Seating Company from Illinois to replace bleachers in the Jenkins High School gymnasium. Johnson said the bid was for $65,515, which was about one-third the amount bid by the next lowest bidder.