‘Cow’ is loose in county 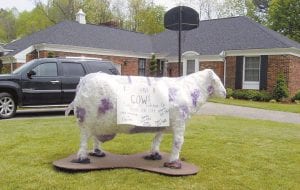 MAYOR HAS A COW – Whitesburg Mayor James W. Craft and his wife, Letcher Schools Supt. Anna Craft, woke up one morning last week to find this purple cow named Myrtle in the front yard of their home at Westwood. The cow is being used to raise funds for the American Cancer Society’s Relay for Life event coming up soon in Letcher County.

If Gelett Burgess was still alive and if he visited Letcher County during May, he would no longer be able to claim never having seen a purple cow.

In 1895 Burgess wrote this well-known poem appropriately titled “Purple Cow”:
“I never saw a purple cow
I never hope to see one;
But I can tell you, anyhow,
I’d rather see than be one!”

People first caught a glimpse of the purple cow on May 1 while driving by the house of Whitesburg Mayor James W. Craft and his wife, Letcher County Public Schools Superintendent Anna C. Craft, which is located at the mouth of Westwood.

Alberta Perry, chairperson for the Letcher County Relay for Life Committee, said the response has been so overwhelming that the cow has many places to go.

Perry hopes to keep the cow in front of businesses during the week and at residences on the weekends. Perry said the plan is to have the cow sit at locations for at least six hours, but committee members will move the cow sooner if requested.

WXKQ radio station, where Perry works, has started giving away prizes to listeners who call in when asked to say where the cow is at that particular moment. Perry said people are really interested in the cow. Kevin Day, with WXKQ, has named the purple cow Myrtle.

The cow was originally made by Food City employee Jeremy Sparkman as a Valentine’s Day promotion for the store’s floral department.

Doris Banks, a florist at Food City, said she and store manager Shaun Marcum were trying to think of a way to sell lots of flowers on Valentine’s Day. Marcum said he wanted to include a cow in the display.

Despite schools being closed because of the flu and other illnesses, Banks said the cow did her job.

Originally named Beula, the cow was made out of two-byfours, chicken wire, newspaper and tissue paper for a total cost of about $21. Beula was pink and brown.

Marcum recently donated the cow to Relay for Life. Volunteers took off all tissue paper and newspapers, added new paper to the structure and painted the cow white with purple spots. The cow is even covered in plastic wrap to endure rainy weather.

The fund-raiser was just supposed to take place during May, but Perry said it may last longer depending on the popularity of the purple cow.

Banks said stuffing falls out of Myrtle each time she is moved and said her legs are about to give out.

Banks said it takes about six people to move Myrtle around the county. Someone has to sit in the back of a truck and hold on to the cow while the vehicle travels slowly down the road. A couple of cars follow to help unload the cow.

Fleming-Neon Elementary School teachers had Myrtle placed first at the home of FNES Principal Sharon Meade and her husband, Eugene Meade, who is director of Southeast Kentucky Community and Technical College’s Whitesburg campus.

The cow had a very short stay at Fields Cliff in Whitesburg because the Meades caught the Relay for Life Committee members unloading the cow in their yard and paid them to load up the cow and move it to the Crafts’ yard.

From Westwood the purple cow traveled to downtown Whitesburg in front of the office of Assistant Commonwealth’s Attorney Kevin R. Mullins. Next the purple cow attended a Kentucky Derby party Saturday at attorney Daniel Dotson’s house at Jenkins. On Sunday the purple cow grazed at Dunham at Hazel Thacker’s residence and then at the Burdine home of April Damron, the Jenkins High School softball coach.

Myrtle sat in front of Standard Laboratory in Mayking at 8 a.m. Monday and was soon transported to David Narramore’s dentist office. Narramore didn’t let the volunteers unload the cow. He paid them and had them move her on to the next location, which was in front of Community Trust Bank in downtown Whitesburg. Monday evening Myrtle was moved in front of James Craft Jr.’s law office.

Tuesday morning Letcher County Sheriff’s Deputy Eugene Slone, who is a victims’ advocate, wheeled the purple cow on a hand truck down Main Street from James Craft Jr.’s law office to Everidge Funeral Home. Myrtle was then moved across the street in front of Letcher Funeral Home.

Myrtle’s next destination was supposed to be the yard of Nathan and Lois Baker’s house located on Bentley Avenue.

Perry said the cow has been scheduled to make stops in Isom, Payne Gap, Goose Creek and Ermine.

The purple cow is one of several fund-raisers sponsored by the Relay for Life Committee. The group will be hosting a Miss Golden Girls pageant at 6 p.m., May 10, at the West Whitesburg Elementary School auditorium. Cost for admission is $3 for adults and $1 for children. Contestants age 55 or older will compete in talent and casual wear. The contestant who raises the most money for Relay for Life will be named the overall winner of the pageant.

Letcher County’s Relay for Life event is set for June 6 at the River Park in Whitesburg. Teams of people take turns walking around a track until the event is over the next morning. The event raises money to help fight cancer while raising awareness of cancer prevention and treatment.