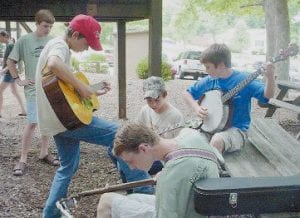 In its sixth year of teaching traditional mountain music, the Cowan Creek Mountain Music School is gaining recognition far beyond the narrow hollows of Sturgill’s Branch of Cowan Creek. Students come not only from Letcher County and surrounding counties, but also from surrounding states and beyond. This year students came from as far away as California, Florida, New Jersey, Kansas, Wisconsin and Missouri.

The school attracts a diverse group of students ranging from beginners to advanced youths to adults. Of the 119 students enrolled for the class which ran the last full week in June, approximately 20 were beginning youth, 40 were advanced youth, and 60 were adults. Tuition from the adult students helps provide scholarships for needy youths. 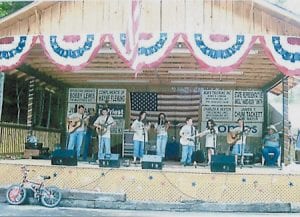 ON STAGE – The Cowan Creek String Band performed at the bluegrass music festival at the Little Shepherd Amphitheatre last year.

Traditional mountain music, sometimes called ol’ time mountain music, is not necessarily preserved by accomplished musicians who write every note as sheet music. Matter o’ fact, most of the music is preserved by passing it on from one person to another and many times telling the story of its origin is part of the process.

After each class the students retreat to the serene wooded campus for informal practice sessions. Some of the beginners will be found learning basic chords and practicing the soft touch of the bow while groups of advanced youths get together to play the old Earl Scruggs version of ‘Foggy Mountain Breakdown.” Proud family members and teachers beam with pride as they observe their eager students progress by the hour.

Nell Fields, director of the Mountain Music School, stated that the staff attempts to keep the kids interested by encouraging them to participate in the pick and bow class at the grade school and to attend informal jam sessions and workshops at Appalshop, a multimedia organization in Whitesburg.

“These young people are the next generation of musicians. They are the ones who will be given the responsibility of preserving our musical heritage which has been handed down by our ancestors for more than 200 years,” said Fields.

Last year the Cowan Creek Mountain Music School kids performed at the Cumberland Mountain Bluegrass Music Festival in Jenkins in July and at the Indian Summer Folk Festival in October where they were crowd favorites. On July 14 the kids will again perform at the bluegrass music festival on the stage of the Little Shepherd Amphitheatre. In a highly anticipated addition to the performance, the Cowan Creek Square Dancers will dance to the music of well-known musician Lee Sexton. He is credited with having resurrected ol’ time mountain music which was near extinction.