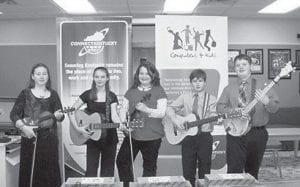 Traditional mountain music most assuredly will be around for another generation, thanks to a program which began as an effort of Appalshop in 2002.

What began as a summer program for disadvantaged youths was funded by the Letcher County School Board of Education 21st Century Learning Center and hosted by the Cowan Community Center. The program was such a positive experience for youth and was so welcomed by the community that when Appalshop’s grant expired, the Cowan Community Action Group was determined to keep the program alive so they took over full production of the program. The Cowan Creek Mountain Music School was established and each year conducts classes for adults and youths during the last full week in June.

Last year 128 students enrolled in the school and half of these were age 18 or younger. The school is selfsustaining through a tuition fee of $150 for Kentucky residents and $200 for outof state students. Scholarships are made available from donations and various fund-raisers.

The organizers of the school saw the need to keep the kids interested year around, so the ‘Passing the Pick and Bow’ after-school music program was started in the Cowan Elementary School. Some of those kids who were as young as age six at that time are now age 11 and 12, and are given plenty of opportunities to grow musically each year.

The school also sponsors a series of square dances in the community to coincide with the spring and fall school semesters. This provides opportunities for the students to join the volunteer musicians — the core being the instructors, in the after-school music program — to build their confidence and gain valuable experience performing before a live audience.

The mentors created an environment of ‘fun’ learning experiences for these young musicians as they offered encouragement, patience and praise to each student. When the word spread about how the program was preserving traditional mountain music, civic groups and festival organizers contacted the center to book them for their events. Performances were held at the Kentucky Folk Life Festival, Letcher County Mountain Heritage Festival and at the Little Shepherd Amphitheatre in Jenkins. In 2008 the group performed at Seedtime on the Cumberlands festival when they opened for the Kathy Matea concert.

In October, 2007 State Representatives Leslie Combs and Ancil ‘Hard Rock’ Smith saw the Cowan Creek Youth String Band perform at the Indian Summer Folk Festival in Jenkins and decided to spread the word about the wonderful group of young musicians. In 2008 the kids were honored by being invited to perform at the House of Representatives in Frankfort, where they were presented with individual citations from their state representative and the program was given the Governor’s Award in the Arts.

On May 9, the Cowan Creek Youth String Band will perform at River Park in Whitesburg during the Relay for Life Spring Fling. There will be live music on the stage from 11 a.m. to 6 p.m. There will also be arts and crafts, novelties, kiddy rides, food booths and much more. All profits will go to the American Cancer Society.

This event is organized by Friends of Letcher County in partnership with the Letcher County Relay for Live Committee. For additional information, call Alberta Perry at 855-7962 or Ked Sanders at 832-4122.