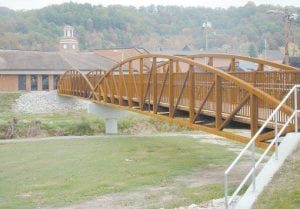 NEW BRIDGE PLANNED – The City of Whitesburg is moving ahead with plans to build a pedestrian bridge that will be modeled after this one in the Magoffin County town of Salyersville, Whitesburg Mayor James Wiley Craft announced in his “state of the city” address for 2007. Craft and members of the Whitesburg City Council visited the bridge earlier this fall. The new bridge, which is expected to be located at the end of Broadway Street, will span the North Fork of the Kentucky River.

Demolition of the dilapidated Suburban Motel and the arrival of a new cable television provider were among the first-year achievements cited by Mayor James Wiley Craft in his “state of the city” address to the Whitesburg City Council.

Craft told the council during its December meeting that two things he promised to do while running for office were to clean up the motel lot in downtown and to improve the city’s cable TV service. Construction is expected to begin soon on the new Letcher County Health Department building that will replace the motel. The city council last week held the final reading of an ordinance which makes TVS Cable of Hindman the new owner of the city’s cable TV franchise.

Craft also reported the city has received a federal T-21 grant of $176,000 from the Department of Transportation to pay for a pedestrian bridge that will be built across the Kentucky River near the end of Broadway Street. Craft told the council that benches and flowerpots will be installed on the bridge when it is finished. The bridge will be 100 feet long and 15 feet wide.

Craft thanked members of the council for their willingness to work with him, and for helping to make City Hall more friendly and accessible to the citizens of Whitesburg and seeing that complaints are dealt with quickly and efficiently.

. The pouring of concrete for the city/county skate park in West Whitesburg. With equipment now being installed, Craft said the park should be open by the end of the week.

. Working with the Kentucky Department of Transportation to have debris removed from the bridge piers in the Kentucky River.

. The reinstatement of celebrations for July 4 and Labor Day. Craft said both were well attended by people from all over the county.

. Setting the taxes on limited alcohol sales in the city. Craft said the city has realized over $20,000 in tax revenue so far, some of which was used to purchase new Christmas decorations for the city.

. The purchase of a fourwheeler for city employees to read water meters which will save on fuel costs.

. The soon-to-open U.S. Passport Office, which will begin to issue passports after January 1. Craft said anyone wishing to obtain a passport should contact City Hall for instructions.

He said he also is currently looking for funding to enclose the city swimming pool so it can be used as a year-round facility.

Mayor Craft also complimented everyone associated with the December 7 Christmas Parade. He said it was one of the best ever and added that he would like to put speakers in different locations of the city to play Christmas songs and music for other special occasions. Council member Freda McFall told Craft she has heard a lot of favorable comments about the Christmas Parade and said she wanted to thank all the merchants in the city who participated by decorating and providing refreshments for people who attended the parade.

In other business, the council voted to authorize Craft to act as the authorizing official for an Environmental Protection Agency grant which will be used for the city/county wastewater plant project. City Clerk Garnett Sexton will serve as financial officer. The city will be required to participate in ASAP, which will allow for electronic banking transactions between the EPA and the city.

Workers for Veolia Water told the council that rags and other debris at the “John High Pump Station” are becoming a major problem and cost the city an inordinate amount of money in repairs, equipment, and time. The station, located in West Whitesburg, serves the line that runs from the Letcher County Jail. Veolia workers said it is probable that most of the socks, underwear, sheets, and other items they continually remove from the pump station come from the jail. They discussed the possibility of putting grating in the manhole that serves the jail to prevent debris from entering the sewer system.

Kevin Howard of Summitt Engineering told the council the city is within its rights to approve a pre-treatment ordinance for sewers which will say what can and cannot be put into the city’s waste system. Howard also presented the city with preliminary plans for widening and expanding turning lanes at the junction of Maple Street and Kentucky 15. Howard said it will cost approximately $7,500 for engineered drawings to present to the state. Craft received permission from the council to enter into an agreement for the plans and told the council the plans will be necessary in order to obtain state funding for the work.

Howard told the council that work has begun on the city/ county wastewater treatment plant. He said the contractor has put in work trailers and an office trailer and is building fences and doing other preliminary work for the project.

The council also conducted the second and final reading of Ordinance 2007- 10 which awards the city cable television franchise to TVS Cable of Hindman and Ordinance 2007- 9A which will keep the city in compliance with state and federal flood insurance regulations. Summaries of both ordinances appear in the public notices section of this week’s edition of The Mountain Eagle.