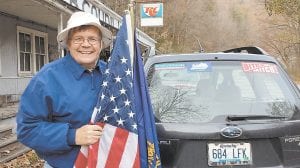 Craft, a Whitesburg attorney and two-term mayor who some observers believed to be vulnerable because of a payroll tax approved by the Whitesburg City Council last summer, received 384 votes compared to 234 votes for Narramore, who is Letcher County’s Tourism Committee chairman, and 108 votes for Griffith.

“I am the first three-term mayor in Whitesburg in 20 years,” said Craft. “I’m looking forward to finishing some of the projects we already started and doing the things I have said in your paper I was going to do. I will do my best to make all of the people proud not only of me, but the City I live in.”

For the most part, incumbent members of the Whitesburg City Council also showed no ill effects from the 1.5-percent payroll tax they voted to approve, as all but one of six incumbents were reelected on Tuesday. Incumbents James W. “ Jimmy” Bates ( 314 votes), Shelia Page Shortt (285), Robin Bowen Watko (266), Earlene Williams (413), and Larry D. Everidge (356) will return to office in January. They will be joined by council newcomer Derek Barto (358 votes), who is Letcher County’s Director of Recreation.

In Jenkins, Kincer was defeated by 10 votes by former City Manager Todd Depriest, who was fired by Kincer after he filed to run against him. Depriest received 217 votes, compared to 207 votes for Kincer.

Kincer had received praise from many Jenkins residents for bringing legal alcohol sales to certain restaurants in the city and for his effort in constructing a new city swimming pool/restaurant complex, but received criticism from others who became upset when he divorced his wife and married a Jenkins city employee.

Fleming-Neon Mayor Susan Polis held off challengers Gwen Johnson and Joe Brown to win another term in office. Polis received 118 votes, to 88 for Johnson and 21 for Brown.

“Thanks to everybody who supported me and we’ll continue to serve the county and improve the coroner’s office as we have for the past four years,” said Baker.

Baker received 3,770 votes to Campbell’s 3,741 in what proved to be the closest race for county office.

Campbell said she knew it was going to be an uphill battle.

Voters in the City of Fleming-Neon gave their nod to all five incumbents by voting them back onto the city council. Trey Quillen received 170 votes. Tom Haynes got 154 votes, Linda Cantrell received 153 votes, Jeff Breeding got 151 votes, and James D. Collins got 131 votes. Write-in candidate Susie Fleming received eight votes.

With 5,760 votes, Letcher County Sheriff Danny R. Webb has been re-elected to his fourth term. Republican Roland Craft got 1,768 votes.

“I want to thank everybody for coming out and voting for me,” said Webb. “I’ll continue to do the best job I can. As usual, people can call me on my cellphone or at my office. I am honored that the people of Letcher County have enough confidence in me to elect me to my fourth term.”

Letcher County Judge/ Executive Jim Ward has been elected to a third term with 5,329 votes. Hatler D. Kiser, the Republican nominee, got 2,205 votes.

“I just want to thank all the people who supported me,” said Ward. “We are going to keep trying to finish projects we have started. I really appreciate everyone who supported me and I look forward to serving the citizens of Letcher County for another four years.”

District One Magistrate Bobby Ray Howard has been re-elected to a second term. Howard received 1,350 votes while Randy Parsons got 592 votes.

With a difference of 40 votes, District Two Magistrate Terry Adams was reelected with 691 votes. Kenneth R. Anderson got 651 votes.

Lena Parsons ran unopposed for the District One seat on the Letcher County Board of Education. Parsons received 959 votes. District One includes Isom, Colson, Baker and Neon.

Sara Tackett Brown ( 574) and incumbents Brenda DePriest (495) and Eileen Sanders (467) are the top three vote getters who have earned seats on the Jenkins Independent Board of Education. De- Priest is the wife of mayoral candidate Joe DePriest. Rodney Rose got 449 and current board chairman Durward Narramore received 308 votes.

Local incumbents who were re-elected with no opposition are listed below with vote totals:

Incumbent Janet Stumbo got 3,960 votes in Letcher County and W. Kent Varney got 2,227 votes in the race for Court of Appeals, 7th District, 2nd Division.