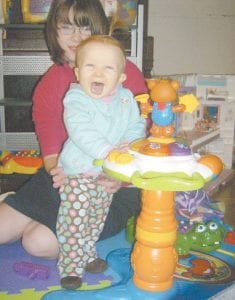 HAPPY BABY — Grace Anne Long, who will turn one on Saturday, plays under the watchful eye of sister Stephanie. Grace suffers from a disease that is almost always fatal.

A Letcher County baby who has been diagnosed with a rare disease that is almost always fatal will be beating some long odds Saturday when she celebrates her first birthday.

Grace Anne Long was diagnosed with a rare chromosomal abnormality when she was 15 days old and her parents, Seth and Sheryl Long of Craft’s Colly, have been cautiously awaiting the day she will turn one year old.

Only about 10 percent of those diagnosed with Patau Syndrome, also known as trisomy 13, live to their first birthday. Grace, who has partial trisomy 13, will turn one on Saturday.

Partial trisomy 13 occurs when part of an extra copy of chromosome 13 is present and disrupts the normal course of development. Trisomy 13 is a nondisjunction disease similar to Down syndrome. Down syndrome, also called trisomy 21, is caused by the presence of an extra 21st chromosome and occurs in one out of every 1,000 births. Trisomy 13 occurs in one out of every 10,000 babies born every year in the United States.

Mrs. Long said when she was first told that Grace may not live to see her first birthday, she had to focus on her baby daughter’s immediate needs.

“As the days turned into months, we hoped that we would be able to celebrate her first birthday with her but dared only to take one hour, one day at a time,” said Mrs. Long.

“It is hard to explain living with the knowledge that 90 percent of trisomy 13 children do not live to see their first birthday and our child has partial trisomy 13,” she said. “After reaching their first birthday, the children are considered longterm survivors. Even after the child turns one, the children are not all of a sudden better. Their parents and doctors have a better understanding of what they need and what is helpful in different situations.”

Grace’s eyes have greatly improved since she was diagnosed. Mrs. Long said that when an ophthalmologist examined Grace’s eyes when she was two weeks old, the doctor could barely see her eyes.

“The ophthalmologist informed us that she may have anything from no sight to good sight,” said Long. “When bringing Grace home we noticed that she only opened her eyes in low light situations.”

At a November visit during which the Longs thought Grace was about to be fitted for glasses, they were surprised by what the ophthalmologist discovered.

“(He) said that this does not normally happen, but Grace’s eyes had grown in size and were continuing to improve in what they could see,” said Mrs. Long. She said the doctor told them that Grace will only need glasses to read and drive a car.

Grace is continually one month behind in her developmental milestones and several months behind in speech and language skills. She can now sit on her own. Mrs. Long said Grace can stand for short periods of time if someone holds her hips.

“She has lots of willing hands within her family ready and willing to help,” said Mrs. Long. “She enjoys being upright a whole lot more than in the crawling position.”

Mrs. Long said Grace enjoys eating baby foods and “coughs and waves her hand when she has had enough food” to eat. She can wave “bye-bye” with her right hand, plays with toys, and enjoys being with her family.

“She likes interactive games like peek-a-boo and patty cake,” said Mrs. Long, adding that Grace is drawn to toys with lights and enjoys singing and listening to a guitar and piano being played.

“She will open her mouth wide and ‘AAAAA’ along with the song,” said Mrs. Long. “Her favorite song is still ‘Happy Birthday’ which we sing to her almost every day.”

Grace’s family and friends plan on singing “Happy Birthday” to her throughout the day on February 7 and will celebrate the occasion by eating frozen yogurt in a cone.

Mrs. Long said community members have made their last year easier by helping in many ways — by saying a prayer, preparing a meal, or helping transport their other children.

Mrs. Long said she will continue to enjoy every moment she is able to be with Grace.

“Only God knows the time or hour of our life,” said Long. “We are enjoying each day the gift of Grace Anne’s life.”