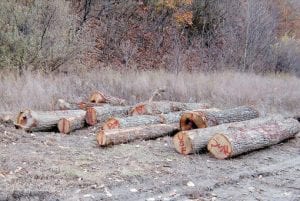 LEFT BEHIND – Marvin and Verna Potter say timber thieves left these logs behind, but made away with some that measured nearly five feet in diameter.

Authorities have opened an investigation into the alleged theft of 32 oak trees from property belonging to an elderly Ermine couple.

Marvin Potter, 81, and Verna Potter, 77, told police a crew of loggers came onto their property last month and cut and removed red and white oak trees valued at more than $50,000. One of the trees was at least 60 inches in diameter, the couple said.

Kentucky State Police detectives visited the couple’s property last week and have opened an investigation. The tract is located in Craft’s Colly, about five miles from the Ermine Post Office.

The couple wrote a letter to the editor of The Mountain Eagle this week in which they say the person in charge of the crew which cut their timber offered to pay $1,700 for “what he had taken.”

“We wanted to leave those trees to our children and our grandchildren,” the couple say in their letter. “It was their inheritance and we have worked our whole lives to save that for them. We are not wealthy people so this hurts us more than most.”

The Potters say their property boundaries are well defined and should have been obvious to the master logger who was overseeing the cutting of the trees on their property.

“He is licensed by the state of Kentucky as a master logger and should know what he did is illegal,” the couple say in their letter. “The law requires loggers to have an agreement with the property owner, and to formally notify adjoining landowners to assure they do not stray onto adjoining land. … Every tree he cut was on our land, so it was not a case of accidentally straying from another property.”

The Potters charge that when neighbors found the crew cutting their timber “the loggers fled, leaving their bulldozer behind.”

The Potters say many of the trees were “magnificent, severalhundred year-old oak trees.”

“No trees had been logged on that land for five generations,” the letter said. “Several of the oaks the loggers took were barely short of five feet in diameter. … They literally destroyed our property.”

A Blackey man who now follows cases of alleged timber theft in eastern Kentucky said many of the trees taken from the Potters “were in the 44-inch range” in diameter, and that many of the trees “could knock down $2,000” in price.

“It was really valuable timber,” said Dean Cornett, who has been assisting the Potters since being contacted by relatives of the couple.

Cornett said a survey of the Potters’ property shows that all of the trees that were cut did in fact belong to them.

“It’s the most easily defined boundary I’ve ever seen,” Cornett said. “It was all taken from their property.”

Cornett said all of the oak trees appear to have been centuries old when they were cut. He said he knows of a 250-year-old oak tree that is half the size of some of the ones taken from the Potters.

Cornett said he has also been contacted by a Michigan family who recently discovered that trees were being cut illegally on property they own at McRoberts.

The Potters are encouraging people who suspect that timber is being cut illegally to contact police.

“Stealing is stealing and these people need to be stopped – now,” the Potters say in their letter, which appears on Page 4.