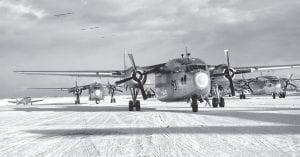 The C119F Flying Boxcar transport plane (seen above and at right) was very popular during the Korean War era and was praised for its ability to move heavy equipment and arms as well as U.S. troops. Two soldiers from Letcher County were killed March 30, 1954, when one of the planes crashed into a mess hall at Ft. Bragg, N.C. (AP photos)

Two Letcher County soldiers were among seven men killed and 10 injured on March 30, 1954, when an Army C119F Flying Boxcar transport plane from Charleston Air Force Base, South Carolina, crashed into a mess hall at Ft. Bragg, N.C., while attempting an emergency landing on a narrow parade field. Airman 1st Class Rudoph V. Short of Blackey, a crew member of the plane, was listed as missing before his body was discovered. Pfc. William Cook of Whitesburg was one of three soldiers in the mess hall who were killed. Short was the son of Mr. and Mrs. Lester Short of Blackey. Cook was the son of Mr. and Mrs. Has Cook of Whitesburg. The following report from the now-defunct wire service United Press appeared in newspapers across the U.S.

A crippled C119 Flying Boxcar, its pilot fighting to make an emergency landing on a narrow parade field, crashed into a mess hall here Tuesday [March 30, 1954], killing seven men and injuring 10 others.

The bodies of five servicemen were recovered. The heroic pilot, 1st Lt. Albert W. Parks of Cannelton, Ind., died later in the hospital. The body of another soldier aboard the plane was still missing in the ruins. Ten others, including four from the plane, somehow managed to escape with their lives and were rushed to the hospital with injuries. 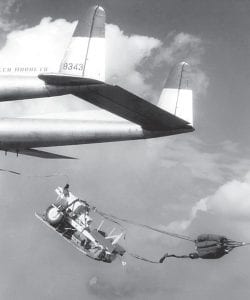 Officials here said that of the four crew members of the plane, the pilot was killed, two others were injured and one was missing. Three of the five Army passengers were killed and the other two injured. Of the seven men known to be in the mess hall, two were killed and five were injured. The 10th injured man was a rescue worker sprayed with flame when a gas tank exploded.

Eyewitnesses said the huge troopcarrier, listing badly from a burning engine, came roaring over the crowded “Smoke Bomb Hill” troop area at 10 a.m., struck the top of an officer’s barracks and skidded across the parade grounds into the mess hall. The plane exploded into flames and it was nearly two hours before firemen could bring under control the blaze that swept the building. Airman 1st Class Eugene R. Snyder, 23, of Donelson, Tenn., the flight engineer and the only crew member to walk away from the plane, said Parks gave orders for the men to prepare to jump as the plane lost altitude.

“The pilot told me to go back and tell the men to get ready to jump. When I got out of my seat,” Parks said. “I noticed we were very low. I asked if we were too low. About that time something hit. I looked out the window and saw a telephone pole go by and hit the left wing. Then I ducked down behind the pilot’s seat, put my head down and just rode it out.”

One officer who saw the crash said the pilot was trying to pull back on the controls as the plane roared down on the barracks area.

“He was trying to avoid hitting the barracks and get in at the best angle for a landing on the parade ground,” the officer said.

When the plane struck the roof of the bachelor’s officers quarters, its tail section was torn loose. The plane glided part of the way across the 150-yard wide parade field and then skidded about 100 feet into the mess hall. Soldiers rushed into the flaming mess hall moments after the crash and pulled three men from the rear section of the wrecked plane. However, it was nearly two hours before rescue workers could again get to the plane, which was buried under the charred timbers of the mess hall.

Lt. Col. B. A. Katz, another eyewitness to the crash, said it “appeared unbelievable that anyone could have survived, either in the plane or in the mess hall.”

“The pilot did a heroic thing trying to avoid hitting a barracks and in attempting to land in the open parade ground, thus saving as many lives as possible,” Katz said.

One officer said that if the plane had crashed two hours later, about 200 men would have been eating lunch in the mess hall.

The plane was from the 456th Trooper Carrier Wing based at Charleston AFB, and was involved in a paratrooper exercise at Ft. Bragg.