Crash kills one, hurts another 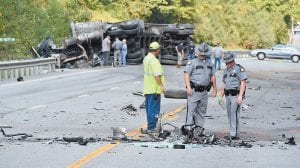 Kentucky State Police troopers examine debris left behind following a fatal crash on KY 15 near Isom. KSP Trooper Scott Caudill said the preliminary investigation into the crash indicated a Chevrolet pickup truck driven by 20-year-old Ethan Adams of Whitesburg was traveling southbound when his vehicle crossed the center line and collided nearly head-on with a northbound coal truck, which then overturned. Adams died at the scene. KY 15 was closed for about seven hours following the crash. (Photo by Chris Anderson)

A 20-year-old Isom man died Tuesday after his pickup collided with a tractor-trailer coal truck on KY 15.

The vehicles collided nearly head-on near the intersection of Del & Betty Drive, about a mile South of Isom on a three-lane section of KY 15. The coal truck overturned over a hill. The pickup stopped about 50 yards away. Letcher, Sandlick and Whitesburg firefighters had to extricate both drivers from their vehicles with Jaws of Life. Several bystanders assisted with the extrication.

The driver of the coal truck, Johnny Caudill, of Whitesburg, was trapped in his vehicle for nearly an hour as rescue workers attempted to cut away the truck cab to remove him. He was flown to Pikeville Medical Center with multiple injuries. The helicopter was unable to land at Isom due to fog, and had to be rerouted to a clear area on KY 15 at Redfox in Knott County.

Killed in the crash was Ethan D. Adams.

Kentucky State Police are in charge of the investigation.