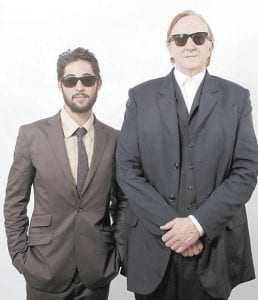 Ryan Bingham couldn’t have asked for a better introduction.

At a recent reception to celebrate the Oscar-nominated film “Crazy Heart,” Jeff Bridges turned to the crowd, leaned into the microphone and said, “Here’s the guy who saved the movie.”

The 28-year-old Bingham entered from the wings — joining an all-star band that included Bridges, Grammy-winning producer T Bone Burnett and esteemed sidemen like Marc Ribot and Buddy Miller — and played the song that has changed his life.

“The Weary Kind (Theme From ‘Crazy Heart’),” co-written with Burnett, has been nominated for an Academy Award, won a Golden Globe and created a success story that sounds made up by Hollywood.

For the former pro rodeo circuit competitor, the jump from well-regarded, but little-known alt-country artist to rising star and Oscar nominee has been like 8 seconds on a bull — fast, furious and completely unpredictable.

“This has kind of come out of left field, for sure,” Bingham said. “I had no idea this was going to happen. I was happy just being able to play music for a living and to survive that way.”

Before “Crazy Heart” director Scott Cooper chose him for a small role in the film, Bingham wasn’t doing too badly in his “band and a van” existence with his backing group, the Dead Horses. Critics liked the Los Angeles-based band’s first two Lost Highway albums, “Mescalito” and last year’s “Roadhouse Sun,” and Bingham’s big brown eyes, devilish good looks and raspy voice had many convinced that he would one day play for a wider audience.

And there never seemed to be a shortage of gigs with a generous helping of hardcore fans. But it was all hustle, all the time — not unlike the existence lived by Bad Blake, Bridges’ fading outlaw country icon.

The success of “Crazy Heart” will give Bingham opportunities that might have taken years to earn — or never come at all.

And it’s quite a context.

Bingham’s song will be played at the Oscars ceremony for an audience of tens of millions. Later in March, he and the band will go into the studio with Burnett, who’s known for creating surprise, Grammy-winning successes like the “O Brother, Where Art Thou?” soundtrack and the pairing of Robert Plant and Alison Krauss on “Raising Sand.”

Not bad for a guy whose music career started out in rodeo arena parking lots. He started riding steers when he was 11, moved up to bulls at 15 and spent a few years chasing a cowboy’s dream professionally, dragging his guitar around the Texas circuit.

“I was rodeoing and I was playing,” Bingham said. “Going on the road with my buddies and we’d just put the guitar in the back seat of the truck and just kind of make up songs as we were going down the road. We would play them in the parking lots of rodeos. And every now and then we’d sneak into a bar and play some songs.”

Eventually music replaced bull riding as his passion. His uncle persuaded him to record a handful of his songs so he could hear them when Bingham was away. A friend started handing discs around and Bingham started to build a grassroots following, especially with a live show that can turn incendiary.

Word of mouth proved to be a powerful marketing tool. After two hard-to-find self-released albums, he signed with Lost Highway and continued to build an audience, fan by fan.

Cooper heard the band and cast them to play a small part as a backing group for Bridges in one of the film’s comic high points. The director gave Bingham a script and told him if the mood struck him to try his hand at a few songs.

He eventually ended up in Burnett’s living room, solving a key problem for the film’s musical brain trust, which had yet to come up with a theme song.

“Ryan had been this guy who I’d heard about for probably over a year,” Burnett said. “Once a week somebody would show up and say, ‘Have you heard of this guy Ryan Bingham?’ I’d say, ‘No,’ and somebody else would ask me, and I’d say, ‘No, but I’ve heard of him,’ till finally it was like he was just in my living room playing this song that we all immediately said, ‘That’s it, there’s the song. Thank you for that.’”