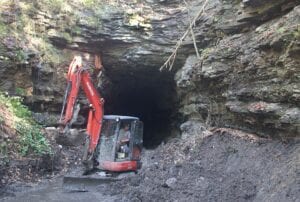 DIGGING ‘THE DUG HILL’ — Wade Whitehead uses an excavator to remove dirt from in front of the tunnel that runs under the driveway of the Whitesburg ARH Hospital. The city and the Letcher County Tourism Commission are partnering to build a new section of the Tanglewood Trail that passes through the 110-year-old railroad tunnel. (Photo by Sam Adams)

Crews are again digging on “The Dug Hill,” reopening the 110-year-old railroad tunnel that was closed and blocked with dirt by the late 1980s.

The tunnel passes through what is now known as Tunnel Hill, deep under the driveway to Whitesburg ARH Hospital. It connects Whitesburg and Ermine, and was once the site of the William S. “Bill Dug” Vermillion farm. The hill was called The Dug Hill in earlier times.

The Tanglewood Trail walking and biking path will pass through the tunnel and follow the bend in the river around Whitesburg ARH Hospital and back to the trail, just across the railroad bridge from the Upper Bottom.

“In talking with trail development people, you don’t want a trail that goes to nowhere,” said Missy Matthews, chair of the Letcher County Tourism Commission.

By putting a loop in the trail, hikers can circle back to the mouth of the tunnel or turn left back toward town. Plans are to later extend the trail up Pine Mountain to connect to the Pine Mountain Trail.

Matthews said the mud is expected to be removed within the next week, and then work can begin on graveling the trail on the section from the end of the old railroad bridge through to the Ermine end of the tunnel. Most of the trail from there back to Whitesburg River Park has already been graveled.

“The trail is something we’ve been working on, but nobody would see it,” she said.

Walking away from the park, the trail dips down from a road under a KY 15 Bypass bridge to the edge of the North Fork, and follows the river bank around the back of a vacant field across from the hospital, goes under a second highway bridge, and continues to skirt the river past Letcher Manor Nursing Home before doubling back to the mouth of the tunnel. From there, hikers can walk through the tunnel and down Tanglewood Trail all the way to KY 15 Business at Parkway Plaza.

Last week, Whitesburg City Manager Chris Caudill was driving a tracked dump truck back and forth along the muddy railroad right of way while another city employee loaded the truck with an excavator.

Construction on the original tunnel began in November of 1910 when W.J. Oliver Construction Co. of Knoxville, Tennessee brought in more than 125 black men and women from the Deep South to construct the railroad here.

On November 10, 1910, The Eagle published a story entitled “The Colored Man Arrives,” in which local citizens were called upon to welcome the 125 or so black men and women who had arrived to work on the Dug Hill tunnel. The report said the workers arrived “travel worn, dusty, sick and hungry, in wagons, dump carts, wheel scoops, horseback, straddle back and afoot.”

“Most of our people had only seen a (black person) occasionally,” the story continued, “and to see dozens of them along our streets was almost to them like going to a circus. … Two or three camps will be constructed at once, one above town on the Jenkins farm near the Dug Hill Gap. It is understood that most of the winter will be spent on the Dug Hill tunnel.”

While the article seems racist by today’s sensibilities, it was progressive because it urged residents to treat the black workers the same as they would any others.

According to Wikipedia, W.J. Oliver and Company built the railroad tunnel through Lookout Mountain in Tennessee, and was the initial winning bidder for construction of the Panama Canal in 1907. The bid award was controversial because of racial comments company owner William Oliver made publicly, stating that he preferred to hire Southern blacks because he felt they were better workers than people from China or the West Indies. The government later decided not to use a contractor, and Oliver lost the bid.

The Whitesburg Tunnel is carved out of solid rock, and is not lined with concrete as many other tunnels are. The entrance looks more like a cave than a manmade portal.