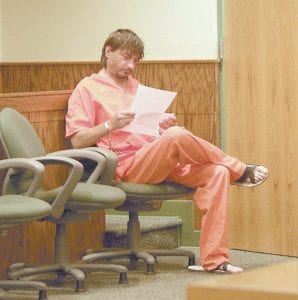 IN COURT EARLIER THIS WEEK – Accused murderer John W. Pigg Jr. looked over legal documents Monday after he was ordered to be held in the Letcher County Jail without bail by Letcher District Judge Jim Wood. Pigg is one of three persons accused of murdering an elderly Fleming-Neon man in Jenkins Sunday. (Eagle photo)

After he allegedly killed an elderly Fleming-Neon man in Jenkins early Sunday morning and hid the body with the help of two friends, police say a 37-year-old John W. Pigg Jr. drove to a Thornton home and began assaulting his estranged wife and young daughter.

After pulling the hair of his wife, Wendy, forcing her onto the floor and kicking her in the head, back, and shoulders, Pigg then set his sights on his young daughter, whom he pushed so hard he caused her back to be injured.

Police say that after finishing the assault on his family, Pigg left the home of his mother-in-law and was greeted at the Thornton bridge by a Kentucky State Police cruiser. In an attempt to evade arrest, Pigg floored the 1991 Toyota Camry he was driving and headed north toward Jenkins at speeds of over 100 miles per hour. While trying to round a steep curve on U.S. 119 near the entrance to Fishpond Lake, Pigg lost control of the Toyota and crashed into a southbound Ford Explorer occupied by Nicholas Meacham and his pregnant wife. 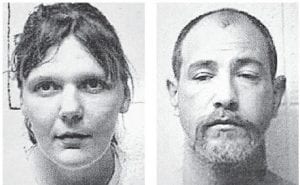 ALSO ACCUSED – Christina Collins of Millstone and Lloyd S. Pigg of Jenkins are also accused of taking part in the murder of Ralph Marcum, 70, whose body was found after being dumped in Pike County. Both are being held without bail in the Letcher County Jail.

These allegations in a bizarre crime spree said to involve Pigg, his cousin Lloyd S. Pigg, 37, of Jenkins, and Christina Collins, 31, of Millstone, are described in documents accusing the three of 18 criminal charges ranging from murder to alcohol intoxication in connection with the April 12 beating death of 70-year-old Ralph Marcum of Goose Creek.

The two Piggs and Collins were charged with murder at 8:30 p.m. on Sunday, about 15 hours after they allegedly beat 70-year-old Ralph Marcum to death with a hammer and dumped his body over an embankment near Myra in Pike County.

Funeral services for Marcum, a Vietnam War veteran and former member of the Fleming-Neon Utilities Commission, will be held Thurs day at 1 p.m. at Carty Funeral Home in Neon. Military honors will be performed by the Pound, Va., Veterans of Foreign Wars.

Authorities say Marcum was murdered inside a wooden shed in which Lloyd Pigg was living beside his mother’s house at 178 B&O Hill in Jenkins. The mother called Jenkins City Police to the scene early Sunday morning after she saw a large amount of blood on a wheelchair ramp leading to the building. Lloyd Pigg is handicapped. 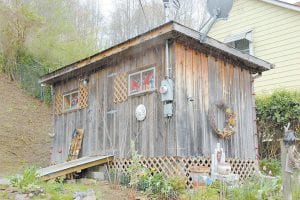 CRIME SCENE – Police say Ralph Marcum, 70, of Fleming-Neon died after he was beaten with a hammer in this shed in which Lloyd Pigg lived beside his mother on B&O Hill. Jenkins City Police were called to the scene Sunday morning after the mother saw a large amount of blood on the wheelchair ramp leading into the building. (Photo by Chris Anderson)

The three suspects were arraigned separately at a hearing before Letcher District Judge Jim Wood on Monday. After the three entered pleas of not guilty, Wood scheduled preliminary hearings for April 23 at 10:30 a.m.

Police apparently were led to the location of Marcum’s body after Christina Collins was arrested while walking along KY 317 near Deane, on the Fleming- Neon side of the road’s junction with KY 1469. Kentucky State Police Sergeant Barry Engle and Jenkins Police Chief Jim Stevens were looking for John Pigg, who had been living in the Deane area since he split up with his wife, when they saw Collins and stopped to question her.

Court documents say that when Engle and Stevens began questioning Collins they “noticed (the) strong odor of alcoholic beverages on her breath” and her “unsteady walk and slurred speech.” The documents say that Collins had two prescription pain pills in the front pocket of her jeans, and that “also on her jeans was blood.”

Collins “could not explain why the blood was on her pants,” Engle wrote in a post-arrest complaint. “Later (we) discovered (she was) involved in a murder.”

In addition to complicity to murder, Collins was also charged with alcohol intoxication and possession of prescription drugs not in their proper container. In a complaint charging Collins with complicity to murder, KSP Detective Clayton Stamper wrote that Collins “was at Lloyd Pigg’s house when (Ralph) Marcum was murdered. Subject admitted to carrying the body out and putting it in a car. A witness stated that subject also helped throw (the) body over an embankment.”

A complaint charging Lloyd Pigg with complicity to murder says Lloyd Pigg was in his home “when (Ralph) Marcum was murdered,” and that Lloyd Pigg “went with two other subjects to where body was dumped.”

In a murder complaint filed against John Pigg, Detective Stamper says John Pigg “struck (Ralph) Marcum in the head with a hammer at Lloyd Pigg’s house on B&O Hill in Jenkins. Subject then assisted in disposing of the body at a location in the Dorton area of Pike County. Witnesses stated John Pigg had hit subject, causing his death.”

John Pigg is also charged with two counts of second-degree assault and two counts of first-degree wanton endangerment for his wreck involving Mr. and Mrs. Meacham. The Meachams’ address was not included in the court documents, which also indicate that Mrs. Meacham was taken to the Whitesburg hospital after complaining of stomach pains involving her pregnancy.

The wreck with the Meachams resulted in John Pigg also being charged with reckless driving, operating a motor vehicle under the influence of alcohol or drugs, fleeing or evading police, and failure to wear a seat belt.

John Pigg was scheduled to appear before Judge Wood again today (Wednesday) to answer charges that he violated an emergency protective order when he visited the home of his motherin law at Thornton. He also faces two counts of fourth-degree assault, one count of third-degree terroristic threatening, and one count of first-degree criminal trespass as a result of the incident involving his wife and daughter.

A friend of Ralph Marcum said Monday there was no truth to rumors that Marcum was suffering from cancer at the time he was murdered. The friend, Ivan Hall, said that while some people have theorized that Marcum was being robbed of pain pills prescribed to him for cancer, that was not the case.

Hall said he recently helped Marcum prepare a disability claim to be filed with the Veterans Administration, but that the claim made no mention of cancer. He said Marcum suffered from lung disease.

“He had a hard time breathing,” Hall said of Marcum, who in addition to serving in Vietnam was a sergeant first-class in the Army Reserves for many years.

“He was a good fellow,” Hall remembered on Tuesday. “He would tell you what was on his mind.”