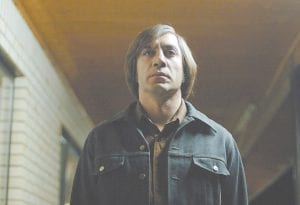 This file photo released by Miramax shows actor Javier Bardem as Anton Chigurh in a scene from “No Country for Old Men.” (AP Photo/Miramax Films)

Years pass and tastes change, at least a little. In choosing their top films of the past decade, Associated Press movie critics David Germain and Christy Lemire stuck closely to their favorites from each year.

But here and there, a film that came in a bit lower on their list at the time has crept up in their esteem to make their cut for best of the decade.

Here are their picks, along with the ranking each film had on their annual top-10 lists from years past.

The top 10 films of the decade, according to AP Movie Writer David Germain:

1. “Pan’s Labyrinth” (No. 1 for
2006) —
Writer-director Guillermo del Toro presents a wondrous hybrid of stark historical drama and wildly inventive fantasy in this saga of a girl (Ivana Baquero) whose encounter with an ancient forest spirit offers escape from her bleak life in 1944 Fascist Spain. The chilling images are as fanciful as anything Terry Gilliam’s ever dreamed up, and the film offers a marvelously ambiguous finale that could be the downer of the year — or pure bliss.

2. “You Can Count On Me”
(No. 1 for 2000) —
The perfect script meets the perfect cast. Writer-director Kenneth Lonergan captures the essence of sibling unity and disharmony in a taut comic drama propelled by tremendous performances from Laura Linney and Mark Ruffalo. This small-budget Sundance prize winner is wistful, hopeful, celebratory and hauntingly sad all at once. On screen, family matters don’t get more exquisite than this.

3. “The Barbarian Invasions”
(No. 1 for 2003) —
Sentiment and cynicism in perfect blend. Writerdirector Denys Arcand crafts a sly sketch of intellectuals who’ve grown emotionally jaundiced by trying times yet still throw a whale of a party, in this case, for a dying pal (Remy Girard). His reconciliation with an estranged son (Stephane Rousseau) and final farewell to loved ones is heartbreaking, while Marie-Josee Croze brings a sublime damaged-goods grace as a junkie who scores heroin to ease the dying man’s pain.

4. “Once” (No. 2 for 2007) —
This may be as real as new love gets on screen: Awkward, inspiring, nervous, hopeful, passionate, impossible, frustrating, and in the end, left in limbo for another day. The micro-budgeted tale from writer-director John Carney stars two non-actors, musicians Glen Hansard as an Irish busker and Marketa Irglova as an Eastern European immigrant. They meet, fall head over heels and, literally, make beautiful, Academy Awardwinning music together.

5. “O Brother, Where Art
Thou?” (No. 7 for 2000) —
A Klan rally that resembles the march of the Wicked Witch’s guards in “The Wizard of Oz”? Must be the Coen brothers. Their Depression-era take on “The Odyssey” is a Looney Tunes successor to “Sullivan’s Travels” that lets George Clooney go deliriously over the top as leader of a Three Stooges-style trio hilariously rounded out by John Turturro and Tim Blake Nelson. With T Bone Burnett as maestro, the savory songs brought on a roots-music revival that continues today.

6. “The Hurt Locker” (No. 1
for 2009) —
The first great Iraq War film proves so universal that it can stand among the classics from past wars. Director Kathryn Bigelow drops viewers in at ground zero for a disturbingly close and claustrophobic look at the strains of disabling bombs for a living. Ably supported by Anthony Mackie and Brian Geraghty, Jeremy Renner is fierce, slow, frightening and tragic as a sergeant so addicted to the adrenaline rush of defusing explosives that he can no longer conceive of another way of life.

7. “The Saddest Music in the
World” (No. 1 for 2004) —
Filmmaker Guy Maddin spins a blissfully twisted tale of a legless Depression era beer baroness (Isabella Rossellini) who stages a contest to find the world’s gloomiest tunes, and a can-do American (Mark McKinney) determined to win the prize for the Yanks. The distorted black-and-white images and demented music perfectly complement Maddin’s absurdist tone.

8. “WALL-E” (No. 2 for 2008)
—
If we all had this plucky little robot’s work ethic, we wouldn’t have fallen into a recession. The animation masters at Pixar have delivered a true innovation, a robot love story tucked in a cautionary environmental tale wrapped in a sci-fi saga, with romantic leads who communicate adorably in mechanical beeps and squeals. The title character of Andrew Stanton’s adventure is beyond endearing as he toils alone to clean up filthy old Earth after everybody else has left.

9. “Adaptation” (No. 1 for
2002) —
“Being John Malkovich” writer Charlie Kaufman and director Spike Jonze succeed splendidly in creating a film about absolutely everything. Their tall tale of an insecure screenwriter is a spot-on rendering of artist self-loathing, and through cryptic philosophizing becomes a universal story on adapting to life. Nicolas Cage is at his best since “Leaving Las Vegas,” with great support from Meryl Streep and Chris Cooper.

10. “Moulin Rouge” (No. 1 for
2001) —
Sting’s “Roxanne” as an ominous tango? This IS the reinvention of the Hollywood musical. As director Baz Luhrmann notes of heroine Nicole Kidman, “She sings, she dances, she dies. … She’s broad comedy and high tragedy.” Kidman and co-star Ewan McGregor are corny, endearing, passionate and doomed in this dazzling pop-tune grab-bag that busts up the joint by tossing all musical conventions out the door.

1. “No Country for Old Men”
(No. 1 for 2007) —
This breathtaking saga of crime and carnage along the Rio Grande emerges as the Coen brothers’ masterwork among their bold and eclectic filmography. In adapting Cormac McCarthy’s novel about the repercussions of a ruined drug deal, Joel and Ethan Coen (and the great cinematographer Roger Deakins) have created an evocative, beautifully bleak landscape. Josh Brolin and Tommy Lee Jones both give subtly powerful performances, but Javier Bardem is chilling in his Oscar-winning supporting turn as an eccentric serial killer.

2. “There Will Be Blood” (No.
6 for 2007) —
An inventively gorgeous yet wildly weird epic about greed, lies, manipulation and insanity, with a terrifying leading performance from Oscar-winner Daniel Day-Lewis as a ruthless California oil man. Except for its inescapable intensity, you’d never know this was a Paul Thomas Anderson movie. All his usual stylistic tricks are gone; the “Boogie Nights” and “Magnolia” director seems more focused on character and storytelling, and he leaves you gasping.

3. “American Splendor” (No.
1 for 2003) —
A film unlike any other that year, and perhaps unlike any other, period. Wildly ambitious and imaginative, and consistently successful. Part feature and part documentary with some animation tossed in, the story of cranky comic book writer Harvey Pekar is full of sharp comic observations. As Pekar, Paul Giamatti is vividly funny and sad, usually at the same time.

4. “Far From Heaven” (No. 1
for 2002) —
This would have been one of the best films of 2002 based solely on its exquisite cinematography and production design. Add Julianne Moore’s complex performance and writer-director Todd Haynes’ keenly observant script, both Oscar-nominated, and you have a movie that’s nearly flawless. Haynes’ loving homage to the Technicolor female-driven melodramas of the 1950s looks and feels so authentic, it makes you forget you’re watching a new movie.

5. “Sideways” (No. 1 for 2004)
—
Also starring Paul Giamatti, further proving that beneath his character actor looks lie the talent and versatility of a leading man. Disarmingly written and beautifully cast, with equal amounts of humor and heart, Alexander Payne’s middle-aged, coming-of-age tale of loneliness, love of wine and unlikely relationships resonates long after the lights go up. Superb supporting work from Virginia Madsen, Thomas Haden Church and Sandra Oh.

6. “Memento” (No. 3 for 2001)
—
Told backward, writer-director Christopher Nolan’s revenge thriller leaves you reeling over what you just saw — or didn’t see. Its narrative approach is ingenious (and turned out to be hugely influential), and it must have been incredibly hard to craft and make all the details fit. As a man seeking revenge for his wife’s murder, Guy Pearce is dark and tormented. And in supporting roles, Carrie-Anne Moss and Joe Pantoliano are perfectly mysterious.

7. “Mystic River” (No. 7 for
2003) —
A modern-day Shakespearean tragedy, this is one of Clint Eastwood’s best ever as director, more haunting over time than even his 2004 best-picture winner, “Million Dollar Baby.” A gripping, gorgeous film about revenge, friendship and lost innocence in a richly detailed Boston setting. Excellent performances from an incredible cast: Sean Penn, Tim Robbins, Kevin Bacon, Marcia Gay Harden and Laura Linney.

8. “The Squid and the Whale”
(No. 1 for 2005) —
There isn’t a false note in this darkly funny story about married writers who are divorcing, and how the split affects their sons. Writer-director Noah Baumbach’s film, loosely based on his own ’80s adolescence in Brooklyn, is poignant and observant, hilarious and achingly sad. Jeff Daniels is perfect as the pompous patriarch whose glory days have long since passed; he gets excellent support from Laura Linney as his wife and Jesse Eisenberg and Owen Kline as their confused kids.

9. “WALL-E” (No. 5 for 2008)
—
Pixar’s masterpiece. The animation company maintains its impeccable track record with this irresistible, visually marvelous tale of the last robot on Earth. It’s groundbreaking in its simplicity. Although the little guy and his lady love, Eve, exchange maybe three words total, director Andrew Stanton is resourceful enough to find infinite ways for them to express themselves.

10. “Wonder Boys” (No. 10 for
2000) —
Michael Douglas shines in the unlikely role of an English professor and novelist who’s stuck, personally and professionally. The acting is categorically strong from a talented ensemble cast, especially Robert Downey Jr. The dialogue is insightful, the characters feel achingly real, and although the story takes place over a wild weekend, the situations never seem forced in director Curtis Hanson’s hands. It’s one to stop and watch every time it comes on TV.