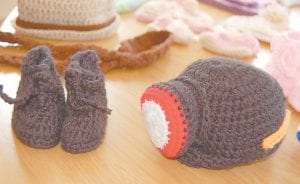 This version of a coal miner’s safety cap and lamp and miner’s boots are among the most popular items being crocheted by Alice Craft of Little Cowan.

If you can think of a design for winter hat, chances are Alice Craft can crochet it for you.

Craft, of Little Cowan, is an artist with the Appalachian Artisan Center in Hindman, where she has been concentrating in fiber art for the past decade. She is able to crochet many items well, but the hats and scarves she creates are the most popular.

Craft, who is a staff assistant at the Letcher County Cooperative Extension Office in Whitesburg, learned how to crochet from her mother while still a child. The art of crocheting is similar to knitting, but requires the use of a single hooked needle instead of two knitting needles.

Craft first tried to learn how to quilt when she was a child, but chose crocheting instead.

“When I was a young girl, my mom was an excellent quilter,” said Craft. “I tried and I got fired real fast because my stitches were too big.”

It was then that Craft’s mother showed her how to crochet a granny square for an afghan, which she enjoyed. After she became a parent herself, Craft couldn’t find much time to continue her hobby. After her children began having children of their own, Craft started crocheting items for her grandchildren. 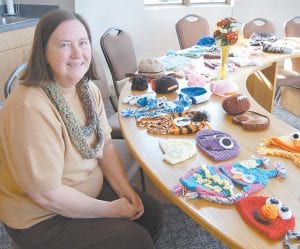 Alice Craft, of Little Cowan, is seen with some of the original items she has crocheted. The photograph was taken last week at the Letcher County Cooperative Extension Office in Whitesburg, where Mrs. Craft works.

“Probably about 20 years ago I really got back into doing it,” said Craft. “I had more time then. Things were more settled down.”

She has crocheted hundreds of pieces since. Because Craft never uses a pattern, each piece she crochets is an original. No two pieces will be exactly the same.

“I don’t crochet from a pattern,” said Craft. “I don’t even know how to read from a pattern. If I am looking from a picture, I’ll tweak it a little bit.”

Hats crocheted for babies are her top sellers, with owls and sock monkeys being the most requested in 2012. A hat based on Thomas the Tank Engine is also popular. Craft has made about seven of those hats recently. She said the train hat is a hard one to crochet. 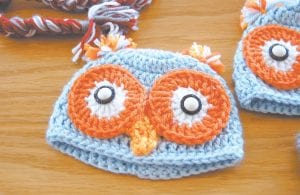 Alice Craft said crocheted owl hats have been among of her most popular items for sale this year.

“The detail on them is intense,” said Craft.

She also has crocheted Spiderman hats, Batman hats and hats based on the Dr. Seuss book “The Lorax.”

“Oh, I love it,” she said. “It is gratification. It makes me feel good that they think my stuff is good enough for their newborns to wear.”

Crocheted versions of coal mine safety caps and lamps and boots for little babies are also popular sellers for Craft. She said she enjoys seeing fathers in their mining uniforms posing for photographs with their newborns wearing her creations, each of which she calls a challenge.

“It’s hard to lay it down until I can see what it ends up looking like,” said Craft.

Many of Craft’s creations are priced at around $25, but can go up from there depending on how complicated the project is.

She said a photographer from Nevada saw her work on Facebook recently and asked her to crochet something for a baby to wear for a photo shoot. Craft has also crocheted baby hats, diaper covers and booties at the request of two photographers in Hazard, one in Pikeville, one in Frankfort and several in Letcher County.

Craft enjoys giving a helping hand to those who want to learn the art of crocheting and those who may be somewhat experienced at the craft but still run into problems.

“This is a lost heritage,” she said. “Our grandmothers did this. Anytime I get someone who is interested I am pleased to help them.”

Craft said crocheting takes lots of practice but is worth the effort for beginners.

“If they really get joy out of doing it, they can pick it up and go on,” she said.

While crocheting helps Craft to relax and makes the hours pass by more quickly, it has also provided her with some comic relief.

A couple of winters ago, Craft crocheted Sesame Street character hats including Big Bird, Cookie Monster and Oscar the Grouch for men who worked for the Whitesburg Water Department.

“One at a time these grown men came and asked for the hats,” she said. “It was cold and it kept their ears warm. It was kind of funny to see them wearing the hats around town.”

Craft said she has accumulated too many colors of yarn at her home to count. Instead of putting a number on her collections, she says she has baskets full of yarn.

“It helped out when people started buying them so I could support my habit,” said Craft.

She buys dresses at yard sales and uses the vintage buttons for the “eyes” required on animal and character hats she crochets.

In addition to yarn, Craft crochets with twine and plastic bags. She also makes infinity scarves, necklaces and carrying bags.

Her work is offered for sale at The Clapboard House in Wise, Va., and at Raegan’s Closet in Whitesburg.