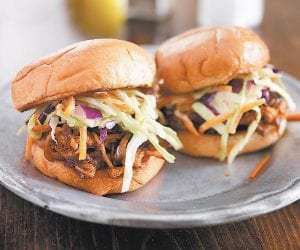 The meat for these crowd-pleasing easy Barbequed Pulled-Pork Sandwiches is prepared in a crockpot.

My father was born and raised in Winston-Salem, N.C., the perfect place to find a delicious pulled-pork barbeque sandwich. The Piedmont triad area where he grew up is famous for its pork barbeque and highly seasoned, vinegar-based sauces. Pigs are plentiful in that area of the South, so barbeques featuring the whole pig — split open and roasted over a hardwood charcoal fire, or using just the pork shoulder — are popular. After the meat is cooked, it’s “pulled” off the bone by hand, sliced, shredded or chopped into pieces, mixed with barbeque sauce and served on a bun.

Pork shoulders are the front leg of the pig and are fairly inexpensive cuts of meat. The shoulder includes two cuts: the Boston butt, which is a rectangular roast from the upper part of the front leg, and the picnic shoulder. The Boston butt is the cut of choice for pulled-pork sandwiches.

Select a Boston butt that has a white-fat cap and is marbled with fat throughout the meat. The fat and the collagen (the connective tissue) “baste” the meat as it melts away. The collagen also turns into simple sugars that make this typically tougher cut of meat moist, tender and flavorful as it slowly cooks.

Pulled-pork barbeque sandwiches were used to entice potential voters to attend political rallies. These flavorful sandwiches definitely have my vote. This crockpot recipe for pulled pork is perfect for anyone who can’t barbeque the traditional way. Serve the pulled pork with a scoop of coleslaw on the sandwich or on the side, along with some baked beans, corn on the cob and sweet, lemon-flavored iced tea, and you’ll have the makings of a Southern-style barbeque no matter where you live!

This recipe is a great way to tenderize an inexpensive cut of meat and conserve energy by using a crockpot. The salsa infuses the meat with flavor while it cooks, and the barbeque sauce is the perfect finish. You’ll have enough pulled pork to feed a crowd, or you can freeze any leftovers for another fabulous meal!

1. Place half the onions in the
crockpot. Add the meat and then
the rest of the onions. Pour the
salsa and the water over the pork
and the onions.
2. Turn the crockpot to the
HIGH setting for 4 to 5 hours or on

the LOW setting for 7 to 9 hours or
until the pork is tender and can be
shredded easily with a fork.
3. Remove the pork and onions
from the crockpot and discard
any of the remaining liquid and
accumulated fat. Let the meat
cool slightly. Shred the pork, using

two forks. Mix together the
barbeque sauce, vinegar, mustard,
brown sugar and salt until wellcombined. 4. Mix the shredded pork and
onions with the barbeque sauce.
Return the barbequed pork to the
crockpot and cook on HIGH for

another hour. Serve about 1/2 cup
shredded pork in each roll. Top
with coleslaw, if desired. Serves 24.
Angela Shelf Medearis is an
award-winning children’s author,
culinary historian and the author
of seven cookbooks.